In the past 25 years,  several million women have been treated with tamoxifen. Currently, the recommended duration of adjuvant tamoxifen treatment in women with breast cancer is 5 years.

In the National Surgical Adjuvant Breast and Bowel Project P-1 trial, which included patients at increased risk for the development of breast cancer and which examined the value of tamoxifen in preventing second breast cancers, patients were randomly assigned to receive either tamoxifen 20 mg daily or placebo. The cumulative rate of endometrial cancer was 13.0 cases per 1,000 women in the tamoxifen group and 5.4 cases per 1,000 women in the placebo control group.

Recently, results of the Study of Tamoxifen and Raloxifene showed that another selective estrogen receptor modulator,  raloxifene,  is as effective as tamoxifen in reducing the incidence of breast cancer in postmenopausal women who are at increased risk for the disease and is associated with a lower risk of endometrial cancer (Land et al., 2006). Women who were randomly assigned to take raloxifene had 36% fewer uterine cancers than the women assigned to take tamoxifen. It is postulated that raloxifene may become more widely used than tamoxifen for breast cancer prevention in the near future. 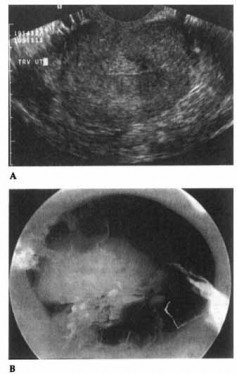 Figure 15-2.  Endometrial polyp as seen on vaginal sonography (A) and hysteroscopy (B).

Table 15-4  shows the American College of Obstetrics and Gynecology guidelines for care of patients undergoing treatment with tamoxifen (ACOG, 2006).

Table 15-4.  American College of Obstetrics and Gynecology Recommendations for the Care of Women Taking Tamoxifen.

Figures 15-2A and 15-2B show an endometrial polyp as seen on vaginal sonography and hysteroscopy, respectively.

Some investigators have utilized transvaginal pulse Doppler color flow imaging and have concluded that it does not contribute to the assessment of asymptomatic postmenopausal breast cancer patients treated with tamoxifen. Another technique often utilized is sonohysterography.  This involves filling the endometrial cavity with saline under sonographic visualization, thus distending the cavity and allowing more effective analysis. Sonohysterography is particularly useful for delineating polyps and space-occupying lesions, such as submucosal myomas, and for identifying a thickened endometrium (Figure 15-3).