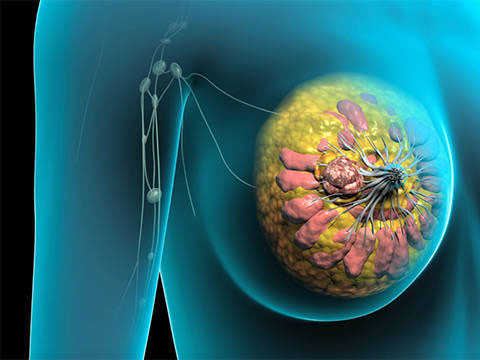 A study led by Loyola Medicine researchers may help reassure patients who worry the breast cancer drug tamoxifen could increase their risk of uterine cancer.

The multi-center study was presented during the 2016 annual meeting of the American Society of Clinical Oncology at McCormick Place in Chicago. First author of the study is Kathy S. Albain, MD, FACP, FASCO. The study’s co-principal investigator is Ronald K. Potkul, MD, FACS, FACOG. Dr. Albain is a professor in the department of medicine, division of hematology/oncology, and Dr. Potkul is chair of the department of obstetrics and oncology of Loyola University Chicago Stritch School of Medicine.

The study enrolled 296 eligible postmenopausal breast patients with a type of early-stage breast cancer called estrogen receptor-positive. Patients were randomly assigned to take tamoxifen alone or tamoxifen plus the hormone progestin. They were followed and assessed at years two and five. Researchers predicted that taking progestin would decrease the risk of abnormalities that can develop into uterine cancer. Such abnormalities occur in the endometrium (inner lining of the uterus).

At year two, the primary time point, researchers evaluated 89 women who took tamoxifen alone and 80 women who took tamoxifen plus progestin. There were five endometrial abnormalities in the tamoxifen-alone group and one abnormality in the tamoxifen-plus-progestin group. This difference was not statistically significant. All abnormalities were benign. Only one additional benign abnormality was found at five years. No cancers were detected at two years or five years.

Dr. Albain said the reason the abnormality rate was much lower than expected most likely was due to the study’s screening requirements. All women recruited for the study underwent uterine ultrasound exams before taking tamoxifen. If the ultrasounds showed a thickening of the inner lining of the uterus greater than 5 mm, a biopsy was performed. If the biopsy showed an endometrial abnormality, the woman was excluded from the study.

“For women who are concerned about taking tamoxifen to treat or prevent breast cancer, our study suggests that a normal ultrasound before treatment may provide additional reassurance,” Dr. Albain said.

Tamoxifen is a highly effective drug that is used both to treat breast cancer and help prevent breast cancer in healthy women who are at high risk of developing the disease.

“However, many women who would benefit from taking tamoxifen fail to do so because they fear getting endometrial cancer,” Dr. Potkul said. “Our study found that for women who did not have endometrial abnormalities when they began taking tamoxifen, there was a very low rate of developing pre-malignant conditions.”

The median age of the women in the study was 59.5 years. They underwent endometrial ultrasounds at the beginning of the study and after two years and five years. After two years, 67 percent of the women in the tamoxifen-alone group had a thickening of the inner lining of the uterus greater than 5 mm, compared with 60 percent of the women in the tamoxifen-plus-progestin group. This difference was not statistically significant. All women who had a thickness greater than 5 mm underwent subsequent biopsies. The biopsies revealed five cases of endometrial abnormalities in the tamoxifen group: four cases of proliferative endometrium (more cells than normal lining the uterus) and one case of simple hyperplasia (non-malignant clumping of cells). One woman in the tamoxifen-plus progestin group had an abnormality (proliferative endometrium). None of the abnormalities in either group developed into uterine cancer.

Although there were more endometrial abnormalities in the tamoxifen-alone group, the difference was not large enough to be statistically significant. It would require a follow-up trial with thousands of women to determine whether adding progestin to tamoxifen truly reduces the risk of uterine cancer, researchers concluded.

The study was funded by the National Cancer Institute (NCI) and administered by SWOG, a global network of researchers who design and conduct cancer clinical trials. SWOG (formerly the Southwest Oncology Group) is one of the five cooperative groups in the NCI’s National Clinical Trials Network.