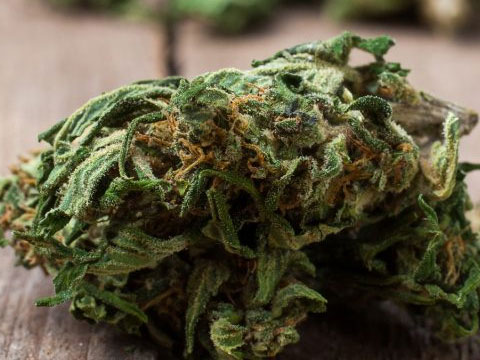 Heavy marijuana use is associated with cognitive decline in about 5% of teens, according to a new study, which suggests that the heaviest users could lose 8 IQ points.

In the report, published in the Proceedings of the National Academy of Sciences, research conducted in New Zealand showed that teens who started smoking marijuana before age 18 and were diagnosed as being addicted to cannabis by age 38 experienced an IQ drop in early adulthood. But users who began smoking after age 18 - even if they used heavily - did not show a significant decline.

“The effect of cannabis on IQ is really confined to adolescent users,” says lead author Madeline Meier, a postdoctoral researcher at Duke University, “Our hypothesis is that we see this IQ decline in adolescence because the adolescent brain is still developing and if you introduce cannabis, it might interrupt these critical developmental processes.”

The authors followed 1037 children born in the town of Dunedin, New Zealand in 1972 and 1973, virtually every child. They defined adolescent use as at least weekly use before turning 18. In looking at the relationship between marijuana use and IQ, they controlled for factors like years of education, schizophrenia and use of alcohol or other drugs that might also have an effect on IQ. While education weakened the relationship, it still did not eliminate it.

Researchers also had family members and friends of the participants confidentially rate them on attention and memory skills and those who had lost IQ points showed problems in these areas. Meier notes that an 8 point decline in IQ for someone with average intelligence (an IQ score of 100; the 50th percentile) would move that person down to the 29th percentile. “It’s fairly substantial but it does depend on where you start out,” she says.

Legality of cannabis by U.S. jurisdiction
The use, possession, sale, cultivation, and transportation of cannabis (marijuana) in the United States under federal law is illegal but the federal government has announced that if a state wants to pass a law to decriminalize cannabis for recreational or medical use they can do so, but they need to have a regulation system in place for cannabis. Cannabis is listed as a Schedule I substance under the Controlled Substances Act of 1970, the highest classification under the legislation. This means that the substance has been claimed by the U.S. federal government to have both high abuse potential and no established medical use.

”I think this is the cleanest study I’ve ever read” exploring the long term effects of marijuana use, Dr. Nora Volkow, director of the National Institute on Drug Abuse, told the Associated Press.

Continual large amounts of cannabis, however, makes people quite boring, curiously tired, underachieving and cosy in the eco-climate of their less than lemon-fresh underwear. It’s one of the worst drugs. At least MDMA tempts one to leave the house and enter clubs or dark raves, chat to strangers and imagine oneself, temporarily, as a heavenly creature lighting up dance floors.

At least acid tends eventually to give people a big scare that stops them ever repeating the drug. Heavy cannabis users just trudge on and on - often from teen years to adult life - in one long spliffy groundhog day. Men: try adding “I smoke a lot of weed” to your internet dating profile and enjoy your long stoned walk in the sexual Gobi desert. Sane women have no interest in long-term heavy cannabis users as weeping “But, Zane, you said we’d go to Ikea the last five weekends!” at a lump in a tracksuit with unclipped werewolf-style toenails is terminally wearing. “Freeing the weed” is not one of my political views. Weed made me listen to Morcheeba. I can’t forgive it for that. Obviously, trendy liberal types like me (apparently this is what I am, according to my mailbag) aren’t supposed to say this as this would be “getting tough on drugs”, which I have no plans to do. Massive weed smokers don’t need our anger or penal strength, they need our gentle and merciless derision. I suggest you start by typing the words “Puff Puff Give” by HannaH’s Field into YouTube and savour the toke-tastic twaddle of a pro-weed smoker bashing away on bongos, proclaiming that weed “comes from the earth, the earth can’t hurt” (HannaH was stoned the day her school was teaching her about Deadly Nightcap mushrooms and the contaminated earth around Sellafield).

“The overall implication is that when you’re talking about marijuana, you have to take into account age of onset of use and dealing with developing, growing brains,” says Meier.

Not all experts agree, however. “Scientifically, these are extremely preliminary findings,” cautions Carl Hart, associate professor of psychology at Columbia University, who has studied the cognitive effects of marijuana in humans in the lab and was not associated with the research. (Disclosure: he and I are working on a book project together).

California
In July 1975, Governor Jerry Brown enacted Senate Bill 95, which reduced the penalty for possession of one ounce (28.5 grams) of cannabis or less to a citable misdemeanor.

On November 5, 1996, California became the first state in the United States to legalize medical marijuana when the voters passed Proposition 215 by 56%.

On September 30, 2010, Governor Arnold Schwarzenegger signed Senate Bill 1449 which further decriminalized the possession of 1 ounce or less to a civil infraction leading to no jail time and punishable by a maximum $100 fine.

Hart notes that because only 38 people in the study -  around 8% of those who ever tried marijuana -  used it heavily enough to get diagnosed with dependence during several follow-up periods, he is skeptical about how generalizable the results are. He says that in his studies of people who smoke at least three times a week, “When you compare these people’s scores to a normative database on a wide range of domains including executive function, memory, and inhibitory control, they score dead smack in the middle, in the 50th percentile.”

Canadian researchers have assessed how IQ changes after smoking cannabis.

They were first tested between nine and 12 years old and again at 17 to 20. The IQs of those who smoked more than five joints a week dropped by an average of four points.

Such an effect could dramatically increase the number of people considered to have low intelligence, if they all smoked cannabis.

There are also other factors - such as child abuse or other trauma  - that might lead people to seek escape in heavy marijuana use and could also affect brain function. Meier and her colleagues did not examine these factors but say it’s possible that such elements could explain the results better than marijuana itself.

If the link is real, the effects on cognition could be dramatic. But intelligence and cognition is affected by a plethora of other factors, including genetic, social and environmental influences that may supersede any influence from drug use. Despite the fact that the average marijuana user starts at age 17 in the U.S and nearly 7% of high school seniors currently smoke pot every day, IQ scores have risen tremendously over time in all developed countries in recent years. Most of those same countries also experienced a massive increase in marijuana use between the 1950s and today.