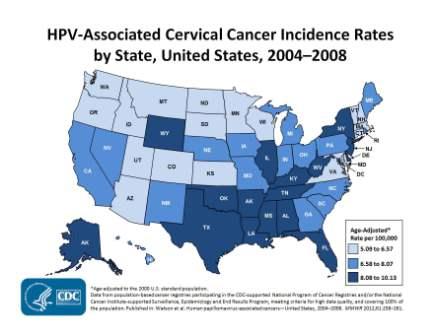 Cervical cancer rates in the United States are higher than previously believed, particularly among 65- to 69-year-old women and African-American women, according to a study led by a researcher at the University of Maryland School of Medicine published in the journal Cancer. Current U.S. cervical cancer screening guidelines do not recommend routine Pap smears for women over 65 if their prior test results have been normal.

Previous research finds an age-standardized rate of about 12 cases of cervical cancer per 100,000 women in the United States, with the incidence reaching a peak at age 40-44 and then leveling off. However, these estimates included women who had hysterectomies in which the lower part of the uterus, the cervix, was removed. By excluding these women, who are no longer at risk of developing this cancer, from their analysis, the researchers calculated a rate of 18.6 cases of cervical cancer per 100,000 women. They found the incidence increased steadily with age and peaked at a higher rate and at an older age, specifically in women 65-69 years old.

“The higher rates of cervical cancer after correction for hysterectomy highlight the fact that, although a large proportion of cervical cancer has been prevented through early detection and treatment, it remains a significant problem,” the authors conclude. Human papillomavirus (HPV) infections cause virtually all cervical cancers, and the researchers stress the need for widespread HPV vaccination to protect women against the virus.

“Our corrected calculations show that women just past 65, when current guidelines state that screenings can stop for many women, have the highest rate of cervical cancer,” says the study’s lead author, Anne F. Rositch, Ph.D., M.S.P.H., an assistant professor of epidemiology and public health at the University of Maryland School of Medicine and a researcher at the University of Maryland Marlene and Stewart Greenebaum Cancer Center. “It will be important to consider these findings when reevaluating risk and screening guidelines for cervical cancer in older women and the appropriate age to stop screening.” Patti E. Gravitt, Ph.D., a professor in the Department of Pathology at the University of New Mexico Health Sciences Center, is the senior author.

The researchers say that failing to correct for hysterectomies not only underestimates the true incidence of cervical cancer but also results in misleading race and age-specific comparisons.

Dr. Rositch adds, “It will be important to clarify in future studies whether the continued increase in cervical cancer rates with age and the higher rates in African-American women represent a failure in our screening programs or a failure of the women to be screened so that appropriate interventions can be applied.”

E. Albert Reece, M.D., Ph.D., M.B.A., vice president for medical affairs at the University of Maryland and the John Z. and Akiko K. Bowers Distinguished Professor and dean of the University of Maryland School of Medicine, says, “Although we have made tremendous progress in preventing and detecting cervical cancer in its earliest stages, we may not have fully understood the incidence among older women and African-American women. This latest research underscores the importance of caring for a woman’s obstetric and gynecological health throughout her entire life, and not only focusing on preventive health measures during her reproductive years.”

The researchers analyzed data on cervical cancer from 2000 to 2009 from 18 registries within the Surveillance, Epidemiology, and End Results (SEER) program of the National Cancer Institute (NCI), part of the National Institutes of Health. The data in the 18 registries represents approximately 28 percent of the U.S. population. The researchers generated estimates of hysterectomy prevalence from the Behavioral Risk Factor Surveillance System (BRFSS), a household survey conducted by the U.S. Centers for Disease Control and Prevention.

Cancer is a peer-reviewed journal of the American Cancer Society.

The research was supported by the NCI (RO1 CA123467), the Institutional Research Cancer Epidemiology Fellowship funded by the NCI (TE32 CA0009314) and the Career Development Award for Bridging Interdisciplinary Research Careers in Women’s Health (K12 HD043489-12).

About the University of Maryland School of Medicine

About the University of Marlene and Stewart Greenebaum Cancer Center