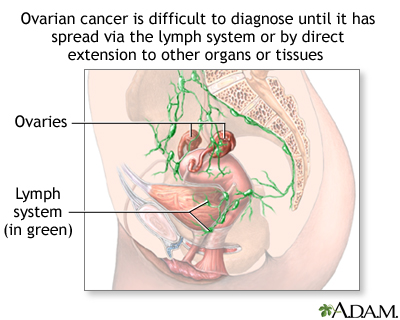 A new way of screening for ovarian cancer is showing “potential”, according to researchers in the US.

Tumours in the ovaries are hard to detect in the earliest stages meaning it can be too late to treat them effectively by the time they are found.

A trial of 4,051 women, reported in the journal Cancer, showed the method could identify those needing treatment.

But a huge study taking place in the UK will give a final verdict on the test when it is completed in 2015.

There is a survival rate of up to 90% when ovarian cancer is caught early, compared with less than 30% if it is discovered in the later stages.

Unlike other cancers, the symptoms, such as pelvic and abdominal pain or persistent bloating, are often put down to other common ailments and the tumour can be missed.

There is no mass screening programme to detect the cancer either.
Testing

Scientists already know that levels of a protein in the blood, called CA125, are often higher with ovarian cancer.

However, it is too unreliable on its own. It misses some patients and tells others they have the cancer when they are actually healthy.

Researchers are now testing the idea of using the blood test to sort patients in risk groups based on levels of CA125. Instead of going straight for surgery, low-risk patients are tested again in a year, medium-risk ones after three months and high-risk patients have an ultrasound scan to hunt for tumours.

The risks of ovarian screening tests include the following:

Finding ovarian cancer may not improve health or help a woman live longer.

Screening may not improve your health or help you live longer if you have advanced ovarian cancer or if it has already spread to other places in your body.

Some cancers never cause symptoms or become life-threatening, but if found by a screening test, the cancer may be treated. It is not known if treatment of these cancers would help you live longer than if no treatment were given, and treatments for cancer may have serious side effects.

Screening test results may appear to be normal even though ovarian cancer is present. A woman who receives a false-negative test result (one that shows there is no cancer when there really is) may delay seeking medical care even if she has symptoms.

Screening test results may appear to be abnormal even though no cancer is present. A false-positive test result (one that shows there is cancer when there really isn’t) can cause anxiety and is usually followed by more tests (such as a laparoscopy or a laparotomy to see if cancer is present), which also have risks. Complications from tests to diagnose ovarian cancer include infection, blood loss, bowel injury, and heart and blood vessel problems. An unnecessary oophorectomy (removal of one or both ovaries) may also result.

Your doctor can advise you about your risk for ovarian cancer and your need for screening tests.

The US study, at the University of Texas, followed post-menopausal women for 11 years on average.

Ten women had surgery based on their ultrasound scan and all the cancers detected were at an early stage.

Researcher Dr Karen Lu told the BBC: “Clinical practice definitely should not change from our study, but it gives us an insight - we didn’t get a lot of false positives.”

She said the UK study of 50,000 people would give definitive results: “There are two big questions - do we see cancers at an earlier stage and do we decrease the number of deaths.”

‘Possible’
Dr Sarah Blagden, from the Ovarian Cancer Action research centre, said: “Relative to the trial under way in the in the UK , this is a small study, but it does show that effective ovarian screening is possible.

“In 2015 the results of the UKCTOCs study will become available and the results are eagerly anticipated, more so now that this American study has produced such encouraging results.”

Interest in early detection as a method of reducing mortality has grown with the discovery of serum tumor markers associated with ovarian malignancies (particularly CA 125) and with improved diagnostic accuracy of pelvic ultrasonography. Intensive research is ongoing to identify additional markers and a cost-effective screening strategy. One large-scale prospective clinical screening trial found that screening did not reduce mortality from ovarian cancer but did result in harm from consequent follow-up; two other large trials are in progress to determine whether screening by blood tests and/or ultrasound reduces mortality from ovarian cancer.

There is a consensus that women at average risk for ovarian cancer should NOT undergo screening. Despite evidence to the contrary, a cross-sectional survey of physicians in the US found that one in three believed that screening for ovarian cancer was effective and commonly offered testing.

Women with a family history of ovarian cancer or familial ovarian cancer syndromes are at higher risk of the disease. Evidence suggests screening is appropriate for some of these women. Screening recommendations for higher-risk women depend on whether or not there is a known or suspected hereditary cancer syndrome.

Annwen Jones, the chief executive at Target Ovarian Cancer, said: “The results of this study are without doubt very positive, and we should take hope from that.

“Early detection of ovarian cancer will be the key to transforming survival rates. However, this study is very small, and there is no guarantee that the results will be replicated on a larger scale.”