Tweaking a protein expressed by most liver cancer cells has enabled scientists to make a vaccine that is exceedingly effective at preventing the disease in mice.

Alpha-Fetoprotein, or AFP - normally expressed during development and by liver cancer cells as well - has escaped attack in previous vaccine iterations because the body recognizes it as “self,” said Dr. Yukai He, immunologist at the Medical College of Georgia and Georgia Regents University Cancer Center.

Liver cancer is among the fastest-growing and deadliest cancers in the United States with a 17 percent three-year survival rate. Vaccines help direct the immune system to attack invaders by showing it a representative substance, called an antigen, that the body will recognize as foreign, in this case, AFP for liver cancer.

In a process called antigen engineering, He tweaked AFP just enough to get the immune system to recognize it but still keep the AFP expressed by liver cancer cells in the bull’s eye, he and his colleagues report in the journal Hepatology.

AFP is expressed by about 80 percent of most common liver cancer cells but not typically by healthy adults. For cancer to flourish, cells must revert to an immature state, called dedifferentiation, which is why liver cancer cells express a protein during development and why the immune system can recognize AFP as “self.”

He’s modified AFP was delivered in a vehicle with a proven record for getting into cells. The lentivector is the backbone of the human immunodeficiency virus, or HIV, minus most of its genes. It is particularly good at targeting dendritic cells, whose job is to show the immune system antigens then activate T cells to attack.

Dr. Yukai He, a Georgia Research Alliance Distinguished Vaccine Investigator at the cancer center, has a $1.6 million grant from the National Cancer Institute to further refine his vaccine approach against hepatocellular carcinoma, which the American Cancer Society said accounts for 80 percent of liver cancers.

Those kinds of cancers are a particular problem as liver cancer rates have tripled during the past 30 years, he said.

“It’s really dramatic,” He said. “There is no cancer that has increased so dramatically this way.”

While some of it is likely due to increasing rates of Hepatitis C and Hepatitis B infections, rising rates of obesity and diabetes are likely to blame for 60 percent of the increase, he said. It’s not clear exactly how those diseases cause liver cancer but it could be that they induce chronic inflammation and damage in the liver, similar to what the viruses inflict, that cause cell mutations that lead to cancer, He said.

In a proven model where mice are exposed to chemicals known to induce liver cancer, the vaccine blocked cancer about 90 percent of the time. Mice receiving the vaccine had more T cells generally and more that targeted AFP, which could keep an eye out for re-emerging liver cancer.

Recurring tumor cells is an unfortunately realistic scenario for liver cancer patients, who have a 70 percent recurrence rate in five years, He said. Patients typically have surgery to remove the diseased portion of the liver, but there are currently no effective adjuvant therapies, such as chemotherapy, to reduce recurrence, He said.

Ideally, some version of his vaccine will one day provide that key missing piece and dramatically improve patient survival, He said. Similarly, the approach might also work to prevent the disease in high-risk populations. He has not yet looked at whether the vaccine could be a first-line treatment.

He recently received a $1.6 million grant from the National Cancer Institute that will continue to move the mouse studies toward human application. “Now that we know it works in mice, we have to make sure it works in people,” He said, noting that many promising cancer vaccines have not worked well in humans.

The new studies include taking the blood of healthy individuals and removing monocytes, which are plentiful white blood cells that can become dendritic cells. They’ll coax dendritic cells to develop, give them the vaccine, then give the armed dendritic cells back to mice to see if they will produce AFP-focused T cells.

Liver cancer is preventable if the primary risk factors such as chronic hepatitis B and C infections can be eliminated. The number of cases of liver cancer is expected to grow dramatically over the next 20 years if prevention strategies are not promoted.
The Hepatitis B Vaccine: World’s First Anti-Cancer Vaccine

Next steps also include developing a virus-like particle, which retains the efficiency of lentivector without the safety concerns of the HIV-derived delivery system and can be easily reproduced in a factory. These protein-based delivery systems are utilized by a number of vaccines already used in humans. He and his team also are working on a receptor ligand that would cause AFP to draw even more attention from dendritic cells. 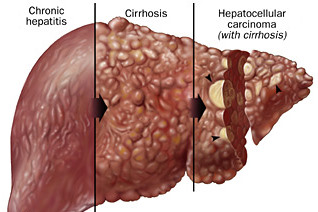 He is betting that a safer delivery vehicle and ligand packaged with his antigen in a so-called “tripartite” vaccine will be a powerful package.

Carcinogen- and hepatitis B-induced liver cancer models are being used for the studies.

While hepatitis vaccines have reduced liver cancer rates in most other countries, unprecedented rates of obesity and diabetes are accelerating rates in this country, He said. Much like chronic hepatitis infections and carcinogens, diabetes and obesity both produce chronic inflammation, a major risk for liver cancer. Both conditions also dramatically increase the workload of the large organ, which has a big role in metabolism, by generating more fat and glucose that needs handling.

The U.S. Food and Drug Administration has approved two vaccines classified as cancer preventers: the hepatitis B virus vaccine and vaccines against human papillomavirus types 16 and 18 that cause most cervical cancer. A variety of cancer treatment vaccines, such as the one He is working on, are under development. The FDA has approved one cancer treatment vaccine for some cases of metastatic prostate cancer, according to the NCI.