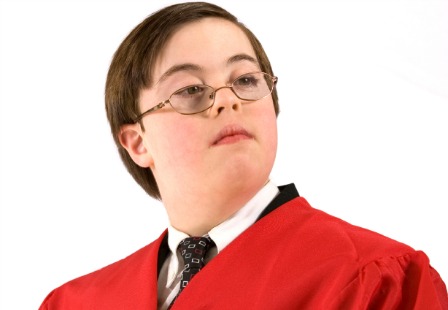 Although doctors have long known that people with Down syndrome have a heightened risk of developing acute lymphoblastic leukemia (ALL) during childhood, they haven’t been able to explain why. Now, a team of Dana-Farber Cancer Institute investigators has uncovered a connection between the two conditions.

In a study posted online today by the journal Nature Genetics, the researchers track the genetic chain of events that links a chromosomal abnormality in Down syndrome to the cellular havoc that occurs in ALL. Their findings are relevant not only to people with Down syndrome but also to many others who develop ALL.

“For 80 years, it hasn’t been clear why children with Down syndrome face a sharply elevated risk of ALL,” said the study’s lead author, Andrew Lane, MD, PhD, of Dana-Farber’s Division of Hematologic Neoplasia. “Advances in technology - which make it possible to study blood cells and leukemias that model Down syndrome in the laboratory - have enabled us to make that link.”

People with Down syndrome have an increased risk for a variety of health problems, including heart defects, respiratory and hearing difficulties, and thyroid conditions. Their risk for childhood ALL is 20 times that of the general population.

The syndrome occurs in people who have an extra copy of a single chromosome, known as chromosome 21. The addition may involve the entire chromosome or a portion of it.

To trace the link between Down syndrome and ALL - specifically, the most common form of the disease known as B cell ALL, or B-ALL - Lane, who is also a medical oncologist in the Dana-Farber/Brigham and Women’s Cancer Center Adult Stem Cell Transplantation Program, and his colleagues acquired a strain of mice that carry an extra copy of 31 genes found on chromosome 21 in humans.

Down syndrome and leukemia" align="right" /> “B-ALL occurs when the body produces too many immature B cells, which are a type of white blood cell that normally fights infections,” Lane explained. “When we tested the mice’s B cells in the laboratory, we found they were abnormal and grew uncontrollably - just as B cells from B-ALL patients do.”

The researchers then scanned the mice’s B cells to ascertain their “molecular signature” - the pattern of gene activity that distinguished them from normal B cells in mice. The chief difference was that in the abnormal cells, the group of proteins called PRC2 was not functioning. Somehow, the loss of PRC2 was spurring the B cells to divide and proliferate before they were fully mature.

To confirm that a shutdown of PRC2 is critical to the formation of B-ALL in people with Down syndrome, Lane’s team focused on the genes controlled by PRC2. Using two sets of B-ALL cell samples - one from patients with Down syndrome, the other from patients without the syndrome - they measured the activity of thousands of different genes, looking for differences between the two sets. About 100 genes turned out to be much more active in the Down syndrome group, and all of them were under control of PRC2. When PRC2 is silenced - as it is in the B cells of Down syndrome patients - those 100 genes respond with a burst of activity, driving cell growth and division.

The question then was, what gene or group of genes was stifling PRC2 in Down syndrome patients’ B cells? Using cells from the mice with an extra copy of 31 genes, the investigators systematically switched off each of those genes to see its effect on the cells. When they turned off the gene HMGN1, the cells stopped growing and died.

“We concluded that the extra copy of HMGN1 is important for turning off PRC2, and that, in turn, increases the cell proliferation,” Lane remarked. “This provides the long-sought after molecular link between Down syndrome and the development of B cell ALL.”

Although there are currently no drugs that target HMGN1, which could potentially short-circuit the leukemia process in people with Down syndrome, the researchers suggest that drugs that switch on PRC2 could have an anti-leukemic effect in some of those people. Work is under way to improve these drugs, known as histone demethylase inhibitors, so they can be tested in cell samples and animal models.

As other forms of B-ALL also have the same 100-gene signature as the one discovered for B-ALL associated with Down syndrome, drug agents that target PRC2 might be effective in those cancers as well, Lane added.