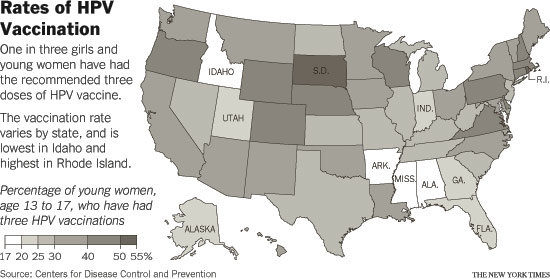 The risk of developing cervical cancer can be significantly decreased through human papillomavirus (HPV) vaccination.  Despite calls from leading health and professional organizations for universal vaccination for girls ages 11 and 12, the most recently published national data indicate that only 14.5 percent of 11- and 12-year-old girls have received at least one dose of the HPV vaccine and 3 percent have completed the three-dose series. A new Moffitt Cancer Center study provides insight into physician recommendations, one important factor that may contribute to these low levels of uptake.

Moffitt’s research team found only a “modest increase” in physicians who consistently recommended the vaccine to early adolescent girls and no significant increase in recommendations for slightly older girls in so-called “catch-up groups” between the ages of 13 and 26. The goal of universal HPV vaccination is to lower the risk of developing cervical cancer later in life by vaccinating the target age group prior to their first sexual experience. While not all types of HPV cause cancer, high-risk types are the culprit for virtually all cervical cancers. HPV vaccination protects against the two types of HPV that cause about 70 percent of cervical cancers.

“This study demonstrates that the change in consistent HPV vaccine recommendations to early adolescent females was modest, and for older adolescent females was virtually nonexistent, from three to five years after the vaccine became available,” explained Susan T. Vadaparampil, Ph.D., M.P.H., associate member of the Health Outcomes and Behavior Program at Moffitt. “Physician recommendation is central to increasing HPV vaccination rates because it is one of the most important predictors of whether a patient gets the HPV vaccine.”

The researchers’ conclusion was based on surveys sent in 2009 and 2011 to a national randomly selected sample of physicians, asking how often they recommended the HPV vaccine.

“By increasing these recommendations, more patients will most likely get vaccinated, which in turn will prevent most cervical cancers, and possibly other HPV-related cancers,” said Teri L. Malo, Ph.D., M.P.H., a research scientist at Moffitt.

The study appears in the January issue of the American Journal of Preventive Medicine. The research was supported by a grant from the National Institutes of Health (R01AI076440-01).

About Moffitt Cancer Center
Located in Tampa, Moffitt is one of only 41 National Cancer Institute-designated Comprehensive Cancer Centers, a distinction that recognizes Moffitt’s excellence in research, its contributions to clinical trials, prevention and cancer control. Since 1999, Moffitt has been listed in U.S. News & World Report as one of “America’s Best Hospitals” for cancer. With more than 4,200 employees, Moffitt has an economic impact on the state of nearly $2 billion.