The first Phase II study to investigate the use of the anti-cancer drug, everolimus, for the initial treatment of advanced papillary kidney cancer has shown that it is successful in slowing or preventing the spread of the disease, according to research to be presented today (Sunday) at the 2013 European Cancer Congress (ECC2013) [1].

Dr Bernard Escudier, Head of the French Group of Immunotherapy and chairman of the Genitourinary tumour board at the Institut Gustave Roussy in Villejuif, France will say: “Our results showed that for 59% of patients who received everolimus as their first-line treatment, their disease did not get worse and remained stable. These findings are important and indicate that more than half of these cancer patients are getting some kind of benefit from everolimus treatment.

“Advanced papillary kidney cancer is a very difficult cancer to treat, and because there is no standard of care, there is disagreement amongst experts regarding the best treatment option for these patients. Our clinical findings are encouraging and suggest that everolimus may represent a new treatment option.”

Papillary kidney cancer is the second most frequent type of kidney cancer and accounts for approximately 15% of all kidney cancer cases; it is five times more common in men than in women. When the cancer is confined to one location, surgical removal is usually associated with an excellent prognosis. However, when it spreads to other parts of the body, therapies are ineffective. There are two types of papillary cancer, based on cell appearance (histology), known as type I and type II. Type I are more common and grow slowly, whereas type II papillary kidney cancers are much more aggressive and have a poor prognosis.

Everolimus is an anti-cancer drug known as an mTOR inhibitor; mTOR stands for “mammalian target of rapamycin” and it is a protein that regulates vital cell growth processes, including cell metabolism, growth and proliferation. Its failure to function correctly is involved in the development of several cancers. [2]

Dr Escudier and his colleagues in France, Germany, Italy, Spain, Poland and the UK recruited 92 patients into the RAPTOR (RAD001 in Advanced Papillary Tumor Program in Europe) study, which started in July 2009. The patients, who had never received systemic treatment, were instructed to take the drug orally, once a day, at a dose of 10 mg for as long as they could tolerate it.

Papillary renal cell carcinomas are generally considered a less aggressive type of kidney cancer.  These tumors are often diagnosed at the time of autopsy when the patient has died of another cause.  In general, these tumors are usually well encapsulated, grow slowly, and have an overall lower malignant potential.

Of the 92 enrolled patients, 83 were included in the intention-to-treat (ITT) analysis and 63 were included in the per-protocol (PP) analysis. An ITT analysis examines the study results based on the treatment to which a group of patients is assigned, rather than the treatment received, and reflects real clinical practice. The PP analysis determines the real biological effect of the new drug as it only includes patients who were compliant with the treatment to which they were assigned, and who also adhered to the clinical study instructions. All of the 92 enrolled patients were included in the safety analysis of the data. Tissue samples were analysed by pathologists in the local hospitals to check whether or not the cancer had spread, and the samples were also checked centrally by an independent, expert group of pathologists.

According to the PP analysis carried out by the local investigators, disease was stable and had not progressed after six months in 59% of patients, while the central review confirmed this in 35% of patients. The local investigators found that the time that elapsed before the cancer spread or worsened (progression-free survival) was 7.8 months, while the central pathology review found it was 3.9 months. At least half of the patients were alive at 20 months.

Dr Escudier will say: “Similar results were seen in the ITT analysis and strongly confirm the overall study findings. According to assessments by the local investigators, progression-free survival was 7.6 months, according to the central review it was 3.7 months, and more than half of the patients were alive at 21 months.

The American Cancer Society estimates that more than 58,240 people were diagnosed with kidney cancer in 2010. In the 1980s, up to 80% of kidney cancers were in advanced stages when they were diagnosed. Today, thanks to more advanced detection methods, only about 40% of cases are advanced at diagnosis.

You have two kidneys, one on each side of the back above the waist. Kidneys filter blood, and the waste is carried in the urine, which is produced by microscopic tubules. Urine flows into the ureter tubes and down into the bladder. Cancer arises from the microscopic tubules inside the kidney. Although kidney cancer usually grows as a single mass within the kidney, a kidney may contain more than one tumor, or tumors may be found in both kidneys.

Renal cell carcinoma (cancer) (RCC) is the most prevalent form of kidney cancer. Types of RCC include clear cell, papillary, chromophobe and collecting duct carcinomas. Clear cell carcinoma accounts for 80% of all RCC cases, and most treatments are focused on this type.

Urothelial cancer of the kidney pelvis and ureter: Cancer of the urinary tract that occurs in the kidney or ureter is called urothelial carcinoma. It is not considered kidney cancer, although it is frequently called that in error.

“These results underline the differences that are often observed between local investigator assessment and central review according to the established set of rules used to evaluate anti-cancer drugs. 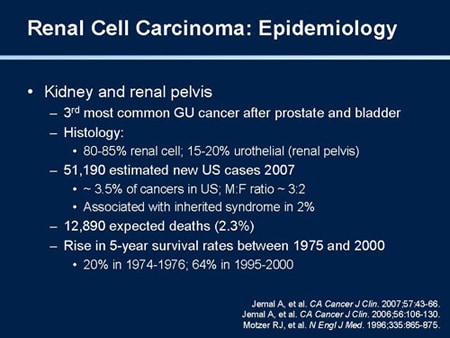 “As far as we know, this study is unique as it was the first study of an mTOR inhibitor to only include patients with advanced papillary kidney cancer and diagnosis was also confirmed by an independent group of pathologists experienced in the classification of kidney cancer to prevent any tumours being classified incorrectly.

“Everolimus represents another interesting treatment option for advanced papillary kidney cancer patients as it seems to extend their survival and time without the disease progressing.”

Adverse side-effects were generally well tolerated. They included weakness, tiredness and anaemia; 27% of patients discontinued everolimus due to these side-effects. “The typical patient being treated for advanced papillary kidney cancer is middle-aged, active and still working, and the impact of side-effects may be more important to them,” he will say.

Cancer Research UK scientists are looking at the von Hippell Lindau gene (vHL) to try to find out more about the process that leads to kidney cancer developing. Particular faults in the gene lead to very specific things happening in kidney cells. The scientists are looking for these gene faults and finding out what they do. We hope that this work will lead to new treatments that block kidney cancer growth. Recent research found that that mutations in a gene called PBRM1 are present in up to a quarter of patients with renal cell carcinomas, the type that accounts for 90% of kidney cancers. This finding might help researchers to develop tests and treatment in the future.

Cancer Research UK is also supporting a trial looking into the genetic causes of kidney cancer. This trial is looking at people who may have an inherited genetic fault or a medical condition that increases their risk of getting kidney cancer.

The GPKC study is looking at the genetics of a type of kidney cancer called papillary renal cell cancer. The researchers are looking at blood and tumour samples from people who have been diagnosed with this type of cancer.

“While the results from this Phase II study are encouraging, a Phase III trial would need to be done to fully characterise the efficacy and safety profile of everolimus in this patient population,” he will conclude.

President of ECCO, Professor Cornelis van de Velde, commented: “Papillary tumours have been excluded from many of the targeted therapy trials. This study on targeting the mTOR pathway in patients with advanced papillary kidney cancer provides a basis for a Phase III trial and is potentially practice changing. It also emphasises the need for expert pathology, since central review gave markedly different results than local review.”

ESMO spokesperson, Professor Manuela Schmidinger, Professor of Medicine in the Department of Oncology at the University of Vienna, Austria, commented: “Treatment strategies for metastatic renal cell cancer (RCC) have dramatically improved within the last few years. However, these achievements have been mostly restricted to patients with clear-cell (cc)-RCC. Patients with non-cc-RCC are usually underrepresented in clinical trials, thus the benefits of novel targeted agents remains unclear in this population. So far, attempts to investigate the impact of new drugs in the non-cc-RCC-population have resulted in inconsistent but mostly modest results. This is also due to the fact that studies included different types of non-cc-RCCs; however, these are tumours of different epithelial origin, with different genetic background and different clinical behaviour. RAPTOR is the first prospective study that investigated the impact of a targeted agent, everolimus, in patients with papillary RCC. In this study, Escudier et al demonstrated that everolimus provides a promising median average overall survival in this patient setting. A strength of this trial in contrast to other non-cc-RCC -studies is that only patients with papillary subtypes I and II were included, rather than all different types of non-cc-RCC.”

[2] Everolimus is also called RAD-001, and by its brand names Afinitor, and Afinitor Disperz.

[3] The work was funded by Novartis Pharmaceuticals.