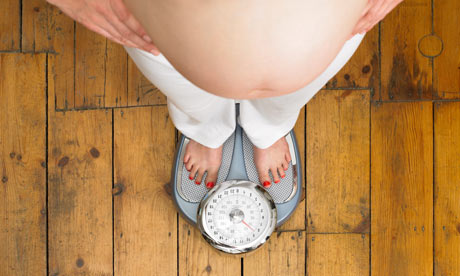 Two studies from the Perelman School of Medicine at the University of Pennsylvania reveal new information about the effects of weight gain and obesity among pregnant women. One study, examining weight gain during pregnancy, shows that despite updated guidelines from the Institute of Medicine (2009), the majority of patients are still unaware of the appropriate amount of weight they should gain. A second study evaluating the implications of prenatal tests on morbidly obese women, reveals the importance of testing for this group of patients who are at an increased risk of stillbirth and early delivery. These studies, available online now in the journal Obstetrics & Gynecology, will be presented at the American College of Obstetrics & Gynecology’s Annual Clinical Meeting at Chicago’s McCormick Place from April 26 to April 30, 2014.

Patient Perceptions of Weight Gain During Pregnancy
The prevalence of obesity among women is increasing, and previous research has shown that excess weight gain during pregnancy is associated with an increased risk of complications for both mother and baby. In the new study, which aimed to examine the associations between pre-pregnancy body mass index (BMI) and gestational weight gain, seventy-one percent of women who received care at a resident-run clinic, did not know the appropriate gestational weight gain, and 63 percent said that their healthcare provider had not spoken to them about the issue. Additional results of the study, led by Penn Medicine researchers Nyima Ali, MD, and Charmaine Wright, MD, revealed that women with a higher pre-pregnancy BMI were more likely to overestimate the appropriate weight gain during pregnancy.

“We know that excess weight gain in pregnancy can lead to an increased risk of complication both for the mother and baby, so it’s important that information about appropriate weight gain be properly communicated to patients,” said Ali. “Our results highlight the importance of education both for patients and care providers in order to bridge the gap between physician knowledge of maternal obesity and patient understanding.”

Dr. Ali will present “Understanding Patient Perceptions of Communication about Gestational Weight Gain” on Tuesday, April 29, 2014 from 3:45 p.m. to 4:45 p.m. in the Exhibit Hall.

Morbid obesity in pregnant women has been shown to increase the risk of infection, cesarean delivery, and stillbirth. As a result of these increased risks, prenatal testing is used to assess fetal wellbeing in this patient population. However, authors of a second study being presented at ACOG’s annual meeting, note that data evaluating the effects of prenatal testing are limited. The new study, led by P. Kaitlyn Edelson, MD, aimed to evaluate the risk of induces labor and complications resulting from prenatal testing in this group of women. Results show that not only did morbidly obese women not have an increased risk of labor induction, but there was also no increased risk of early delivery in this group. The authors suggest the results have strong implications for the direction of future research.

“Although it remains unknown whether testing decreases the stillbirth risk in morbidly obese women, results of our study indicate that prenatal testing does not increase the risk of morbidity for these patients,” said Edelson. “Future studies should shift the focus to examine how prenatal testing effects the babies born to this group of patients.”

The prevalence of obesity among women of reproductive age is increasing. Excess gestational weight gain is associated with increased short- and long-term maternal and neonatal morbidity and mortality. We sought to examine associations between pre-pregnancy body mass index (BMI) and self-suggested gestational weight gain and to identify barriers to achieving an appropriate weight gain in an inner-city population receiving care at a resident-run clinic.

Dr. Edelson will present “Does Antenatal Testing for Morbid Obesity Affect Induction Rate or Timing of Delivery” on Monday, April 28, 2014 from 3:45 p.m. to 4:45 p.m. in the Exhibit Hall. Additional Penn authors on the study include Jamie A. Bastek MD, MSCE, and Lisa D. Levine MD, MSCE.

Penn Medicine is one of the world’s leading academic medical centers, dedicated to the related missions of medical education, biomedical research, and excellence in patient care. Penn Medicine consists of the Raymond and Ruth Perelman School of Medicine at the University of Pennsylvania (founded in 1765 as the nation’s first medical school) and the University of Pennsylvania Health System, which together form a $4.3 billion enterprise.

The Perelman School of Medicine has been ranked among the top five medical schools in the United States for the past 17 years, according to U.S. News & World Report’s survey of research-oriented medical schools. The School is consistently among the nation’s top recipients of funding from the National Institutes of Health, with $392 million awarded in the 2013 fiscal year.

Penn Medicine is committed to improving lives and health through a variety of community-based programs and activities. In fiscal year 2013, Penn Medicine provided $814 million to benefit our community.