Lichen Sclerosus
The true frequency of pediatric lichen sclerosus (LSV) is difficult to assess. The average age of onset is about 6 years and the age at diagnosis is around 10 years. The most common symptom is vulvar pruritus; bleeding also occurs very frequently although this sign is not common in adults. LSV is asymptomatic in 10% of cases. Other main complaints are hemorrhagic blisters, fissuring, burning, and constipation. The classical clinical presentation of LSV is an erythema with confluent flat-topped white or ivory-colored papules, usually symmetric and described as ‘keyhole’, ‘hourglass’ or ‘figure eight’ configurations (fig. 6). The main clinical aspects are fissures, hemorrhages and excoriations, especially on the labia minora and clitoris. Unusual features can be local depigmentation or a vitiligo-like aspect. LSV can be asymptomatic, presenting only because of an abnormal appearance. The hymen is not involved, but the lesions extend sometimes to the perianal region. LSV may be misdiagnosed as sexual abuse so the diagnosis must be made cautiously because of the great deal of anxiety it may induce.

The evolution of LSV seems to be resolution over time but not under the influence of hormonal factors such as menarche. The pathogenesis is unclear: hormonal factors; interaction with cytokines and growth factors, with fibroblasts leading to local changes in collagen; enzyme deficiency; autoimmune disorders; genetic factors; associations with the antigens of the HLA system, infectious agents (virus, mycobacteria, spirochete, especially Borrelia), and mechanical factors (friction, Köbner phenomenon) have all been suggested.

The etiology is probably multifactorial and appears to include a genetic predisposition, environmental factors and local factors. 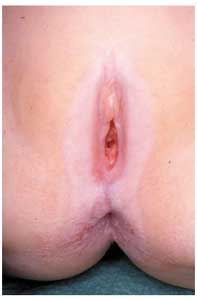 Topical corticosteroid ointments and emollients, as well as proper perineal hygiene, cotton underwear, and avoidance of trauma and tight clothes are very effective for LSV lesions and reduce the pruritus. The treatment of reference is ultrapotent topical steroids. No severe adverse effects (atrophy, infection, depigmentation, systemic passage) have been observed, except for telangiectasia and striae. Ultrapotent topical steroid is a safe and effective treatment in children, as in adults, and results in fast improvement. This treatment can be prescribed once a day for 2 months and then switched to intermittent use of lower potency topical steroids or occasional use of ultrapotent steroids for maintenance treatment.

With early aggressive treatment, long-term sequelae may be prevented. A significant proportion of children have long-term symptoms and atrophic sequelae.

Lifelong follow-up is thus recommended, once or twice every year, even after the menarche, according to the type of LSV and the patient’s compliance.