Current recommendations are for all women who go into labor prior to 34 weeks gestation to be given antenatal corticosteroids (betamethasone) to help mature the baby’s lungs. However, many babies born in the late preterm period - between 34 and 36 weeks gestation - require respiratory support at birth. A recently completed study asked the question, “Would neonates born at these later gestational ages also benefit from antenatal corticosteroids?”

The answer is “yes” and is detailed in “Antenatal Betamethasone for Women at Risk for Late Preterm Delivery,” a study from the Eunice Kennedy Shriver National Institute of Child and Human Development Maternal Fetal Medicine Units Network (MFMU) with co-sponsorship from the National Heart, Lung and Blood Institute. The research was recently published in the New England Journal of Medicine.

Dwight Rouse, MD, of the Division of Maternal-Fetal Medicine at Women & Infants Hospital of Rhode Island, a Care New England hospital, a professor of obstetrics and gynecology at The Warren Alpert Medical School of Brown University, and the Brown/Women & Infants principal investigator for the MFMU, said, “For many years, obstetric and pediatric providers have known that steroids administered in preterm labor help speed the development of the preterm baby’s lungs at 34 weeks gestation or earlier. This new research has shown that these same steroids when given to women who are at risk for late preterm delivery can significantly reduce the rate of neonatal respiratory complications.”

The multicenter, randomized trial involved approximately 2,800 women who were pregnant with one baby at 34 weeks to 36 weeks five days gestation and at high risk for late preterm delivery. The participants were randomly assigned to either receive two injections of betamethasone or placebo 24 hours apart. Researchers then looked at whether the infants needed respiratory treatment during the first 72 hours after delivery. 14.4 percent of babies in the placebo group required respiratory treatment as compared to 11.6 percent of the babies in the betamethasone group. Further, severe respiratory complications, including prolonged oxygen supplementation, surfactant use, mechanical ventilation, and a form of chronic lung disease in newborns called bronchopulmonary dysplasia also occurred significantly less frequently in the betamethasone group. 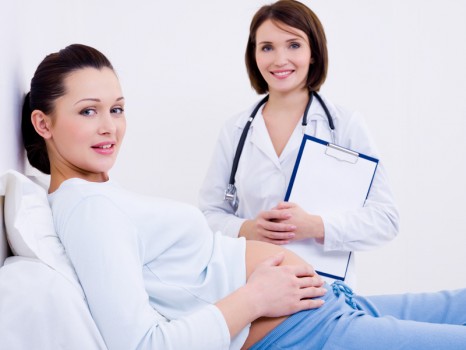 “This research supports the use of known medications that will allow us to help even more babies get the healthiest start at life,” explained Dr. Rouse. “I am proud of our hardworking MFMU Network research team for their dedication to this project. I am also very grateful for the contribution of Women & Infants’ obstetricians and midwives, who gave their ongoing support to this study and encouraged their patients - to whom I am also profoundly grateful - to participate. As a result, Women & Infants contributed more than ten percent of the patients enrolled in this large trial, more than any other participating hospital.”

Women & Infants Hospital of Rhode Island, a Care New England hospital, is one of the nation’s leading specialty hospitals for women and newborns. A major teaching affiliate of The Warren Alpert Medical School of Brown University for obstetrics, gynecology and newborn pediatrics, as well as a number of specialized programs in women’s medicine, Women & Infants is the 12th largest stand-alone obstetrical service in the country and the largest in New England with approximately 8,500 deliveries per year. A Designated Baby-Friendly® USA hospital, U.S.News & World Report 2014-15 Best Children’s Hospital in Neonatology and a 2014 Leapfrog Top Hospital, in 2009 Women & Infants opened what was at the time the country’s largest, single-family room neonatal intensive care unit.