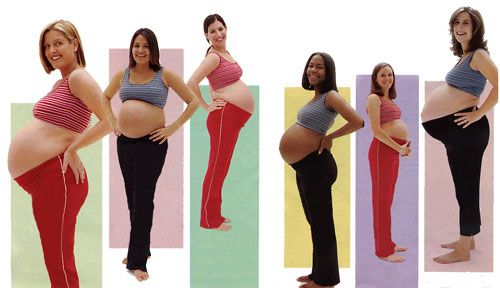 Unhealthy weight gain in pregnancy has been linked with infant size and body composition but until now little was known about its long-term association with childhood obesity among low-income and multi-ethnic youth. For the first time, researchers at Columbia University’s Mailman School of Public Health studied the effects of gestational weight gain on childhood obesity risk among a multi-ethnic urban population. The researchers determined that excessive pregnancy weight gain was associated with greater overall and abdominal body fat in children and obesity at age seven. Excessive pre-pregnancy weight gain was associated with an increased risk of childhood obesity of approximately 300 percent. Findings are published online in the journal Maternal & Child Nutrition.

Before pregnancy for this population of African-American and Dominican women, 45 percent were overweight or obese, and 64 percent of mothers gained more weight during pregnancy than recommended by the 2009 Institute of Medicine Guidelines. At age seven, 22 percent of the children born to the women studied were obese, and on average, 24 percent of their body mass was comprised of fat tissue. The 2009 Institute of Medicine Guidelines for weight gain during pregnancy were set to optimize prenatal, birth, and possibly longer-term health outcomes, and recommended that pregnant women gain weight within set ranges according to their pre-pregnancy body mass index. For example, it recommends that women in a normal weight range gain 25-35 lbs and approximately 1 lb per week in the 2nd and 3rd trimester. These guidelines should be used in conjunction with clinical judgment by healthcare providers.

“This is the first study to evaluate the long-term effects of gestational weight gain in a contemporary low-income multi-ethnic urban population, characterized by a high risk of obesity,” noted Elizabeth Widen, PhD, RD, postdoctoral fellow at the Mailman School Department of Epidemiology, the Institute of Human Nutrition, and the New York Obesity Research Center.

Findings were based on data from the Columbia Center for Children’s Environmental Health Mothers and Newborns Study in Northern Manhattan and the South Bronx from 1998 to 2013. There were 727 mothers who self-identified as African-American or Dominican.

Gain Weight Safely During Your Pregnancy

Eating a healthy, balanced diet will help your baby get the nutrients he or she needs and grow at a healthy rate. But how many extra calories do you really need?

Though you do need some extra calories, it’s not necessary to ‘‘eat for two.’’ The average pregnant woman needs only about 300 healthy calories more a day than she did before she was pregnant. This will help her gain the right amount of weight during pregnancy.

In general, you should gain about 2 to 4 pounds during the first three months you’re pregnant and 1 pound a week during the rest of your pregnancy. If you are expecting twins you should gain 35 to 45 pounds during your pregnancy. This would be an average of 1 ½ pounds per week after the usual weight gain in the first three months.

It’s especially important to gain the right amount of weight when you’re expecting twins because your weight affects the babies’ weight. And because twins are often born before the due date, a higher birth weight is important for their health. When carrying twins, you may need between 3,000 and 3,500 calories a day.

“Our findings suggest that weight gain in pregnancy above the Institute’s recommendations is strongly associated with obesity in childhood,” said Andrew Rundle, DrPH, associate professor of Epidemiology. “A stronger focus on helping pregnant women meet the Institute of Medicine’s targets for healthy weight gain during pregnancy is needed.”

The researchers controlled for pre-pregnancy body mass index, maternal education, receipt of public assistance, ability to afford food in pregnancy, and previous pregnancies. Women were also excluded from the analysis if the first prenatal visit was after 20 weeks gestation or if the mother self-reported diabetes, hypertension, known human immunodeficiency virus status, or use of illicit drugs or cigarettes during pregnancy. Marital status and infant sex had no effect on outcomes.

What is weight gain during pregnancy?

If your weight is in the “normal” range (a body mass index of 18 to 25) before you conceive, The American College of Obstetricians and Gynecologists (ACOG) recommends a gain of 25 to 35 pounds throughout pregnancy. Shoot to add three to five pounds during the first trimester and one to two pounds each week after. According to the ACOG, if you’re underweight at conception, you should gain 28 to 40 pounds. If you’re overweight, try to keep it to 15 to 25 pounds. No matter what your starting weight, your goal is to keep the gain as steady as possible. Baby needs a daily supply of nutrients, and those come from the foods you eat.

What could be causing my weight gain during pregnancy?

Weight gain is, of course, normal - and healthy - throughout pregnancy. But gaining weight suddenly or excessively could be a sign of preeclampsia, a serious pregnancy condition.

When should I go to the doctor with my weight gain during pregnancy?

Don’t worry if your weight gain fluctuates a bit from week to week, but contact your doctor if you suddenly gain or lose weight, especially in the third trimester.

“Some weight gain during pregnancy is normal, but women need to know that gaining too much weight can put their child at risk for being obese in childhood and as they get older, which places them at higher risk for future chronic disease. Because pregnancy weight gain has lasting implications for childhood health, we need to determine how to support women to gain a healthy amount of weight in pregnancy,” said Widen.

Founded in 1922, Columbia University’s Mailman School of Public Health pursues an agenda of research, education, and service to address the critical and complex public health issues affecting New Yorkers, the nation and the world. The Mailman School is the third largest recipient of NIH grants among schools of public health. Its over 450 multi-disciplinary faculty members work in more than 100 countries around the world, addressing such issues as preventing infectious and chronic diseases, environmental health, maternal and child health, health policy, climate change & health, and public health preparedness. It is a leader in public health education with over 1,300 graduate students from more than 40 nations pursuing a variety of master’s and doctoral degree programs. The Mailman School is also home to numerous world-renowned research centers including ICAP (formerly the International Center for AIDS Care and Treatment Programs) and the Center for Infection and Immunity.