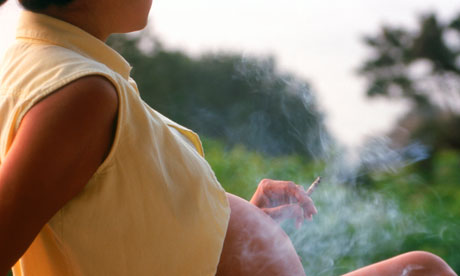 A new study provides a possible explanation of reports that mothers of twins are more likely to have smoked, despite evidence that nicotine reduces fertility.

Nicotine has an effect on hormone production, and while smoking may have deleterious effects on fertility, the study found that it may raise the likelihood of producing twins in women with certain genetic backgrounds. The researchers discovered significant interactions between smoking and variants in several genes, especially one in the TP53 gene.

“Although we demonstrated that there are significant differences in gene variant frequencies in mothers of twins compared with mothers of singletons, the most important difference between groups of mothers in our study is whether or not the mothers smoked,” said Dr. Lorena Madrigal, senior author of the American Journal of Human Biology study.

“We propose that smoking and a variant of TP53 work together to disrupt the normal balance that leads to the gestation of a single infant, making having twins more likely in women who smoke and who have this particular TP53 variant.”

Why is it so dangerous to smoke during pregnancy?

Cigarette smoke contains more than 4,000 chemicals, including truly nasty things like cyanide, lead, and at least 60 cancer-causing compounds. When you smoke during pregnancy, that toxic brew gets into your bloodstream, your baby’s only source of oxygen and nutrients.

While none of those 4,000-plus chemicals is good for your baby (you would never add a dollop of lead and cyanide to his strained peaches), two compounds are especially harmful: nicotine and carbon monoxide. These two toxins account for almost every smoking-related complication in pregnancy, says ob-gyn James Christmas, director of Maternal Fetal Medicine for Commonwealth Perinatal Associates at Henrico Doctors’ Hospital in Richmond, Virginia.

The most serious complications -  including stillbirth, premature delivery, and low birth weight -  can be chalked up to the fact that nicotine and carbon monoxide work together to reduce your baby’s supply of oxygen. Nicotine chokes off oxygen by narrowing blood vessels throughout your body, including the ones in the umbilical cord. It’s a little like forcing your baby to breathe through a narrow straw. To make matters worse, the red blood cells that carry oxygen start to pick up molecules of carbon monoxide instead. Suddenly, that narrow straw doesn’t even hold as much oxygen as it should.

What is secondhand smoke?

Secondhand smoke is smoke you breathe in from someone else’s cigarette, cigar or pipe. Being exposed to secondhand smoke during pregnancy can cause a baby to be born with low birthweight.

-  Are more likely to die from sudden infant death syndrome (also called SIDS). This is the unexplained death of a baby younger than 1 year old.
-  Are at greater risk for asthma, bronchitis, pneumonia, ear infections, respiratory symptoms
-  May experience slow lung growth

What is thirdhand smoke?

Thirdhand smoke is what’s left behind from tobacco and tobacco smoke. It can include lead, arsenic and carbon monoxide. It’s what you smell on things like clothes, furniture, carpet, walls and hair that’s been in or around smoke. It’s why you often can tell that someone smokes by the smell of his clothes, home or car. Thirdhand smoke is why opening a window or smoking in another room isn’t enough to protect others smoking.

If you’re pregnant or a new mom, stay away from thirdhand smoke. Babies who breathe in thirdhand smoke may have serious health problems, like asthma and other breathing problems, learning disorders and cancer.