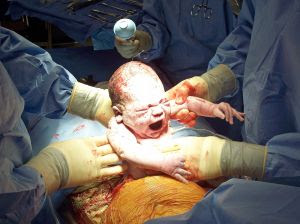 While doctors and health officials battle rising cesarean section rates, a fresh look at past research suggests that induction of labor may not be contributing to the problem.

It has been thought that inducing labor in a woman whose pregnancy has lasted too long, but whose water hasn’t broken, could result in the need for a C-section.

But in a review of 37 studies on labor induction, researchers found that it actually decreased the risk of having a C-section.

“It’s quite remarkable that the studies do show a slight reduction of C-sections,” said Dr. Stephen Wood, the report’s lead author from the University of Calgary in Canada.

Previous studies have linked inducing labor with an increased risk of women having C-sections, which led to the belief that reducing inductions would also reduce the number of cesarean procedures.

That research, however, is mostly based on studies that didn’t account for other complications that might increase the women’s risk for C-sections.

Currently, about 32 percent of U.S. births are by C-section, according to the Centers for Disease Control and Prevention.

The procedure increases the chance of bowel or bladder injuries for women and puts babies at risk of breathing problems.

For the new study, Wood and his colleagues reviewed clinical trials that randomly assigned women who were 37 to 42 weeks pregnant to either wait for natural labor to happen or for labor to be induced.

Most of the trials dealt with women who had no problems other than a prolonged labor, but 10 trials did look at women who were having twins or had other health problems, such as diabetes and high blood pressure.

Overall, about 17 percent of the women who had labor induced ended up having a C-section, compared to about 20 percent of women in the wait-and-see group.

The results suggest that reducing inductions won’t do much to reduce the number of cesarean procedures, according to Soo Downe, a professor at the University of Central Lancashire in the UK.

“It’s really premature to try and reach a conclusion about what might make a difference for it,” said Downe, who published an editorial accompanying the new study in BJOG: An International Journal of Obstetrics & Gynaecology.

Wood also warned that the results of the analysis do not mean that all women whose pregnancy lasts too long should be induced, because better studies are needed.

For example, the trials included in the analysis may have excluded the riskiest patients, which could skew the results.

But, he added, there is a message for women.

Downe added that induction and C-section rates are often regional and women should check their doctor’s and hospital’s rates to get a better projection of whether they’ll be induced or have a C-section.

Does induction of labour increase the risk of caesarean section? A systematic review and meta-analysis of trials in women with intact membranes

Background
Recent literature on the effect of induction of labour (compared with expectant management) has provided conflicting results. Reviews of observational studies generally report an increase in the rate of caesarean section, whereas reviews of post-dates and term prelabour rupture of membrane (PROM trials suggest either no difference or a reduction in risk.

Objective
To evaluate with a systematic review and meta-analysis of randomised controlled trials (RCTs) whether or not the induction of labour increases the risk of caesarean section in women with intact membranes.

Selection criteria
RCTs comparing a policy of induction of labour with expectant management in women with intact membranes.
Data collection and analysis

A total of 37 trials were identified and reviewed. Quantitative analyses with fixed- and random-effects models were performed with revman 5.1.

Main results
Of the 37 RCTs, 27 were trials of uncomplicated pregnancies at 37–42 weeks of gestation. The remaining ten evaluated induction versus expectant management in pregnancies with suspected macrosomia (two), diabetes in pregnancy (one), oligohydramnios (one), twins (two), intrauterine growth restriction (IUGR) (two), mild pregnancy-induced hypertension (PIH) (one), and women with a high-risk score for caesarean section (one). Meta-analysis of 31 trials determined that a policy of induction was associated with a reduction in the risk of caesarean section compared with expectant management (OR 0.83, 95% CI 0.76–0.92).