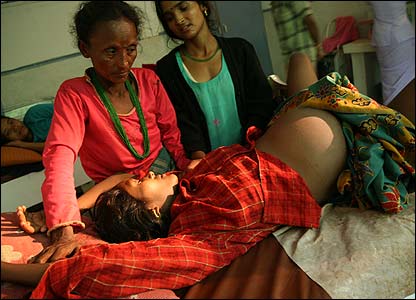 The advice to the United Nations is unambiguous: Don’t repeat the previous mistake of ignoring poor women’s access to contraception in setting goals to reduce maternal and child deaths.

“Women continue to die unnecessarily in childbirth,” wrote a 27-member panel of mostly political leaders who cited World Health Organization estimates that a woman succumbs to complications of pregnancy or childbirth every 90 seconds.

The panel called for providing more well-equipped health facilities, skilled birth attendants and effective contraceptives to help women plan their families.  “Universal access to sexual and reproductive health and rights is an essential component of a healthy society,” wrote the panel that included British Prime Minister David Cameron. “There are still 222 million women in the world who want to prevent pregnancy but are not using effective, modern methods of contraception.”

Another group of of academics, business leaders and experts weighed in with similar advice. It recommended that the world’s nations should “ensure universal access to primary healthcare that includes sexual and reproductive healthcare, family planning, routine immunizations, and the prevention and treatment of communicable and non-communicable diseases.”

Jeffrey D. Sachs, director of the Earth Institute at Columbia University, said that modern contraception remains ensnared in controversial issues. He expects strong objections from a few U.N. members in September when the U.N. General Assembly begins to debate a new set of goals for poverty eradication and sustainable development. Historically, the Vatican and conservative Islamic states have raised such objections.

But Sachs, who was appointed by U.N. Sec. Gen. Ban Ki-moon to organize the recommendations from business leaders and experts, believes that the world’s nations will insist that access to contraceptives be included in comprehensive health strategy.

In 2000, the U.N. adopted eight Millennium Development Goals, a way to nudge the poorer nations to reduce hunger and poverty, and educate their youngsters.  Goal No. 5 was to reduce maternal mortality by 75% by the year 2015.

How to do that?

Five years later, after limited progress, the U.N. recognized the omission and added Goal 5B, which called for “universal access to reproductive health.”

Since then, the medical evidence for the link has grown stronger.

If contraceptives were made available to the 222 million women in poor countries who want to avoid pregnancy, it would avert an estimated 118,000 maternal deaths, according to an analysis by the United Nations Population Fund and the Guttmacher Institute, a New York-based think tank.

Another study tracking more than 1 million children in 42 developing countries showed that a child is three times more likely to make it to his or her 5th birthday if the mother spaces the births of her children by at least three years.

The Millennium Development Goals are set to expire in 2015, prompting broad efforts to come up with a new round of targets, called the Sustainable Development Goals. This time, the idea is to make the goals universal so that all nations - not just developing ones - would issue annual report cards on their progress reducing poverty, unmet schooling, gender inequality and environmental degradation.

A grant from the Pulitzer Center on Crisis Reporting supported this project.

.(JavaScript must be enabled to view this email address)
By Kenneth R. Weiss