An impoverished young Afghan woman has given birth to sextuplets - three boys and three girls - producing the same number of children her countrywomen typically average over a lifetime.

Sara Gul, 22, from the northern Balkh province, said on Tuesday she tried to abort after learning she was pregnant with the brood of six, highlighting the country’s poverty and ignorance surrounding birth control.

“I even jumped from a wall but nothing happened to them,” Gul told Reuters in provincial capital Mazar-e-Sharif, where she gave birth - her first - late Monday.

Maternity ward doctor Abdul Rauf Ferogh confirmed the birth, saying five of the babies were healthy, while the last one was underweight and still in postnatal care. 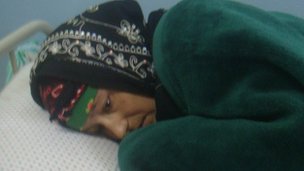 Sharah is exhausted after the unexpected birth of her six children

Rare in nature, multiple births are often the result of medical fertility treatment, although the method does not exist in Afghanistan. Afghans take pride in having large families, but war, conflict and destitution means one in four children die before reaching the age of five.

“Allah blessed me with six children, but I am worried about their future,” said Gul’s 27-year-old husband Shukrullah, who is unemployed, like many others in the war-wracked country

A woman gave birth to sextuplets Monday May 10, 2004, and both the mother and babies were doing well, hospital officials said.

“I’d just like to thank the Lord,” said Jonathan Gosselin, 27, the babies’ father. “It was truly an amazing thing.”

Mr. Gosselin joined doctors and nurses at a late afternoon news conference, where they said the mother was in good condition and the babies in satisfactory condition. All but one of the infants were still on ventilators late Monday afternoon.

“Their excellent condition is a testament to Kate Gosselin’s resolve, and the expert care of our obstetrical staff,” said Dr. Dennis Mujsce, medical director of the hospital’s neonatal intensive care unit.

Sextuplets are rare. Hospital officials said that as of March 15, only 138 documented sets had been born worldwide.

The Ministry of Health warns Afghanistan’s population of 30 million will double in as many years, stunting opportunities for economic growth in what is already one of the world’s poorest nations.

Efforts to promote birth control by the government have been met with caution by aid groups who say introducing contraceptives would be extremely difficult in the ultra-conservative Muslim society, and opposition from Islamic scholars who say they are unlawful.