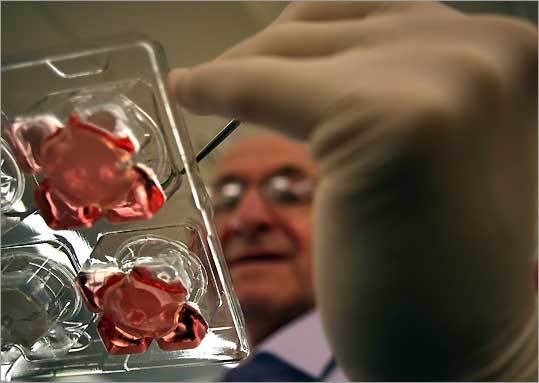 While the human heart can’t heal itself, the zebrafish heart can easily replace cells lost by damage or disease. Now, researchers have discovered properties of a mysterious outer layer of the heart known as the epicardium that could help explain the fish’s remarkable ability to regrow cardiac tissue.

After an injury, the cells in the zebrafish epicardium dive into action - generating new cells to cover the wound, secreting chemicals that prompt muscle cells to grow and divide, and supporting the production of blood vessels to carry oxygen to new tissues.

A study appearing May 4 in the journal Nature found that when this critical layer of the heart is damaged, the whole repair process is delayed as the epicardium undergoes a round of self-healing before tending to the rest of the heart. The new research showed that the process requires signaling through a protein called sonic hedgehog, and demonstrated that adding this molecule to the surface of the heart can drive the epicardial response to injury.

The finding points to a possible target for repairing the damage caused by a heart attack, a major cause of death and disability in the United States. More than five million Americans are currently experiencing heart failure, and over 900,000 suffer from a heart attack each year.

“The best way to understand how an organ regenerates is to deconstruct it. So for the heart, the muscle usually gets all the attention because it seems to do all the work,” said Kenneth D. Poss, Ph.D., senior author of the study and professor of cell biology at Duke University School of Medicine. “But we also need to look at the other components and study how they respond to injury. Clearly, there is something special about the epicardium in zebrafish that makes it possible for them to regenerate so easily.”

Poss has been studying heart regeneration in zebrafish for the last 13 years. As a postdoctoral fellow he was the first to show that the puny, striped fish could regrow severed pieces of heart tissue, like a lizard growing back a pinched tail. Since then, his group has found that this regeneration involves the input of the epicardium, a thin layer of cells that cover the surface of the heart.

“The epicardium is underappreciated, but we think it is important because similar tissues wrap up most of our organs and line our organ cavities,” Poss said. “Some people think of it as a stem cell because it can make more of its own, and can contribute all different cell types and factors when there is an injury. The truth is we know surprisingly little about this single layer of cells or how it works. It is a mystery.”

In this study, Poss and his colleagues were determined to identify the properties of the epicardium that make it such a regenerative powerhouse. First, Duke postdoctoral fellow Jinhu Wang performed open-heart surgery on live zebrafish, removing approximately one fifth of the vital organ. Afterwards he used a set of sophisticated genetic tools to kill 90 percent of the epicardial cells and then measured how well the heart healed at various time points. He found that removing this outer layer created a clear lag in regeneration, but that eventually the healing process caught up to that of zebrafish with an intact epicardium.

The results suggested that the 10 percent of epicardial cells left behind were able to rebuild the epicardial layer before moving on to heart muscle. Intrigued by the finding, Poss decided to focus the next series of experiments on the epicardium and its ability to regenerate itself. Jingli Cao, another postdoctoral fellow in his laboratory, figured out a way to remove hearts from zebrafish and grow them in dishes in the laboratory, where the tiny two-chambered organs continued to beat and behave as if they were still tucked inside the organism.

As they had before, the researchers destroyed most of the heart’s epicardial layer, but this time they put the “explanted” organs under the microscope every day to capture the regeneration in action. They showed that the epicardium regenerated rapidly, covering the heart like a wave from the base of one chamber to the tip of the other in just a week or two.

The researchers then used this model to search for small molecule compounds or drugs that would affect the ability to regenerate. They screened molecules known to be involved in development of embryos, like fibroblast growth factors and sonic hedgehog, and found that the latter was critical for the regeneration process. The researchers now plan to perform larger screens for molecules that could enhance heart repair in zebrafish, and perhaps one day provide a new treatment for humans with heart conditions.

In a second paper appearing April 1, 2015, in the journal eLife, Poss and colleagues found that the epicardium produces a molecule called neuregulin1 that makes heart muscle cells divide in response to injury. When they artificially boosted levels of neuregulin1, even without injury, the heart started building more and more muscle cells. The finding further underscores the role of this tissue in heart health.

“Studies of the epicardium in various organisms have shown that this tissue is strikingly similar between fish and mammals, indicating that what we learn in zebrafish models has great potential to reveal methods to stimulate heart regeneration in humans,” said Poss.

The Nature study was supported by postdoctoral fellowships from the American Heart Association and grants from the National Institutes of Health (HL081674) and the American Federation for Aging Research.