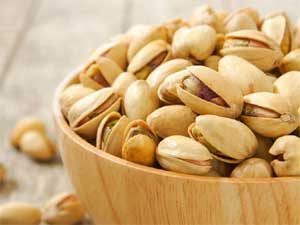 Eating pistachios may reduce your body’s response to the stresses of everyday life, according to a Penn State study conducted by principal investigator Sheila G. West, professor of biobehavioral health and nutritional sciences.

“In adults with diabetes, two servings of pistachios per day lowered vascular constriction during stress and improved neural control of the heart,” West said. “Although nuts are high in fat, they contain good fats, fiber, potassium, and antioxidants. Given the high risk of heart disease in people with diabetes, nuts are an important component of a heart healthy diet in this population.”

West and her colleagues investigated the effects of pistachios on responses to standardized stress tasks in patients with well-controlled Type 2 diabetes who were otherwise healthy. They used a randomized, crossover study design in which all meals were provided. Each of the diets contained the same number of calories.

After two weeks on the typical American diet (containing 36 percent fat and 12 percent saturated fats), participants were randomized to one of two test diets. During the four-week test diets, participants ate only food supplied by the study. The researchers reported the results of this study in the Journal of the American Heart Association on June 30, 2014.

Test diets included a standard heart-healthy diet (27 percent fat and 7 percent saturated fat) and a diet containing two servings per day of pistachios (about 3 ounces or 20 percent of calories from pistachio nuts). The typical research participant consumed about 150 pistachio nuts per day. The pistachio diet contained 33 percent fat and 7 percent saturated fat. Half of the nuts consumed each day were salted and half were unsalted. At the end of each four-week diet period, the researchers measured blood pressure and total peripheral vascular resistance at rest and during two stress tests: a cold water challenge and a confusing mental arithmetic test.

“We found that systolic blood pressure during sleep was particularly affected by pistachios,” she said. “Average sleep blood pressure was reduced by about 4 points and this would be expected to lower workload on the heart.”

The researchers found that the pistachio diet lowered vascular constriction during stress. When arteries are dilated, this reduces the load on the heart. The physical challenge involved immersing one hand into icy water for two minutes.

“This cold stressor produces a large vascular constriction response in most people. In comparison with a low fat diet, the pistachio diet blunted that vascular response to stress,” West said.

The same pattern was seen when participants engaged in a challenging and confusing mental arithmetic task.

“Our participants still felt frustrated and angry during the math test,” West noted. “The pistachio diet reduced their bodies’ responses to stress, but nuts are not a cure for the emotional distress that we feel in our daily lives.”

Sauder added: “As in our last study of pistachios, we did not see lower blood pressure in the laboratory setting with this dose of nuts. However, we were surprised and pleased to see that 24 hour ambulatory blood pressure was lower after the pistachio diet.”

The researchers also recorded improvements in heart rate variability, a measure of how well the nervous system controls heart function. These data indicate that pistachios increased the activity of the vagus nerve, an important part of the parasympathetic nervous system that can be damaged with diabetes.