The extract of onion bulb, Allium cepa, strongly lowered high blood glucose (sugar) and total cholesterol levels in diabetic rats when given with the antidiabetic drug metformin, according to a new study. The study results will be presented Thursday at The Endocrine Society’s 97th annual meeting in San Diego.

“Onion is cheap and available and has been used as a nutritional supplement,” said lead investigator Anthony Ojieh, MBBS (MD), MSc, of Delta State University in Abraka, Nigeria. “It has the potential for use in treating patients with diabetes.”

Two doses of onion extract, 400 and 600 mg/kg/day, strongly reduced fasting blood sugar levels in diabetic rats by 50 percent and 35 percent, respectively, compared with “baseline” levels at the start of the study before the rodents received onion extract, Ojieh reported.

Onion extract led to an increase in average weight among nondiabetic rats but not diabetic rats.

Allium cepa, the onion (also called bulb onion or common onion) and the shallot (A. cepa var. aggregatum), is a monocot bulbous perennial (often biannual). It is the most widely cultivated species of the genus Allium, which includes other important species such as garlic (A. sativum) and leeks (A. ampeloprasum). The name “wild onion” is applied to various Alliums.

Allium species are among the oldest cultivated crops. Diverse representations in Egyptian artifacts dating to 2700 B.C suggest that onions had been cultivated and in wide use by that time (Fritsch and Friesen 2002). The present species, A. cepa, is known only from cultivation, but appears to have been domesticated from wild ancestors in the Central Asian mountains (Brewster 1994).

Numerous cultivars have been developed for size, form, color, storability, resistance to pests and pathogens, and climatic adaptations. Cultivars are divided into the Common Onion Group (A. cepa var. cepa), which contains most of the economically important varieties (including cultivars grown for green or salad onions) and the Aggregatum Group, which includes shallots and potato onions, and typically produce clusters of small bulbs (Brewster 1994).

Onions are widely used on cooking in nearly all regions of the world, and have been used in diverse cultures and rituals throughout history. (See Wikipedia article in full entry; additional details in Block 2010 and Brewster 1994.)

Histologic study of the pancreas removed from each diabetic rat showed that neither metformin nor onion extract healed the damage that resulted from the drug-caused diabetes.

“We need to investigate the mechanism by which onion brought about the blood glucose reduction,” Ojieh said. “We do not yet have an explanation.” 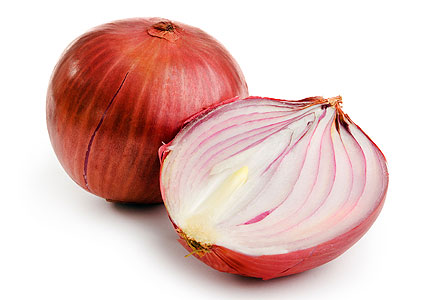 The onion extract used for the experiment was a crude preparation from onion bulb, which is available in the local market. If this were to be administered to humans, it would usually be purified so that only the active ingredients would be quantified for adequate dosing, Ojieh said.