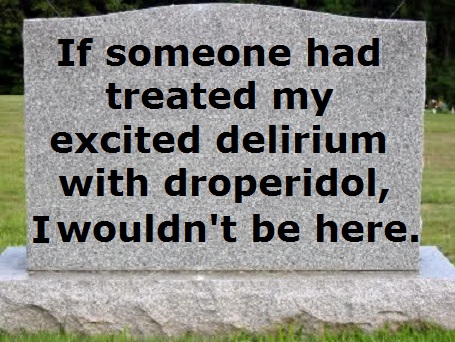 Droperidol is safe and effective for calming violent and aggressive emergency patients, and the negative effects that garnered a black box warning from the Food and Drug Administration (FDA) are actually quite rare. A new study of the once ubiquitous, now scarce, sedating agent was published online Wednesday in Annals of Emergency Medicine (“The Safety and Effectiveness of Droperidol for Sedation of Acute Behavioral Disturbance in the Emergency Department”).

“In our study, the two side effects that led to the black box warning - QT prolongation and torsades des pointes, both heart rhythm disorders - turned out to be rare and non-existent, respectively,” said lead study author Geoff Isbister, MD, of Calvary Mater Newcastle Emergency Department in Newcastle, Australia. “In addition, almost all patients were sedated within 2 hours, which of course is the goal with an agitated patient. We did find some adverse effects in patients who were sedated with droperidol in combination with benzodiazepines.”

Of 1,009 patients sedated with droperidol, six had an abnormal QT not attributed to other factors (such as pharmaceutical intoxication). None developed torsades des pointes. Adverse effects occurred in 5 percent of patients and over sedation without complications occurred in 8 percent of patients, mostly among patients who were given benzodiazepines in addition to the droperidol.

Droperidol is a sedating antipsychotic agent that has been used safely to treat acute behavior disturbance for decades, often in emergency patients who are violent and/or aggressive because of mental illness, intoxication and/or deliberate self-harm. In 2001, the FDA made a controversial decision to give droperidol a black box warning because of reports that it could cause abnormal QT and torsades des pointes. This decision led to marked reduction in the drug’s use worldwide.

“The goal in the management of patients with acute behavioral disturbance is to ensure safety for the patient, staff and other patients in the emergency department,” said Dr. Isbister. “Although our study supports concerns about using benzodiazepines in conjunction with droperidol, high-dose droperidol on its own seems to be both safe and effective for patients who are potentially dangerous to themselves and others.”