Efforts to prevent childhood obesity should begin far earlier than currently thought—perhaps even before birth—especially for minority children, according to a new study that tracked 1,826 women from pregnancy through their children’s first five years of life.

Most obesity prevention programs—including the national initiative recently launched by First Lady Michelle Obama—target kids age 8 and older. Scientists at the Harvard Pilgrim Health Care Institute’s Department of Population Medicine, an affiliate of Harvard Medical School, now say that factors that place children at higher risk for obesity begin at infancy, and in some cases, during pregnancy. Their research also suggests that risk factors such as poor feeding practices, insufficient sleep and televisions in bedrooms are more prevalent among minority children than white children.

“This early life period—prenatal, infancy, to age 5–is a key period for childhood obesity prevention, especially for minority children,” says Elsie Taveras, lead author of the study and an assistant professor of population medicine at Harvard Medical School, as well as the director of the One Step Ahead Program at Children’s Hospital Boston. “Almost every single risk factor in that period before age 2, including in the prenatal period, was disproportionately higher among minority children.”

For the study, which appears online March 1 in the journal Pediatrics, researchers interviewed 1,343 white, 355 black and 128 Hispanic pregnant women at the end of the first and second trimesters, in the first few days following delivery, and when the children were 6 months and 3 years of age. The women also completed questionnaires when the children were 1, 2 and 4 years old.

When compared to Caucasian women, the researchers found that minority women were more likely to be overweight when they became pregnant and Hispanic women had a higher rate of gestational diabetes, both risk factors for childhood obesity. Although the prevalence of two other risk factors—smoking and depression—during pregnancy was higher among African-American and Hispanic women, those rates dropped considerably when the researchers adjusted for socioeconomic status, suggesting that at least those two risk factors may be impacted by income and education levels. 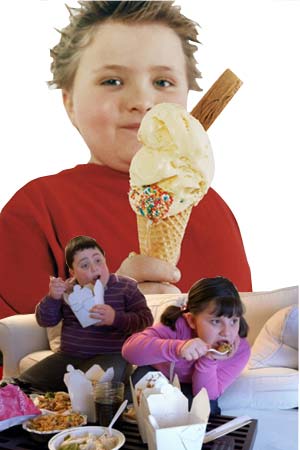 When researchers looked at other risk factors during children’s first five years, they found that African-American and Hispanic infants are more likely than their Caucasian counterparts to be born small, gain excess weight after birth, begin eating solid foods before 4 months of age and sleep less. During their preschool years, the study suggests, minority children eat more fast food, drink more sugar-sweetened beverages and are more likely to have televisions in their rooms than Caucasian children.

One commonly held theory is that the presence of these and other risk factors is caused by limited access to health care, poverty and low educational levels. However, when Taveras and her colleagues adjusted for socioeconomic status, they found that the prevalence of many of the risk factors remained the same.

More likely, Taveras says, the risk factors stem from behaviors and habits passed from generation to generation or that may be culturally embedded. “For a lot of patients I see in my clinic, it’s intergenerational—for example, the grandmother in the home is influencing how her daughter feeds her own child.” That’s especially true when it comes to at what age mothers begin giving their infants solid food or when the mothers decide to stop breastfeeding, Taveras says.

“Sometimes trying to tackle those intergenerational influences can be very difficult, but actually, it’s promising that some of the areas where we did find disparities are modifiable,” Taveras notes. “Anyone who works with families of young children, including pediatricians and child care providers, can work on these issues.”

The far more difficult task would be to address problems that are related to socioeconomic status. In this study, that didn’t play as large a role because participants had access to good prenatal and pediatric care for their children and were well-educated.

“We found these striking disparities even in this population, where we had racial and ethnic minority families who were of relatively higher education and income,” she says. “Imagine what the disparity would be in a population that’s of lower socioeconomic status.”

That’s a question Taveras plans to tackle next. The goal now is to look at other novel risk factors that might be more common among minority populations—including those that will likely be tied to income and education.

This research was funded by the National Institutes of Health’s National Center on Minority Health and Health Disparities and the Robert Wood Johnson Foundation.

Harvard Pilgrim Health Care (http://www.hphc.org) is a not-for-profit health plan operating in Massachusetts, New Hampshire, and Maine with more than one million members. Harvard Pilgrim is the #1 commercial health insurance plan in America for the fifth consecutive year according to an annual joint ranking of the nation’s best health plans by U.S.News & World Report.