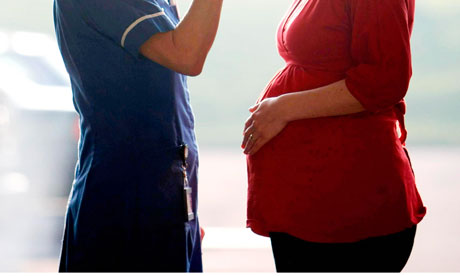 Obesity raises the chances of complications and medical interventions in childbirth. But a new study by Oxford University shows the risks are not the same for all obese women.

For otherwise healthy women, the increase in risk with obesity may not be as great as previously suspected.

‘The increased risk was fairly modest for obese women who did not have conditions such as high blood pressure, diabetes or a previous caesarean section, and the risks were quite low if the woman had given birth previously,’ says lead researcher Dr Jennifer Hollowell of the National Perinatal Epidemiology Unit at Oxford University.

‘It is important to appreciate that we are not saying that obesity isn’t important or that obesity doesn’t increase a woman’s risks during pregnancy,’ she adds. ‘We found that around half of very obese women giving birth in obstetric units have medical problems or pregnancy complications when admitted. But our study focused on women who were obese but otherwise healthy when they went into labour, and some of them had much lower risks than might have been expected.’

The Oxford University researchers point out that, among healthy women with a straightforward pregnancy, childbirth risks are influenced more by whether someone is a first-time mum than whether they are obese.

They found that the chances of first-time mums of normal weight having medical interventions or complications during childbirth are greater than for ‘very obese’ but otherwise healthy women having a second or subsequent child. The findings are published in the British Journal of Obstetrics and Gynaecology.

Dr Hollowell comments: ‘This finding does highlight a possible anomaly in the guidance given to women on where to give birth.’

First-time mothers with low-risk pregnancies can plan to have their child in hospital, at home, in a free-standing midwife-led unit or an alongside midwifery unit connected to a hospital – according to what is available where they are.

However, current guidelines suggest all women with a body mass index (BMI) over 35 should be advised to have the birth in an obstetric unit to reduce risk.

Guidelines on assessing risks for women in planning births take no account of whether a woman is having their first child or has already had children.

‘We think that the guidelines might need to be reviewed to take account of this more nuanced understanding of the effect of obesity,’ says Dr Hollowell. ‘We think it’s worth considering whether it might be safe to allow some healthy obese women having a second baby the option of a birth in an alongside midwifery unit where obstetric and neonatal care is available on site if needed.’

The researchers investigated the influence of BMI on the chances of healthy women having any type of complication during labour and childbirth that would need hospital care – either in an obstetric unit for the mother or a neonatal unit for the baby.

This included a range of medical interventions and complications that varied in urgency and severity, ranging from being given drugs to help with labour progressing slowly, through to having a caesarean section or assisted delivery by forceps or ventouse, significant loss of blood resulting in a blood transfusion, and the baby being admitted to a neonatal unit.

The researchers included data for 17,230 women who’d had straightforward pregnancies and had no medical conditions that might influence risks at labour and birth.

Around half of obese women planning a normal birth after a straightforward pregnancy have no medical or obstetric risk factors such as diabetes or high blood pressure, so this is an important group to study.

The risks of complications during childbirth did go up with increasing body mass index among these healthy women. But the researchers found the increase was modest. Overweight, obese or very obese women showed a relative increase in risk of 6-12% compared to women with a normal BMI.

Most of the additional risk of needing treatment was accounted for by giving drugs for slow labour among those with a high body mass index, though risks of serious outcomes for mother and baby were also increased.

However, whether a woman has had a previous baby plays a larger role in influencing the chances of needing hospital care. 53% of women of normal weight having their first baby had an intervention or a complication at birth. The figure was 21% for very obese but otherwise healthy women having a second or subsequent baby.

This study was funded by the Department of Health. The funders had no role in the design, analysis or interpretation of the data. The analysis makes use of data from the giant Birthplace study.

The paper ‘The impact of maternal obesity on intrapartum outcomes in otherwise low risk women: secondary analysis of the Birthplace national prospective cohort study’ is to be published in the British Journal of Obstetrics and Gynaecology with an embargo of 00:01 UK time on Wednesday 11 September 2013.

The landmark Birthplace study of almost 80,000 births between April 2008 and April 2010 looked at the safety of maternity care in England according to where women with ‘low risk’ pregnancies planned to give birth.

This new analysis was carried out to assess the impact of BMI on need for hospital care, as that may influence where women choose to give birth.

Data from the Birthplace study was included for all mothers with no medical or obstetric risk factors who planned a birth in an obstetric unit and whose BMI was recorded. Only planned births in obstetric units were included as that is where the vast majority of women with high BMIs give birth.

Women were considered to be ‘otherwise healthy’ if they did not have any of the medical or obstetric risk factors listed in the NICE clinical guideline for intrapartum care as indicating ‘increased risk suggesting planned birth in an obstetric unit’. The risk factors that are more common in obese women include pre-existing diabetes and gestational diabetes, pre-existing hypertension and pre-eclampsia or pregnancy-induced hypertension, need for induction of labour and previous caesarean section.

The National Institute for Health and Care Excellence is currently updating guidelines for care during labour and childbirth.

Obesity is associated with problems at all stages of having children – difficulty in conceiving, greater chances of miscarriage, and increased risk of complications during pregnancy. This study gives much greater information about the increase in risk at childbirth.

Oxford University’s Medical Sciences Division is one of the largest biomedical research centres in Europe, with over 2,500 people involved in research and more than 2,800 students. The University is rated the best in the world for medicine, and it is home to the UK’s top-ranked medical school.

From the genetic and molecular basis of disease to the latest advances in neuroscience, Oxford is at the forefront of medical research. It has one of the largest clinical trial portfolios in the UK and great expertise in taking discoveries from the lab into the clinic. Partnerships with the local NHS Trusts enable patients to benefit from close links between medical research and healthcare delivery.

A great strength of Oxford medicine is its long-standing network of clinical research units in Asia and Africa, enabling world-leading research on the most pressing global health challenges such as malaria, TB, HIV/AIDS and flu. Oxford is also renowned for its large-scale studies which examine the role of factors such as smoking, alcohol and diet on cancer, heart disease and other conditions.