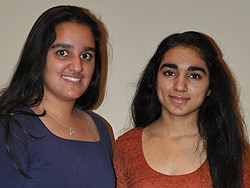 Ilina Krishen became aware of the dangers of smoking and chemical air pollution when she saw the effects of lung disease on family members. Curious to find a way to detect early lung damage in people exposed to noxious air pollutants, Ilina, a high school senior at Port Huron Northern High School in Michigan, developed a screening mechanism using an electronic stethoscope. An electronic stethoscope overcomes the problem of low sound levels by electronically amplifying body sounds, using an electromagnetic diaphragm that captures the diaphragm movement as an electrical signal.

Ilina recruited 16 smokers, 13 firefighters, and 25 nonsmokers for her test. The electronic stethoscope recorded one breath cycle from each volunteer. Frequency peaks were used to analyze the frequency distribution of breath sounds. Differences of peaks above 125 Hz were analyzed.

Ilina found that the number of peaks was significantly higher in smokers and firefighters, even if the firefighters were nonsmokers.

She realized that although firefighters wear protective masks when fighting fires, they often do not wear masks when making a second check of the building after the fire is out. “The firefighters are exposed to many poisonous chemicals that remain in the air after the fire has gone out,” said Ilina. “Screening with an electronic stethoscope may be able to detect early changes in lung function in individuals without symptoms of lung disease.”

“When I was in fifth grade, a family friend died after exercise, and I always wanted to learn more about how to prevent something like that happening,” said Medha. “My study analyzing heart sound frequencies may be a useful technique that school staff could use to screen for HCM.”

The sisters are both athletes—Ilina is a varsity tennis player, and Medha is an accomplished figure skater - and they take a personal interest in the health of athletes. They are also nonsmokers and hope to encourage others not to smoke. After Ilina completed her study and showed her study subjects the results of her tests “two or three of the smokers have quit smoking, and that makes me feel good,” says Ilina.

CHEST 2014 is the 80th annual meeting of the American College of Chest Physicians (CHEST), held October 25-30, 2014, in Austin, Texas. The American College of Chest Physicians, publisher of the journal CHEST, is the global leader in advancing best patient outcomes through innovative chest medicine education, clinical research, and team-based care. Its mission is to champion the prevention, diagnosis, and treatment of chest diseases through education, communication, and research. It serves as an essential connection to clinical knowledge and resources for its 18,700 members from around the world who provide patient care in pulmonary, critical care, and sleep medicine. For information about the American College of Chest Physicians, visit chestnet.org, or follow the CHEST meeting hashtag, #CHEST2014, on social media.

Kristi Bruno
.(JavaScript must be enabled to view this email address)
773-750-9962
American College of Chest Physicians