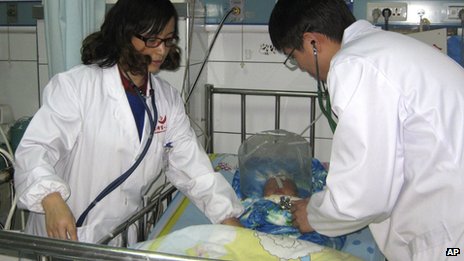 China has been beset by a series of product safety scandals over the past few years.

At least six children died in 2008 after drinking milk contaminated by the industrial chemical melamine, and there have also been reports of children dying or becoming seriously ill from faulty encephalitis, hepatitis B and rabies vaccines.

State news agency Xinhua said that of the seven deaths from the hepatitis B vaccine in the latest case, four were in the southern province of Guangdong. The other cases were in the provinces of Hunan and Sichuan.

The official China Daily said that all hospitals using the vaccine, made by Shenzhen-based BioKangtai, had been ordered to take it off their shelves while the Health Ministry investigates the company’s products and the deaths.

The company said in a statement last week, carried by state media, said that it rigorously followed safety rules but that they were testing the batches suspected of causing the deaths.

The topic has been widely discussed on China’s popular Twitter-like microblogging service Sina Weibo, with many people worried about the safety of China’s vaccines and calling on the government to make more information public.

“Why was this allowed onto the market? The government needs to come clean about this,” wrote one Weibo user.

Many Chinese people are suspicious that the government tries to cover up bad news about health problems, despite assurances of transparency. In 2003, the government initially tried to cover-up the outbreak of the SARS virus.