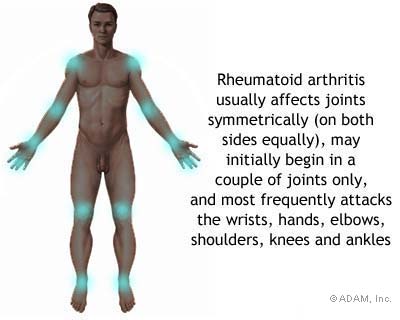 People who are overweight when they are diagnosed with rheumatoid arthritis are less likely to be able to control the disease well in its early stages than people of a healthy weight, according to a new study.

In rheumatoid arthritis, the body’s immune system attacks its own connective tissue, destroying the cartilage that protects joints. The condition leads to stiffness, joint swelling and whole-body fatigue.

Unlike the more common osteoarthritis, or “wear-and-tear” arthritis, which affects people as they get older, rheumatoid arthritis can happen at any age. It affects less than one percent of adults, or 1.3 million people in the U.S., according to the American College of Rheumatology.

Most patients will experience improvement when they start treatment, but only a minority will go into remission, said Dr. Paul-Peter Tak of the Academic Medical Center at the University of Amsterdam, who was not part of the new research.

The study included almost 500 adults in the early stages of rheumatoid arthritis between 2006 and 2009.

Researchers reviewed a Swedish rheumatology database that included each patient’s self-reported height and weight at diagnosis and information on how the disease had progressed over the next six months.

Data from participants in the high-intensity - not high-impact - program dispelled the long-held notion that joints affected by RA needed more rest and protection than movement. None of the participants experienced a flare, and all improved endurance, gained lean body mass and lost abdominal, back and chest fat. Improve­ments also were seen in people with cachexia - so much so that a larger trial is nearing completion to determine the effectiveness of PRT as a treatment for cachexia along with medications that control RA.

“The novelty of the study was not in the kind of exercises used - because over the course of a long-term training program, the exercises performed must be changed regularly, anyway - but rather in seeing the frequency and intensity at which people with RA could work,” says Samuele Marcora, PhD, exercise physiologist at the University of Wales in Bangor, United Kingdom.

To initially increase muscle strength, Marcora recommends using weight machines and then progressing to dumbbells. After several months working under the supervision of a qualified instructor to increase strength, Marcora says resistance bands could then be used at home for “maintenance” training.

More than 90 percent of the patients were put on so-called disease-modifying antirheumatic drugs (DMARDs) at the time of their diagnosis, usually methotrexate.

Generic versions of methotrexate cost $1 or $2 per tablet.

Overweight patients were 33 percent less likely to have low disease activity, a sign that medication is keeping the condition in check, at the three-month point than those with a healthy weight.

They also tended to report more pain at three and six months and were less likely to be in remission than patients with a healthy weight, according to results published in the Annals of the Rheumatic Diseases.

What Weight Does to Your Joints

If you are at all overweight, one of the best ways to reduce osteoarthritis pain is by taking off excess pounds. Being overweight increases the load that you put on your joints - your knees, your hips, your ankle - with every step you take.

“When we walk, when we go up and down stairs, or get into or out of a chair or car, we can put three to five times our body weight, and sometimes more, on the joints,” says Geoffrey Westrich, attending orthopedic surgeon and Director of Joint Replacement Research at the Hospital for Special Surgery in New York. “So if you’re 50 pounds overweight, you’re putting around 250 pounds of increased stress across your knees and hips.”

Over time, that extra weight makes you much more prone to developing arthritis and can cause arthritis to progress much more rapidly, leading to much more pain once it has developed.

Fortunately, the same principle works in reverse. “For every pound people lose, they lose 3 pounds of stress across their knee and 6 pounds of stress on their hip, on average,” says Westrich.

Having more body fat could affect the course of rheumatoid arthritis itself or how well medications work to treat it, possibly by leading to more inflammation, Maria E. C. Sandberg told Reuters Health by email.

Sandberg worked on the study at the Karolinska Institutet in Stockholm.

A smaller study published in 2011 found that obese rheumatoid arthritis patients were less likely to see clinical improvement with more expensive second-line medications, which are used when methotrexate doesn’t work, even when the medication dosage was adjusted for weight.

The new study found essentially the same thing in a larger group of patients receiving their first round of treatment, Tak said.

Rheumatoid arthritis itself is a risk factor for heart disease, which makes a healthy lifestyle even more important, he said.

Weight is probably not the only factor that can affect rheumatoid arthritis prognosis, Sandberg said.

“There are likely very many factors affecting the therapy response by different mechanisms and research is ongoing to find and confirm them,” she said. “Hopefully these factors can then be combined into a model which can predict which medication can best help the different patient groups.”

SOURCE: Annals of the Rheumatic Diseases, online May 12, 2014