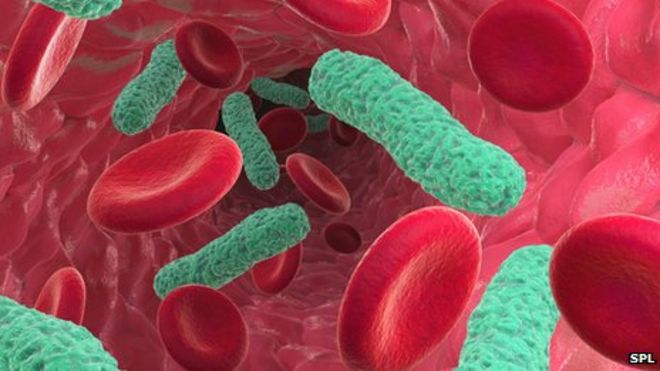 Major infections such as influenza and bacterial sepsis kill millions of people each year, often resulting fro dangerous complications that impair the body’s blood vessels. But the reasons why some patients experience these dramatic responses to infections -  and others don’t -  have been unclear.

Now a research team led by investigators in the Center for Vascular Biology Research (CVBR) at Beth Israel Deaconess Medical Center (BIDMC) has shown that variations in the Tie2 gene, which is expressed on the inner surface of blood vessels, play an important role in patient responses. The new findings, which appear online this week in the Proceedings of the National Academy of Sciences (PNAS), demonstrate that diminished Tie2 levels are associated with potentially devastating responses to infections, while higher Tie2 levels provide protection. This new discovery suggests that Tie2 could be an important target to help clinicians more quickly determine which patients are at highest risk of developing these life-threatening vascular complications following infectious disease.

“The complications arising from sepsis and other infections can appear rapidly and dramatically, leaving patients in absolutely terrible shape,” said senior author Samir Parikh, MD, an investigator in BIDMC’s CVBR and Division of Nephrology and Associate Professor of Medicine at Harvard Medical School. “Patients might arrive at the hospital feeling generally unwell and within a few hours, can be in critical condition.” But, this is not the case for everyone: many other patients arrive at the hospital with the same infectious symptoms, but get no worse and go on to recover fully.

In studying the host response to infections, researchers have for many years focused on the role of the innate immune system. More recently, the focus has broadened to include the role played by the body’s vascular system.

“Improperly functioning blood vessels can have lethal consequences,” explained Parikh. “For example, when the lungs’ small blood vessels become leaky, the lungs fill with water and stop working properly, resulting in an often fatal condition called acute respiratory distress syndrome [ARDS]. No matter what type of infection a patient has initially, if he or she goes on to develop vascular leakage, that patient is in trouble. We wanted to find out if the Tie2 protein played a role in determining whether or not patients experience these devastating vascular complications,” said Parikh.

The authors first determined in mouse models of several infections -  including the parasitic infection malaria, the viral infection influenza and the bacterial infection sepsis - that all animals had decreased levels of Tie2 compared to baseline levels. Subsequent experiments revealed that reduced Tie2 was indeed setting the stage for vascular leakage and ensuing clinical complications in the animal models.

“The Tie2 gene is essential for embryonic development and knockout mice without the Tie2 gene die in utero,” said corresponding author Chandra Ghosh, PhD, a member of the Parikh laboratory at BIDMC. “Interestingly, mice with a single copy of the gene behave normally until they are challenged with infections.”

After genomic analysis identified common variants that influence Tie2 expression, the authors examined a cohort of more than 1,600 intensive care unit (ICU) patients overseen by the research group of coauthor David Christiani, MD, MPH, at the Harvard T. H. Chan School of Public Health, to determine if variation in Tie2 expression was associated with the development of ARDS. Indeed, the members of the cohort who had genetic variants linked to low Tie2 levels were at higher risk for developing ARDS, while those with genetic variants linked to higher Tie2 levels were protected from this devastating complication.

“This discovery was exciting,” said Parikh. “It was an exact match with the variants we had just identified in the genomic analysis. It supported our hypothesis that greater amounts of Tie2 protein may help people handle the stress of infection, while less-than-normal amounts of the protein leave individuals vulnerable to these dangerous complications.

“Our research appears to offer the first genetic evidence that the Tie2 gene itself may be an important target to think about in terms of clinical development,” added Parikh. “Many more studies are needed to understand how the body’s vasculature reacts to the stress of infection. These may not be massive differences at the level of genes and gene expression, but we think they are commonly present and of high enough magnitude that they could tip the scales. Many patients with severe infections are walking a fine line between recovery and deadly complications like ARDS. If the body is genetically hard-wired to better sustain Tie2 in those critical hours, it might put that patient’s health on a whole different path.”

Beth Israel Deaconess Medical Center is a patient care, teaching and research affiliate of Harvard Medical School and consistently ranks as a national leader among independent hospitals in National Institutes of Health funding.

Bonnie Prescott
.(JavaScript must be enabled to view this email address)

Journal
Proceedings of the National Academy of Sciences