A new study suggests an additional - and somewhat surprising - potential benefit of vaccinating children against rotavirus, a common cause of diarrhea and vomiting. Besides protecting kids from intestinal illness caused by rotavirus, immunization may also reduce the risk of related seizures, according to findings published in Clinical Infectious Diseases and available online.

Lead study author Daniel C. Payne, PhD, MSPH, from the Centers for Disease Control and Prevention (CDC), and colleagues from CDC and other institutions carried out a retrospective analysis that included roughly a quarter of a million U.S. children born between March 2006 and November 2009. All were enrolled in the Vaccine Safety Datalink, a nationwide project that collects data for vaccine safety research, and included 186,502 children fully immunized against rotavirus (74.4 percent) and 64,099 who were not (25.6 percent).

The researchers found that children who were fully vaccinated against rotavirus had an approximately 20 percent reduced risk of seizure-related hospitalizations and emergency department visits during the year following vaccination, compared to unvaccinated children. “The protective association we found between rotavirus vaccination and seizures is another good reason for having your child fully vaccinated against rotavirus,” Dr. Payne said.

Although several mechanisms could explain the protective association, the most probable, the study authors wrote, is that “vaccination directly prevents systemic rotavirus infection, including extra-intestinal complications involving the central nervous system.” Seizures have been observed in children with acute intestinal illness caused by rotavirus: A large multi-center Canadian study from 2007, for example, estimated that 7 percent of young patients hospitalized with rotavirus illness experienced seizures.

The authors of this latest study estimated that rotavirus vaccination could potentially save more than $7 million in U.S. health care costs each year by preventing approximately 1,000 hospitalizations and 5,000 emergency room visits for seizures among young children. “Caring for children who have seizures can be expensive and emotionally taxing for families,” Dr. Payne said. “Seizures sometimes lead to painful procedures, medication regimens, trips to the emergency room, or hospital stays.”

Rotavirus vaccine
An oral vaccine against rotavirus infection, a common cause of diarrhoea and sickness, is given as two doses for babies aged 2 months and 3 months alongside their other routine childhood vaccinations.

The vaccine, called Rotarix, is given as a liquid from a dropper straight into the baby’s mouth for them to swallow.

Rotavirus is a highly infectious stomach bug that typically strikes babies and young children, causing an unpleasant bout of diarrhoea, sometimes with vomiting, tummy ache and fever. Most children recover at home within a few days, but nearly one in five will need to see their doctor, and one in 10 of these end up in hospital as a result of complications such as extreme dehydration. A very small number of children die from rotavirus infection each year.

The reduction in seizure risk the researchers found complements the already well-documented benefits of vaccinating kids against rotavirus - declines in doctor’s office visits, emergency room visits, and hospitalizations for severe diarrhea - noted Geoffrey A. Weinberg, MD, of the University of Rochester School of Medicine and Dentistry, in an accompanying editorial.

“Work such as this not only is interesting scientifically, but provides yet another reason to strongly promote universal rotavirus immunization,” Dr. Weinberg wrote. “In addition, the work provides us an opportunity to reflect on the fact that sometimes, unexpected effects of vaccination are beneficial and are a cause for celebration, rather than the more commonly publicized concern for unexpected adverse effects.”

Goals for the Rotavirus Vaccine

I’ve worked on rotavirus since 1982, and got involved in it in a very interesting way. I was trained as a virologist, working on respiratory syncytial virus. I arrived at my hospital, didn’t have a laboratory, and was able to work on rotavirus in a room with no running water. It was rather like being in the Third World, but it’s turned out to be a very interesting virus. It’s very exciting times for those of us who have been working on this virus to see that, finally, after some setbacks, it looks like we may well have a vaccine to prevent all of the things that you’ve been hearing about.

Let me first talk about what is going to be our goal for rotavirus vaccine.

When you think about vaccines, you think about measles vaccine, chickenpox vaccine, or other vaccines that we have in our armamentarium; and most of these vaccines absolutely prevent getting another infection. Rotavirus is different; you get infected over and over again.

Our goal then for rotavirus vaccine is to have children, who are getting infected more than once, to have their first infection with a vaccine rather than a natural infection, getting therefore not the severe infection that you’re going to see, but a milder infection. And then, their subsequent exposures to the virus should lead to either no disease or mild disease. We know, from what Dr. Staat told us, that first infections do result in severe gastroenteritis; so, those are the ones that we want to prevent.

We don’t know what the antibodies are that help us to deal with rotavirus. Unfortunately, most of our rotavirus research has had to be very large trials looking at whether you have rotavirus disease or not, unlike some of the other vaccines that were licensed on the basis of - if you develop this antibody level to Haemophilus influenzae, for example, this vaccine works. With rotavirus, we haven’t been able to do that, so it’s been a much more laborious process.

Our goals for this vaccine are to duplicate the degree of protection that follows natural infection; that’s an ideal. We can’t do too much better than “Mother Nature,” so we really want to mimic Mother Nature. We want to prevent that first moderate-to-severe infection, but we’re not going to be preventing mild or asymptomatic disease with this vaccine. We want to reduce the disease burden in the United States, which is going to reduce hospitalizations and visits to emergency rooms and to caregivers’ offices. But we also want to provide a vaccine in the developing country where, as Dr. Staat showed you, the mortality for rotavirus is high, and where children are literally dying every few minutes of rotavirus infections.

What have been the approaches that people have used to try and deal with a vaccine to prevent rotavirus infection?

There have been 3 major approaches: The first was monovalent animal rotavirus vaccines, the second was multivalent human-animal reassortant vaccines, and the third approach has been attenuated human strains. I’m going to talk about each of these.

The monovalent animal rotavirus vaccines came about because humans, when infected with rotaviruses from other strains that came from animals, such as cows, pigs, or monkeys, don’t get sick from those viruses. Much like Jenner discovered that cowpox could be given to humans and prevent smallpox; the same is true with rotavirus. You can give a virus that is not a normal pathogen for humans; it causes some immunity to develop, but it doesn’t cause disease. These animal rotaviruses do grow very well in cell cultures, so they were a good guess, to at least start from, to make vaccines.

Unfortunately, the vaccines were very disappointing. Animal rotaviruses are usually not the same serotypes as human rotaviruses; and that was a big problem because most of the time, you want to have the same serotype to get the best protection. These vaccines gave very inconsistent results and generally low protection against human serotypes, so they were abandoned and people turned to other approaches.

The approach that was adopted next was to develop multivalent human-animal reassortant vaccines. These vaccines contain the 2 most important genes, the VP4 and the VP7 gene, that code for those 2 important proteins on the surface of the virus. Two such vaccines were developed: the first one was the simian-based vaccine, RotaShield (rotavirus vaccine, live, oral, tetravalent); and the second vaccine is newly licensed, which is bovine-based, and is called RotaTeq (rotavirus vaccine, live, oral, pentavalent).

Rotavirus is a common cause of diarrhea and vomiting in young children, and can also lead to seizures in some children with serious cases of illness.
Researchers found that U.S. children who were fully vaccinated against rotavirus had an approximately 20 percent reduced risk of seizures during the year following vaccination, compared to unvaccinated children.
The research adds to the already well-documented benefits of rotavirus vaccination, which has led to declines in doctor’s office visits, emergency room trips, and hospitalizations for severe diarrhea. 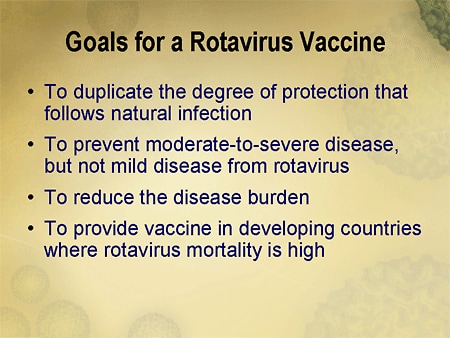 Clinical Infectious Diseases is a leading journal in the field of infectious disease with a broad international readership. The journal publishes articles on a variety of subjects of interest to practitioners and researchers. Topics range from clinical descriptions of infections, public health, microbiology, and immunology to the prevention of infection, the evaluation of current and novel treatments, and the promotion of optimal practices for diagnosis and treatment. The journal publishes original research, editorial commentaries, review articles, and practice guidelines and is among the most highly cited journals in the field of infectious diseases. Clinical Infectious Diseases is an official publication of the Infectious Diseases Society of America (IDSA). Based in Arlington, Va., IDSA is a professional society representing nearly 10,000 physicians and scientists who specialize in infectious diseases.

Jerica Pitts
.(JavaScript must be enabled to view this email address)
312-558-1770
Infectious Diseases Society of America