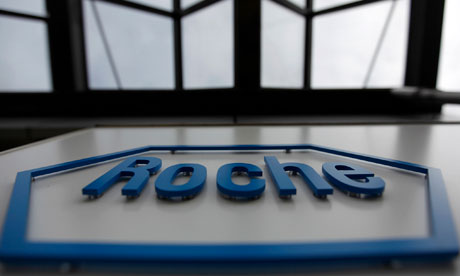 The Swiss drugmaker said on Sunday it would pay $74.00 a share through a tender offer for InterMune, representing a premium of 38 percent to the closing price on Aug. 22.

The acquisition, which has been recommended by the boards of both companies, is the largest by Roche since 2009, when it bought out the remaining stake it did not already own in U.S. group Genentech for around $47 billion.

Chief Executive Severin Schwan said the deal would allow Roche to broaden and strengthen its respiratory portfolio, adding he believed there was a good strategic and cultural fit between Roche and the California-based biotech firm.

“For us at Roche, this transaction is a good example of a value-creating bolt-on acquisition; we focus on targeted acquisitions that really compliment our portfolio (...) rather than trying to diversify or going into mega mergers,” he told reporters on a conference call.

The sale of InterMune will not surprise investors hugely as people familiar with the matter said on Aug. 13 InterMune was working with financial advisers to evaluate strategic options, due to takeover interest from big drugmakers.

Shares in the InterMune rose sharply on that news, so the $74 offered by Roche marks a 63 percent premium to the stock’s level on Aug. 12.

Such a hefty premium is not unusual in biotech takeovers, reflecting intense competition for promising new drugs among larger companies, which rely on small innovative firms for a growing proportion of their products.

Adding InterMune to its portfolio will give Roche a promising new drug, pirfenidone, for treating a progressive and ultimately fatal scarring condition of the lungs. Pirfenidone is approved for so-called idiopathic pulmonary fibrosis (IPF) in Europe and Canada, and is undergoing U.S. regulatory review.

Industry analysts expect the drug, which is given as a pill, to have sales of $1.04 billion in 2019, according to consensus forecasts compiled by Thomson Reuters Pharma.

The deal is a further step by Roche to diversify away from its reliance on cancer drugs, where it is the world leader, by expanding into other disease areas, such as respiratory medicine.

Roche already markets Pulmozyme for cystic fibrosis and Xolair for severe asthma in the United States and has other experimental respiratory products in clinical development, including another severe asthma drug called lebrikizumab.

However, the Swiss group’s efforts to produce successful non-cancer drugs from its own labs have been mixed, with setbacks in recent years for experimental drugs against heart disease, diabetes and schizophrenia.

Although it is paying a big price for InterMune, the deal is seen inside Roche as a “bolt-on” acquisition, given the company’s own market value of around $250 billion.

Roche said the transaction was expected to be neutral for its core earnings per share in 2015 but would boost profits from 2016 onwards. It said guidance for this year remained unchanged.

The Swiss company generates a large amount of cash, leading to persistent speculation about deals. In practice, its track record since Genentech has been for a series of small-scale purchases. It notably backed away from a $7 billion pursuit of gene sequencing firm Illumina Inc two years ago.

Recently, there has been talk that Roche might buy the shares in Japan’s Chugai Pharmaceutical Co Ltd that it does not already own for about $10 billion, although Chugai has denied it was in talks for a such a deal.

Schwan declined to comment on whether the InterMune deal would make a buyout of Chugai less likely. He said Roche would continue to pursue targeted “bolt-on” acquisitions.

Even after swallowing InterMune, Roche would still have the leverage to “very easily” buy out the rest of Chugai and do something else, said Kepler Cheuvreux analyst Fabian Wenner. But he conceded such a move may now be “somewhat less likely”.

InterMune had considered selling itself about three years ago but decided not to pursue a deal at that time due to uncertainty over clinical data for pirfenidone, people familiar with the matter told Reuters previously.

Roche said its interest in a deal was triggered following positive late-stage trial results for the drug in May. The medicine also received a “breakthrough therapy” designation from the U.S. Food and Drug Administration (FDA). The term is reserved for drugs for serious diseases that appear to offer a substantial advance on existing therapies.

The FDA is due to give is verdict on whether to approve pirfenidone by Nov. 23 and Roche said it expected the launch the drug in the United States this year.

Under the terms of the InterMune agreement, Roche will commence a tender offer to acquire all outstanding shares in the U.S. firm no later than Aug. 29.

Citi is acting as financial adviser to Roche, while Centerview Partners and Goldman Sachs are acting for InterMune.

By Ben Hirschler and Caroline Copley