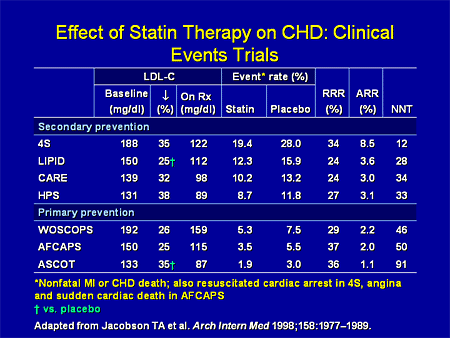 A large international study, published today in The Lancet, has shown conclusively that statin treatment reduces the risk of cardiovascular disease in women.

Whether statin therapy is as effective in women as in men is debated, especially for primary prevention. This study compared the effects of statin therapy between men and women.

The research confirms that statins are beneficial not only to women who have already had a cardiovascular event such as a heart attack or stroke, but also in those who - whilst they have not yet developed cardiovascular disease - are at an increased risk of such diseases.

Lead investigator Anthony Keech, Professor of Medicine, Cardiology and Epidemiology at the University of Sydney said “These results resolve a major uncertainty about the value of treating women with statin therapy, and reinforce the need for recommendations to treat women to be included in national and international guidelines.

“It has long been known that, by reducing low-density lipoprotein (LDL) cholesterol, statin medications prevent heart attacks and strokes in people at risk of these diseases.

“This analysis of the effects of statins on 174,000 patients, undertaken by combining results from 27 different trials, shows beyond any reasonable doubt that women gain the same benefits from statins as men,” he said.

Overall, statin treatment reduced the risk of a major vascular event (heart attack, stroke, bypass surgery, cardiac death) by 21% for each 1 mmol/L reduction in LDL cholesterol achieved. The percentage risk reductions were similar in women and men, irrespective of any history of cardiovascular disease.

Such benefits from statin treatment translated into a significant reduction (9% risk reduction for each 1 mmol/L reduction in LDL-cholesterol) in the overall risk of death in both men and women - a finding for women which has not been previously reported by any individual statin trial.

“There has been a recent worldwide shift towards recommending treatment with statins to people without existing cardiovascular disease but with a sufficiently high risk of future disease. The results of this study will reassure doctors that these risk-based guidelines for treatment can be applied to men and women equally,” Professor Keech said.

Co-investigator Dr Jordan Fulcher from University of Sydney said “Heart attacks and stroke are major problems in women just as they are in men. In Australia, more than 11,500 women die of these two diseases every year.

“Far too few women realise they are at greater risk of dying from a heart attack than from breast cancer and this study should reassure them that, if advised by their doctor, they can reduce that risk by taking a statin.”

Professor Len Kritharides, Chair of the Cardiovascular Health Advisory Committee of the Heart Foundation of Australia, welcomed these new results as very important: “They show unequivocally that statins similarly benefit men and women in preventing heart attacks without evidence of serious harm. Importantly, the study also demonstrates that treatment with statins improves overall survival in men and women. These results should give great encouragement to patients and their doctors that lowering cholesterol with statins prevents cardiovascular disease.”

Kobi Print
.(JavaScript must be enabled to view this email address)