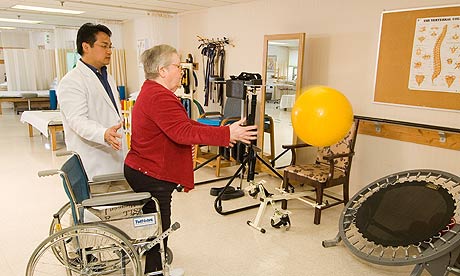 Exercise on a motorized stationary bike appeared to give stroke patients an advantage in relearning everyday tasks and improved motor function of their arms, according to research presented at the American Stroke Association’s International Stroke Conference 2015.

Aerobic exercise has been shown to help the brain learn information. The role of aerobic exercise in enhancing neuroplasticity - the brain’s ability to reorganize itself and form new connections - has not been well studied.

Stroke had occurred six to 12 months prior to study enrollment. All patients participated in upper extremity repetitive task practice to help regain arm use such as relearning how to hold a cup or fork or relearning how to dress themselves as well as improve their quality of life.

Patients who exercised on the motorized stationary bike before their repetitive task practice session experienced a 34 percent improvement in their motor skills compared with 16 percent improvement among those who cycled on their own and 17 percent for those who doubled up on repetitive task practices but did not receive aerobic exercise training on the bicycle. In addition, improvements in self-reported quality of life and depressive symptoms improved across all three groups, with trends favoring the motorized cycling group.

“Forced exercise administered via a motor-assisted stationary bicycle has shown to help patients with Parkinson’s disease, another neurological disorder, and may improve neuroplasticity,” Linder said. The advantage to the motorized bike is that it helps patients with limited mobility to pedal and achieve and maintain the intensity of training thought to be necessary to have an impact on brain function. It is important to note that the cycling is not passive; participants must contribute to the activity in order to exercise within their target heart rate range, he said.

Reducing disability as well as the risk factors of a recurrent stroke could yield significant public health benefits, she said. Other studies have shown aerobic exercise conditions the brain for learning, so Linder says it’s not a surprise that their results, although preliminary, suggest the same.

The study was funded by National Institute of Neurological Disorders and Stroke.

Statements and conclusions of study authors that are presented at American Heart Association scientific meetings are solely those of the study authors and do not necessarily reflect association policy or position. The association makes no representation or warranty as to their accuracy or reliability. The association receives funding primarily from individuals; foundations and corporations (including pharmaceutical, device manufacturers and other companies) also make donations and fund specific association programs and events. The association has strict policies to prevent these relationships from influencing the science content.