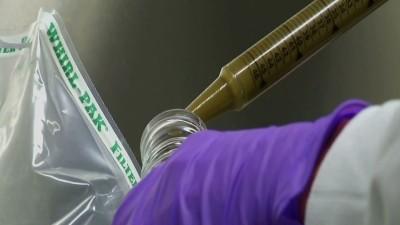 When Harlan Dorbin passed away from a rare infection one month after his successful lung transplant surgery, his surgeon turned to Dorbin’s sister and made a promise.

“I told her I would get to the bottom of this,” said Ankit Bharat, MD, a thoracic surgeon and surgical director of the Northwestern Medicine® lung transplant program. “It was a perfect operation yet this infection caused an abnormal buildup of ammonia that a person’s body can’t sustain. It’s rare but it’s almost always fatal. No one knew the cause or how to prevent it. This simply wasn’t acceptable to me.”

In 2014, there were about 2,100 lung transplant surgeries in the United States. The ailment Dorbin acquired happens in about four percent of all lung transplant recipients, said Bharat, who is also an assistant professor in thoracic surgery at the Northwestern University Feinberg School of Medicine.

After Dorbin’s death, Bharat spent the next several months researching this infection using Dorbin as a case study and testing samples from hospitals all over the county, including a donor sample from Loyola Medicine. Through his research he was able to identify a specific bacteria as a cause of this condition and also demonstrated that it can be successfully treated with antibiotics. Bharat is lead author of the multi-center study, which was published in Science Translational Medicine on April 22, 2015.

“To think this condition is treatable and perhaps even preventable is very exciting news,” Bharat said. “Further studies need to be done, but this research has already saved other patients. Other centers who had patients with this infection have reached out to us and I know of two patients who have recovered because of the antibiotics.”

For seven years, sarcoidosis gradually destroyed Dorbin’s lungs, leading to the need for a double lung transplant surgery in July 2014. Doctors believe sarcoidosis results from the body’s immune system responding to an unknown substance, most likely something inhaled from the air. Dorbin, 47, spent years working in a factory where he was exposed to chemicals. Eventually, he was dependent on a wheelchair to get around and oxygen to shower, eat and sleep. Because of his limitations, Dorbin couldn’t work or leave the house for anything other than doctor appointments at the time of his surgery.

“It was devastating to lose a patient like Harlan, especially after an otherwise perfect transplant procedure,” Bharat said. “But this research and these findings would never have been discovered without him. He has helped so many other future lung transplant patients.”

Dorbin came down with the infection almost immediately after surgery and passed away about a month later. His older sister Crystal Dorbin was one of the first people Bharat told about his research findings.

“Words can’t express how happy I was to hear this,” said Crystal Dorbin, who lives in Chicago. “Harlan never let his disease control him. He lived life to the fullest and was smiling and laughing all the time even though we knew every breath was a struggle. I think he’d be proud to know he was helping other people like him.”

Lungs are one of the most difficult organs to transplant because unlike other organs, lungs are exposed to the external atmospheric elements during normal respiration, leading to possible infection and damage. Because timing is so critical, surgeons typically have about six hours to transport lungs from a donor and transplant into the recipient. However, for lung transplant patients, their quality of life post-surgery is nothing short of remarkable. More than 80 percent of these patients go from being oxygen dependent to having minimal or no limitations on their physical activity.

“For patients with end-stage lung diseases, a lung transplant gives them not only a new set of lungs but a much better quality of life,” said Malcolm DeCamp, MD, chief of the division of thoracic surgery at Northwestern Memorial Hospital and Northwestern University Feinberg School of Medicine. “Northwestern Medicine has a premier lung transplant program because of our outstanding patient care and our clinical trials and research which uncover the new and life-saving treatments of the future.”

To learn more about the Northwestern Medicine Lung Transplant Program or to schedule an appointment, click here or call 312-695-LUNG.