A gene variant common in African-Americans predicts that people with that gene who also have chronic kidney disease (CKD) are twice as likely to progress to kidney failure as African-Americans without the high-risk gene and white people with CKD. People with the high-risk gene also tend to lose kidney function at twice the rate of those without the gene, according to the research, which was funded by the National Institutes of Health.

Investigators from the Chronic Renal Insufficiency Cohort (CRIC) Study and the African American Study of Kidney Disease and Hypertension (AASK) published joint results online today in the New England Journal of Medicine at http://www.nejm.org, which will appear in the Dec. 5, 2013 print issue.

The impact of the gene variant – known as APOL1 – on risk for and rate of CKD progression was consistent in both studies, regardless of whether patients maintained good blood pressure control or had diabetes. High blood pressure and diabetes are major risk factors for CKD and its progression to kidney failure.

“We now know that the APOL1 gene variant is independently associated with a more aggressive course of disease. This finding tells us that different treatment strategies should be studied, so that we may one day delay or prevent kidney failure among people with this genetic risk,” said Paul Kimmel, M.D., director of the Kidney Translational Genetics Program at the NIH’s National Institute of Diabetes and Digestive and Kidney Diseases (NIDDK).

“Now that the importance of the gene is known, clinicians could potentially genotype – or map the genes – of African-Americans with CKD to assess their risk for disease progression,” said Afshin Parsa, M.D., a nephrologist at the University of Maryland School of Medicine in Baltimore and a CRIC Study investigator. “This discovery provides direct evidence that African-Americans with established CKD and the APOL1 risk gene variant experience a faster decline in kidney function compared to their white counterparts, irrespective in most cases of what caused their kidney disease.”

Parsa and Linda Kao, Ph.D., a geneticist from the Johns Hopkins Bloomberg School of Public Health in Baltimore and the AASK Study Group, co-led the research.

The discovery builds on landmark 2008 research by NIH kidney specialist Dr. Jeffrey Kopp and others, led by Dr. Martin Pollak at The Laboratory of Inherited Kidney Disease at Beth Israel Deaconess Medical Center and Harvard Medical School in Boston, which found the APOL1 gene variant to be a risk factor for kidney disease that wasn’t associated with diabetes.

An estimated 20 million or more American adults have CKD, and over 400,000 people in the United States and 2 million worldwide depend on dialysis to treat kidney failure. Although exceedingly rare in white people, the APOL1 gene variant is found in 13 to15 percent of African-Americans. Some have speculated that it evolved to protect against one of the two forms of African sleeping sickness, a lethal parasitic disease transmitted by the tsetse fly. 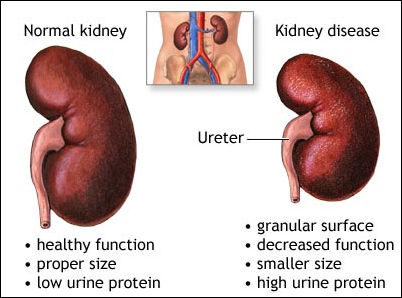 AASK is the largest and longest completed study of chronic kidney disease (CKD) in African-Americans. Beginning as a randomized clinical trial in 1995, the investigation was completed in 2007 as a cohort study.

The NIDDK, a component of the NIH, conducts and supports research on diabetes and other endocrine and metabolic diseases; digestive diseases, nutrition and obesity; and kidney, urologic and hematologic diseases. Spanning the full spectrum of medicine and afflicting people of all ages and ethnic groups, these diseases encompass some of the most common, severe and disabling conditions affecting Americans.

Bill Polglase
.(JavaScript must be enabled to view this email address)
301-496-3583
NIH/National Institute of Diabetes and Digestive and Kidney Diseases