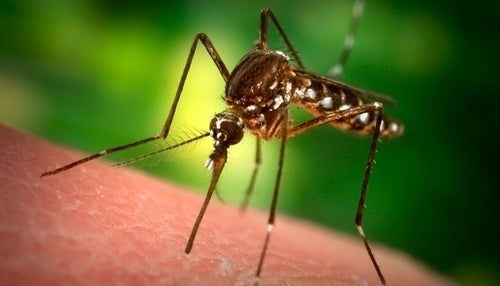 Females of the malaria-spreading mosquito tend to obtain their blood meals within human dwellings. Indeed, this mosquito, Anopheles gambiae, spends much of its adult life indoors where it is constantly exposed to human odor - from used clothing, bedding, etc. - even when people are absent.

But is human odor enough as a reliable cue for the mosquitoes in finding humans to bite?

Not quite, reports a team of entomologists at the University of California, Riverside in a research paper published online earlier this month in the Journal of Chemical Ecology. The researchers’ experiments with female Anopheles gambiae show that the mosquitoes respond very weakly to human skin odor alone. The researchers found that the mosquitoes’ landing on a source of skin odor was dramatically increased when carbon dioxide was also present, even at levels that barely exceed its background level. The researchers suggest, too, was that the mosquitoes use a “sit-and-wait” ambush strategy during which they ignore persistent human odor until a living human is present.

“Responding strongly to human skin odor alone once inside a dwelling where human odor is ubiquitous is a highly inefficient means for the mosquito of locating a feeding site,” said Ring Cardé, a distinguished professor of entomology, whose lab conducted the research.

“We already know that mosquitoes will readily fly upwind towards human skin odor but landing, the final stage of host location, which typically takes place indoors, does not occur unless a fluctuating concentration of carbon dioxide indicates that a human host is present. It may be that upwind flight towards human odor has more to do with locating a human dwelling, which emits human odor even when its occupants are absent, than locating a feeding site per se.”

Cardé explained that mosquitoes, once indoors, conserve their energy by ignoring omnipresent human odor in an unoccupied room. Small increases in carbon dioxide indicate to the mosquitoes the probable presence of a human. This then triggers the mosquitoes to land on human skin.

Why Some Mosquitoes Spread Malaria and Others Don’t

Sequencing the genomes of numerous Anopheles mosquito species from locations around the world has shown why some can carry and spread the deadly disease malaria while others don’t, researchers say.

Evolution among more than 500 different Anopheles species has left certain varieties genetically better equipped for transmitting the disease than even some close cousins, they say.

Only about 60 of those species can transmit the malaria parasite Plasmodium and infect humans, an international research team reports in the current issue of Science.

Those parasites cause an estimated 200 million cases of malaria each year, resulting in than 600,000 deaths annually.

Most of those deaths happen in sub-Saharan Africa, the home of Anopheles gambiae, the major vector species of mosquito.

Genome studies have provided insights into the way this particular mosquito species evolved, becoming highly specialized for living among and feeding on humans, while other species evolved in different ways.

Understanding the evolution behind the differences among species might lead to improvements in way to control mosquitoes to stop malaria transmission, the researchers say.

The international research team, in an attempt to understand the evolutionary differences, mounted an effort to sequence the genomes of 16 Anopheles species, all of which evolved from a common ancestor around 100 million years ago.

The findings could help in the design on new types of mosquito control. One take-home message from this work is that studies defining which human odors mediate host finding and which compounds are good repellents need to precisely control exposure to above ambient carbon dioxide - an experimenter entering an assay room quickly elevates the level of carbon dioxide and thereby alters the mosquitoes’ behavior.

The research shows that when it comes to feeding on humans indoors, malaria mosquitoes have developed a striking adaptation to how carbon dioxide affects their landing on human targets in response to skin odor.

“It also would be useful next to see if mosquitoes’ response to skin odor is similarly affected by carbon dioxide in outdoor situations and how these interactions play out in human dwellings,” Cardé said.

Larvae of Anopheles gambiae can breed in diverse habitats. This mosquito has evolved to search in human dwellings for blood meals to carry out egg production. The mosquito enters houses throughout the night, peaking around midnight and continuing at a high rate until the early morning hours. Following a blood meal, the mosquito often remains in dwellings until it is ready to lay eggs. Mosquitoes also seek refuge inside human dwellings during the day, taking shelter from high daytime temperatures outside.

Cardé, who occupies the A. M. Boyce Chair in the Department of Entomology, was joined in the study by Ben Webster (first author of the research paper) and Emerson S. Lacey.

To conduct their experiments, the researchers used Anopheles gambiae originating from mosquitoes collected in Cameroon. They collected skin odor by using pieces of white polyester gauze worn by Webster in a cotton sock for 4-6 hours before the experiments began. The landing behavior of the mosquitoes in the experiments was recorded with a video camera equipped with night vision.

Malaria, one of the most common infectious diseases in the world, is estimated to have sickened over 200 million people and killed more than 600,000 in 2012, according to the World Health Organization.

With those kinds of numbers, and the fact that the disease is present in more than half of the world’s countries, it might seem like any effort to eliminate the disease would be futile.

But an international consortium of scientists, including a Cal Poly Pomona researcher and a graduate student, may have just taken an important step in that direction. They’ve unlocked the genomes of 16 species of Anopheles mosquitoes, the only type of mosquito capable of transmitting malaria among humans.

If researchers were to discover the genes that allow some mosquitoes to transmit malaria, they might be able take that ability away with genetic engineering, Arensburger says.

“There is a drive to try and modify these mosquitoes artificially: that is, to try and genetically alter these mosquitoes so it will not be able to carry these diseases,” says Arensburger, who has also helped sequence the genome of the tsetse fly, which transmits African sleeping sickness.

Jenny McCarthy, one of Arensburger’s former students, contributed to the research and co-authored the paper outlining their findings, which was published online in November by the journal Science, one of the world’s leading scientific journals.

The research was supported by a grant from the National Institute of Allergy and Infectious Diseases awarded to Cardé and Anandasankar Ray, a colleague at UCR who was not involved in the research.

The University of California, Riverside (http://www.ucr.edu) is a doctoral research university, a living laboratory for groundbreaking exploration of issues critical to Inland Southern California, the state and communities around the world. Reflecting California’s diverse culture, UCR’s enrollment has exceeded 21,000 students. The campus opened a medical school in 2013 and has reached the heart of the Coachella Valley by way of the UCR Palm Desert Center. The campus has an annual statewide economic impact of more than $1 billion. A broadcast studio with fiber cable to the AT&T Hollywood hub is available for live or taped interviews. UCR also has ISDN for radio interviews. To learn more, call (951) UCR-NEWS.