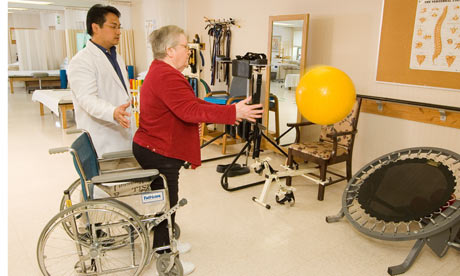 People who have had a stroke can often benefit from moderate exercise, doctors and physical therapists report.

In a scientific statement from the American Heart Association and the American Stroke Association, they write that both aerobic exercise and strength training may help stroke survivors keep up their daily activities and improve their quality of life.

Becoming more active may also lower their risk of having a heart attack or a second stroke, but that remains to be shown definitively.

“Physical activity really has to be at the base of any sort of recommendation post-stroke,” said James Rimmer, from the University of Alabama at Birmingham and the Lakeshore Foundation.

Rimmer was not involved in writing the scientific statement, but has studied the effects of exercise after stroke.

About 795,000 people in the U.S. have a stroke every year, the authors of the report note. Most of them survive, but with some stroke-related impairment. Many people who have had a stroke also have other co-occurring health problems.

Recovering after a stroke may feel like a daunting task. Among other things, your brain must relearn skills it lost when it was damaged by the stroke.

Recent research, though, shows that the brain is amazingly resilient and capable of adapting after a stroke. This means that recovery is more possible than previously thought.

Recovering use of your arm does bring special challenges, though - different than those experienced with the leg, says Susan Ryerson PT, ScD, owner of Making Progress, a physical therapy business. Ryerson has specialized in post-stroke recovery for more than 40 years with a special interest in rehab for arms.

“But you don’t have to do anything with the arm because you have the other one to use,” Ryerson says. “In the beginning, it’s easier to do things with your ‘good’ arm. So you develop a behavioral pattern of nonuse.” But because early muscle activation is critical to good recovery, you should be devoting as much time as possible to getting your arm to work, she says.

For those reasons and others - including a lack of support - stroke survivors typically don’t get much exercise, according to the statement. But being sedentary can only compound some of their symptoms, like fatigue and declining fitness.

The statement is an update to a 2004 document that also recommended people be more active after a stroke. Now, the authors are even more confident in that prescription, said Sandra A. Billinger, of the University of Kansas Medical Center in Kansas City.

She and her colleagues outline the importance of physical activity soon after a stroke and as part of a permanent lifestyle change.

Within the first 24 hours after a stroke, patients should try getting out of bed and moving around, they write. As the recovery process goes on, adding more movement will help them get back to performing daily activities. Ultimately, people who have had a stroke and are capable of exercise should aim for at least three days a week of aerobic activity, such as on a treadmill or stationary bike, and two to three days a week of resistance training.

Can too much exercise cause a stroke?

BBC presenter Andrew Marr blames his recent stroke on overworking and an overly vigorous exercise session on a rowing machine.

The 53-year-old said he had, to his detriment, believed the newspapers… that we must take very, very intensive exercise in short bursts for good health.

So should we now leave high-intensity training to only the youngest and fittest people?

People of all ages can have a stroke, although they occur most commonly in people who are older.

Most of the time there will be underlying health problems like having high blood pressure.

And there are simple lifestyle changes that you can make to reduce your risk of stroke.

These include keeping fit by doing regular exercise, maintaining a healthy weight, refraining from smoking and making sure you don’t drink too much alcohol.
man rowing Experts advise getting checked over by a GP before embarking on a new exercise regime

Doctors say that regular exercise can halve your risk of stroke. About 30 minutes of activity five days a week is enough. And you do not have to do it all in one go - it is just as effective to exercise a few times a day in 10, 15 or 20-minute sessions. But in terms of intensity, erring on the side of caution might be best.