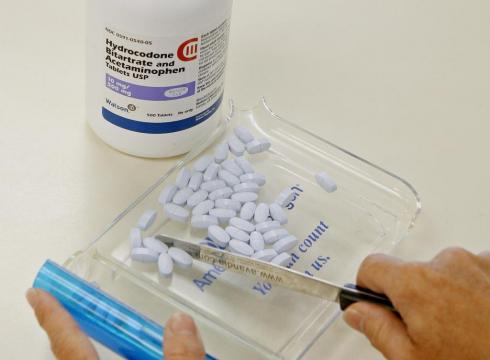 U.S. regulators on Thursday approved a painkiller overdose treatment in a portable device that will allow people without medical training to use in emergency situations, a move to combat the rise of deaths from prescription painkiller abuse and illicit drugs.

The Food and Drug Administration said it cleared a small, hand-held injector device that delivers the drug naloxone nearly three months ahead of schedule under so-called “priority review”, as painkiller drug overdose deaths increase, becoming the leading cause of mortality by injury in the United States.

The approval means emergency responders or even family members could deliver the treatment in cases of suspected overdose of opioids, which include pain drugs like oxycodone, morphine, codeine and hydrocodone as well as heroin.

More than 16,000 people die each year from prescription opioid overdose in the United States, according to the FDA and the device’s maker, privately held drugmaker kaleo Inc.

Overdoses occur among those addicted to such painkillers but can also happen accidentally in patients using them legitimately to treat pain.

The device is called Evzio and automatically delivers a set dose of naloxone, a drug ingredient already approved to treat overdose patients that works by quickly restoring breathing.

Naloxone is now typically given through a nasal spray or a syringe that must be injected under the skin or into the muscle, and has been limited to medical professionals at hospitals and emergency rooms.

The version approved Thursday is small enough to be carried in a pocket, the FDA said. Family members and caregivers would still need training and practice on how to use the device, and several doses may be needed to revive someone, the agency added.

The device will require a prescription and will be available at pharmacies this summer, the company said.

“Making this product available could save lives by facilitating earlier use of the drug in emergency situations,” Bob Rappaport, head of the FDA division that reviews such products.

FDA Commissioner Margaret Hamburg said while wider use of overdose treatment is important, “the larger goal is to reduce the need for products like these by preventing opioid addiction and abuse.”

A growing number of municipalities have stocked other naloxone treatments and have begun training firefighters, police officers and other emergency responders on how to deliver the antidote.

Separately on Thursday, New York Attorney General Eric Schneiderman said the state would equip every law enforcement officer in the state with naloxone to help fight a surge in heroin overdoses. The effort would be funded with $5 million recovered from drug traffickers.

Schneiderman cited data from police in Quincy, Massachusetts, which began requiring officers to carry naloxone in 2010. Since that time, the police department has used the drug 221 times and reversed overdoses in 95 percent of those cases.