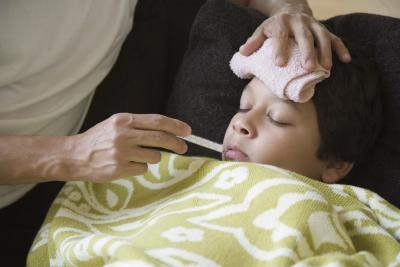 A review of past research finds that fever-reducing drugs have no effect on the speed of children’s recovery from an infection, contrary to the fears of some doctors and parents.

Researchers have debated for decades whether lowering a sick child’s fever helps the recovery process or interferes with the body’s ability to fight the infection.

Some previous research has shown that giving children fever-reducing “antipyretic” medications, such as acetaminophen, after vaccinations interfered with their immune responses to the vaccines, for example.

“There’s no evidence that antipyretics slow down recovery,” said Alison While, a professor of community nursing at King’s College London and senior author of the new study.

Nevertheless, While and her coauthor caution in their report in the Journal of Pediatrics, their findings don’t mean they encourage parents to use the medications at the first sign of fever either.

“Many many parents are using antipyretics with small children whenever they get a slightly raised temperature. This is madness,” While told Reuters Health.

Because of the ongoing debate and the fact that few researchers have examined the health benefits or harms in reducing a fever during illness, While and colleague Edward Purssell combed the literature.

They found only six clinical studies that examined the effect of using anti-fever medications on a total of 657 sick children.

Consider the cause. The influenza (flu) virus can cause fever. Infection is more likely during flu season, which runs October through April. If you suspect you have flu, consult your doctor right away. Prescription anti-flu medications work best when taken within one to two days of symptom onset.

Scan ingredient lists. In order for a medication to reduce a fever, it needs to contain an analgesic. An analgesic is a substance that relieves pain and/or inflammation. Common over-the-counter analgesics include acetaminophen, aspirin, ibuprofen, and naproxen.

Save your stomach. Acetaminophen or enterically coated (“gentle”) aspirin are better options for people prone to the stomach irritation associated with aspirin, ibuprofen, or naproxen. Keep in mind that acetaminophen may not be right for people with liver disease or abnormal liver function. If in doubt, ask your doctor.

Ask about age. Some analgesics are not safe for children and teens. Aspirin in particular should not be used in kids or teens because it can lead to a rare, life-threatening reaction called Reye’s (pronounced “rise”) syndrome. Acetaminophen often is a safer option for bringing mild fever down in kids.

Dispense with the unnecessary. If your fever is not accompanied with other symptoms, such as a cough, runny nose, or chest congestion, treat only for a fever. A single ingredient, analgesic fever reducer is the best option in these cases.

Line up labels. If you are treating for a fever plus cold or flu symptoms, make sure you don’t overdo it with any one ingredient. Read all labels carefully and compare ingredients to avoid accidentally doubling your intake of any one medication.

Ask about age again. Children can tolerate higher fevers than adults. A prolonged fever of 103°F or higher is considered serious in children and requires an immediate trip or call to the doctor. For adults, consult the doctor for fevers of 102°F or higher.

Wash it down with water. Staying hydrated is vital to at-home fever management. A fever can significantly increase your fluid needs, so have water, 100% juice, soup, or other fluids on hand to sip continuously throughout the day. Aim for at least eight eight-ounce glasses of water and other fluids per day.

Dial the doctor. When in doubt, consult your healthcare provider. Red flags that a fever may signal something more serious include trouble breathing, bluish skin color, irritability, trouble waking up, confusion, disorientation, seizures, swollen neck or jaw glands, or feeling faint. Worsening of other chronic conditions such as diabetes, continued vomiting or abdominal pain, pain or pressure in the chest, and any high fever lasting more than three days (103°F or above for kids, 102°F or above for adults) are also causes of concern.

Three of the studies focused on children infected with malaria and the rest included fevers that came from chickenpox and other viral infections.

Feverish children given anti-fever meds returned to normal body temperature four hours more quickly than those without meds, on average, but all children recovered from their respective infections with equal speed, the researchers found.

For While and other health experts, the result not only shows that antipyretics do no harm to recovery time, it also highlights parents’ quick willingness to stave off a fever, with little evidence it does any good.

“Fever-phobia - this great fear that fever is such a horrible thing for their child” drives the overuse of anti-fever meds by parents, according to Dr. Janice Sullivan, medical director of the Kosair Charities Pediatric Clinical Research Unit at the University of Louisville.

Sullivan, who was not involved in the current study, coauthored 2011 American Academy of Pediatrics recommendations to decrease use of anti-fever medicines for children.

“The bottom line is this: You never want to give your child a drug that they don’t truly need because all drugs, even if you can buy them over the counter, have a potential for side effects,” Sullivan told Reuters Health.

“They can cause injury to the liver for acetaminophen and to the kidney for ibuprofen; they’re not benign drugs,” Sullivan said.

The deciding factor in giving antipyretics is typically discomfort, Sullivan added. If children are whiny, have aches and joint pain, they may need to be treated, but otherwise, a fever temperature will limit itself and won’t require treatment, Sullivan said.

She recommended that parents talk with their pediatricians about what symptoms beyond fever should be of concern and may warrant a doctor’s visit.

For example, a child with a weakened heart won’t do well with a fever and could benefit from anti-fever meds.

Another expert went further, saying that anti-fever meds had no place in a medicine cabinet.

“A true fever, caused by an infectious agent is never harmful; there’s no reason why one should lower the temperature during infection,” said Dr. Peter Kremsner, head of the Institute of Tropical Medicine at the University of Tübingen in Germany, and an author of three malaria studies included in the analysis.

One common worry among parents is that a high fever could overwhelm a child’s body and lead to convulsions.

Kremsner said no evidence suggested that convulsions from fever existed. “It is always the infectious disease,” he told Reuters Health.