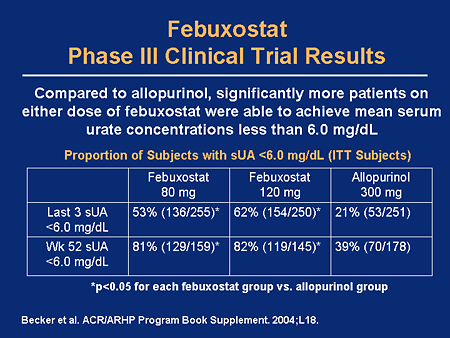 The 2012 American College of Rheumatology gout treatment guidelines recommend titration of urate-lowering medication doses to achieve target serum uric acid (sUA) levels of less than 6 mg/dL. Analysis of data from a large US managed care cohort showed that at commonly used doses, febuxostat was more effective than allopurinol at reducing sUA to target levels. The researchers suggest this was probably at least partly because the commonly used allopurinol doses were not selected by dose titration, and were almost certainly too low.

Jasvinder A. Singh, MD, professor of medicine, University of Alabama, Birmingham, and colleagues reported the results of their retrospective analysis, which was funded by Takeda, in an article published online May 12 in Arthritis Research & Therapy.

The researchers conducted a retrospective study of medical and pharmacy claims and laboratory data from a large US commercial and a Medicare Advantage health plan during 2009 to 2011. The study included all patients with at least one medical claim and a diagnosis of gout who had received at least one prescription for febuxostat (n = 2015) or allopurinol (n = 14,025) and who had at least one sUA measurement after that prescription.

Tuhina Neogi, MD, PhD, associate professor of medicine and epidemiology, Boston University School of Medicine, Massachusetts, told Medscape Medical News, "It's well-known that about half of patients with gout do not achieve adequate control of their gout if their allopurinol dose is at 300 mg or lower. If a low percentage of patients in this study had a dose higher than 300 mg of allopurinol, that would be a legitimate concern." Dr Neogi is involved in other, non-industry-funded gout treatment studies, and was not involved in this study.

"We now know that that 300-mg dose is effective for less than half of the patients treated. We need to do something about this through education, especially concerning community practice,” Dr Singh said. He suggested that much of the allopurinol underdosing problem results from a combination of habit; the challenge of dealing with patients who have multiple comorbidities such as hypertension, diabetes, heart disease, or chronic obstructive pulmonary disease in addition to gout; and excessive concern about renal adverse effects.

According to Dr Singh, a major barrier is that most rheumatologists believe in treat-to-target and in titration of urate-lowering drugs, but many primary care physicians have not yet bought into that concept. “Since 80% of gout care worldwide is done by primary care practitioners, if anything is going to improve change in gout outcomes, that is where the change must begin,” he said.

Dr Singh also noted that the clinician treating a patient who has multiple comorbidities tends to take absence of reporting of gout flares as an indicator of absence of disease.

Some of the concern about renal effect might be a result of overgeneralization from a 1984 study by Hande et al ( Am J Med. 1984;76:47-56) of allopurinol toxicity in patients with renal insufficiency. According to Dr Singh, a better approach in patients with renal insufficiency is to start allopurinol at a lower dose and to titrate more gradually, perhaps to 600 mg/day. Dr Singh said, “That might produce the same result as a dose of 900 mg/day in a patient with normal kidney function.”

Dr Singh also would like to see a febuxostat-allopurinol comparative study in patients with moderate renal insufficiency and creatinine between 1.5 and 2.5 mg/dL, to see whether one drug is safer and/or more effective than the other. Finally, Dr Singh suggested that a study examining whether closely monitoring and tightly controlling sUA levels would affect outcomes including gout symptoms, kidney function, quality of life, function, productivity, and healthcare costs.

“The question is, what would be the benefit of that approach vs the usual set-and-forget dosing approach?” Dr Singh said. “That would need to be a very large prospective study, but could be observational.”

The study was funded by Takeda Pharmaceuticals International, Inc. Dr Singh has received research grants from Takeda and Savient and consultant fees from Savient, Takeda, Regeneron, and Allergan. One coauthor is an employee of Takeda Pharmaceuticals International, Inc. Another coauthor was employed by Takeda at the time the research was conducted. Dr Neogi has disclosed no relevant financial relationships.