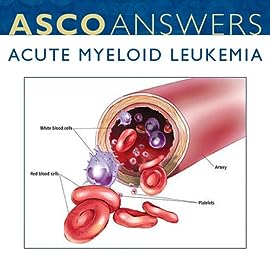 Currently, doctors use chromosome markers and gene mutations to determine the best treatment for a patient with acute myeloid leukemia (AML). But a new study suggests that a score based on seven mutated genes and the epigenetic changes that the researchers discovered were present might help guide treatment by identifying novel subsets of patients.

The epigenetic change used in the study is DNA methylation. It involves the addition of methyl groups to DNA, which can reduce or silence a gene’s activity, or expression. Abnormal DNA methylation alters normal gene expression and often plays an important role in cancer development.

These statistics about leukemia and acute myeloid leukemia (AML) are from the American Cancer Society:

The average age of a person with AML is about 67.

AML is a little more common in men than in women.

“Epigenetic changes that affect gene expression have not been considered. Here we show that epigenetic changes in previously recognized and prognostically important mutated genes can identify novel patient subgroups, which might better help guide therapy,” says Bloomfield, who is also the William Greenville Pace III Endowed Chair in Cancer Research at Ohio State.

In this study, researchers developed a seven-gene scoring system for AML cells that is based on gene mutations and a second type of gene modification called an epigenetic change.

The findings suggest that this scoring system can help doctors determine the best treatment for AML patients.

The seven-gene panel was identified in 134 patients aged 60 and older with cytogenetically normal acute myeloid leukemia (CN-AML) who had been treated on Cancer and Leukemia Group B (CALGB)/Alliance clinical trials.

What Is Acute Myeloid Leukemia?

Acute myeloid leukemia starts in the bone marrow. This is the soft inner parts of bones. With acute types of leukemia such as AML, bone marrow cells don’t mature the way they’re supposed to. These immature cells, often called blast cells, just keep building up.

You may hear other names for acute myeloid leukemia. Doctors may call it:

Without treatment, AML can quickly be fatal. Because it’s “acute,” this type of leukemia can spread quickly to the blood and to other parts of the body such as the following organs:

The expected outcome for acute myeloid leukemia depends on certain factors. And of course prognosis is better if your leukemia responds well to treatment. Your outlook is better if: 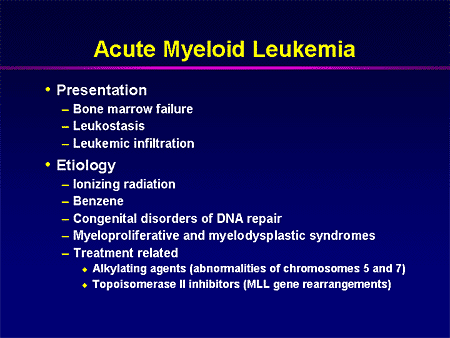 Most adults with AML are not cured by current therapies. Only about 40 percent of patients younger than age 60 and about 10 percent of patients 60 and older are alive after three years, so new strategies for treating the disease and for matching the right patient with the right treatment are needed, Bloomfield says.

For this study, Bloomfield, Marcucci and their colleagues used next-generation sequencing to analyze regions of methylated DNA associated with prognostically important gene mutations in CN-AML cells from 134 patients aged 60 and older.

The seven genes identified by the researchers were CD34, RHOC, SCRN1, F2RL1, FAM92A1, MIR155HG and VWA8. For each of these genes, lower expression and higher DNA methylation were associated with better outcome.  A summary score was developed based on the number of genes in the panel showing high expression. The researchers validated the score in four sets of patients: older and younger patients with primary AML, and older and younger patients with CN-AML (355 patients total).

When Bloomfield, Marcucci and their collaborators applied the unweighted score to the initial training set of 134 older patients, those with one or no highly expressed genes had a 96 percent complete-remission rate, 32 percent three-year disease-free survival rate and 39 percent three-year overall survival.

“Overall, our findings suggest that the unweighted-summary score is a better model compared with all other prognostic markers and previously reported gene-expression profiles,” Bloomfield says.

The Ohio State University Comprehensive Cancer Center - Arthur G. James Cancer Hospital and Richard J. Solove Research Institute strives to create a cancer-free world by integrating scientific research with excellence in education and patient-centered care, a strategy that leads to better methods of prevention, detection and treatment. Ohio State is one of only 41 National Cancer Institute (NCI)-designated Comprehensive Cancer Centers and one of only four centers funded by the NCI to conduct both phase I and phase II clinical trials. The NCI recently rated Ohio State’s cancer program as “exceptional,” the highest rating given by NCI survey teams. As the cancer program’s 228-bed adult patient-care component, The James is a “Top Hospital” as named by the Leapfrog Group and one of the top cancer hospitals in the nation as ranked by U.S.News & World Report.