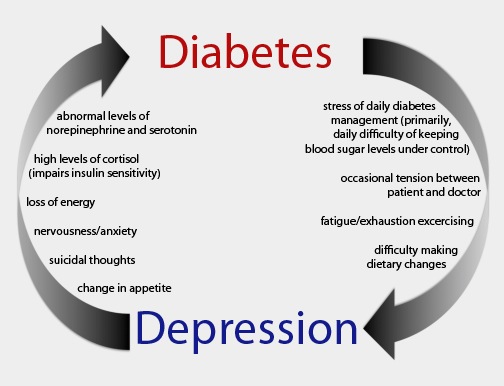 In a study of middle-aged and older people with type 2 diabetes, declines in thinking and memory that are often linked to later dementia happened faster in those who were depressed compared to those who were not.

Over less than four years, U.S. and Canadian researchers saw significant differences between depressed and non-depressed diabetes patients in the erosion of a wide range of cognitive abilities.

“Depression appears to be an important risk factor for dementia and cognitive decline among patients with diabetes,” Dr. Mark Sullivan, professor of psychiatry at the University of Washington and lead author of the study, told Reuters Health in an email.

Both diabetes and depression have been found to raise the risk of Alzheimer’s disease and other forms of dementia later in life. But whether depression is a cause or an effect of cognitive decline remains unclear.

Diabetes can damage organs, especially the kidneys, eyes, nervous system and brain. The disease also raises a person’s risk for having a cardiovascular “event” such as a heart attack or stroke.

More than one-quarter of Americans older than age 65 have diabetes, according to the Centers for Disease Control and Prevention. An estimated 6.5 million Americans in this age group suffer from depression, according to the National Alliance for Mental Illness.

To assess the role of depression in cognitive decline among older diabetes patients, Sullivan’s team looked at data on nearly 3,000 people over age 55 with type 2 diabetes and risk factors for cardiovascular events. On average, participants had had diabetes for about 9 years.

Tests of cognitive abilities were given to all participants at the study’s beginning, and again at 20 months and 40 months. One test measured psychomotor speed, or how long it takes the brain to register a stimulus, process it and respond. Another looked at the ability to remember words over time. A third test measured executive functioning, or how the brain uses memories to plan actions, pay attention and inhibit inappropriate behavior.

Researchers determined whether an individual was depressed using a 9-question form patients filled out themselves.

More than 2,600 people completed the tests at all three time points. Sixty-two percent of these never had scores indicating depression. Eighteen percent were depressed at the start of the study, 16 to 17 percent were depressed at 20 and 40 months and five percent had scores indicating depression at all three time points. 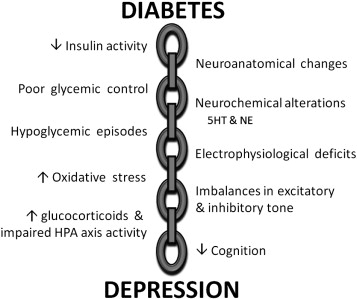 Researchers found that people with symptoms of depression at any point were more likely to be women, younger, non-Hispanic whites, overweight or obese, and to have higher blood sugar, total cholesterol and low-density lipoprotein, or “bad” cholesterol, than others.

Yet, the researchers report in JAMA Psychiatry, depression was linked to greater cognitive decline regardless of other risk factors. These included age, gender, race, obesity, smoking, alcohol use, previous cardiovascular events, as well the types of diabetes and heart disease medications the participants were taking.

“This study demonstrates that depression accelerates cognitive decline in patients with diabetes, over a short time frame, in all patient subgroups, and in all cognitive domains assessed,” Sullivan said.

“Whether depression treatment will reverse this effect remains to be tested in a separate randomized trial,” he said.

“The broad range of cognitive tests used indicates widespread cognitive problems in performance, memory and speed of task completion,” said Dr. Mark Nathanson, director of the geriatric psychiatry fellowship at Columbia College of Physicians and Surgeons in New York, who was not involved in the study.

He and Sullivan both cautioned, however, that the role of depression in cognitive decline may be complex.

Depression itself is associated with increases in stress hormones, inflammation and other processes that could directly contribute to cognitive decline, Sullivan said. But the array of other diseases that often go along with diabetes may also harm cognition and promote depression.

People with diabetes are at higher risk for vascular dementia, for example, which develops when blood supply to parts of the brain is cut off, often during a series of unnoticed “mini-strokes” that cause brain cells to die. Depression might be an early symptom of vascular disease in the brain, which later develops into dementia.

“My clinical experience is that dementing illness like Alzheimer’s disease and vascular dementia commonly present to the primary care clinician and mental health professional with depressive symptoms,” Nathanson, who is also a clinical assistant professor of psychiatry, wrote in an email.

Vascular dementia is different from Alzheimer’s disease, which causes the majority of dementia cases in the U.S. and forms characteristic plaques in the brain.

One implication of this study, Nathanson said, is that primary care physicians would do well to pay attention to and treat depression in people with chronic illnesses like diabetes.

Conclusions and Relevance  Depression in patients with type 2 diabetes was associated with greater cognitive decline in all domains, across all treatment arms, and in all participant subgroups assessed. Future randomized trials will be necessary to determine if depression treatment can lower the risk of cognitive decline in patients with diabetes.