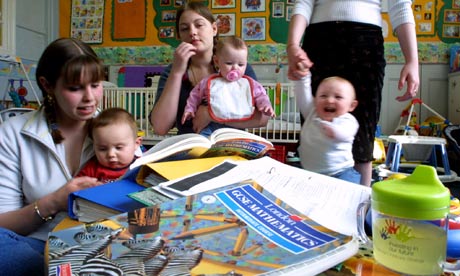 Although the number of children born to teenage parents has decreased since the 1990s, these children continue to be at an increased risk for injury, both accidental and intentional. This may be because many of these teenage parents are poor, uneducated, and lack parental safety and supervision skills. In a new study scheduled for publication in The Journal of Pediatrics, researchers analyzed the types of injuries to children of teenage parents.

Brian D. Robertson, PhD, and colleagues from UT Southwestern Medical Center and Children’s Medical Center evaluated the medical records of children of teenage parents seen in the emergency department from 2009 to 2011. A total of 764 patients under the age of 7 years were included in the final analysis. Falls and ingested objects were the most common mechanisms of injury (45% and 9%, respectively), and bruising/skin marks and fractures were the most common injuries sustained (49% and 17%, respectively).

The number of dislocations, all of which were nursemaid’s elbow (pulling on an outstretched arm or picking up by means other than under the arms), increased from 4% to 7.7% during the study timeframe. Head injuries increased from less than 1% to 5.6%. Although 93% of injuries were unintentional or likely unintentional, those cases that were intentional had higher percentages of admissions, fatalities, head traumas, and multiple injuries. Most of the children (87%) were seen in the emergency department; 77% of the children were evaluated and discharged home.

Despite the reported increased risks for intentional injury, child abuse, and general medical problems in children of teenage parents, this study reports that a majority of children were treated for unintentional injuries.

Falls are one of the leading causes of injury to children in the United States. According to Dr. Robertson, “Injury prevention efforts for teenage parents should be devoted to preventing falls and foreign body ingestions.” Programs should strive to help teenage parents proactively improve home safety (identify injury hazards and risks) and improve parental supervision skills.