First Lady Michelle Obama unveiled her “Let’s Move” campaign against childhood obesity on February 9, 2010. The program’s main antiobesity strategies are empowering parents and consumers by revamping the nutritional labeling of products by the U.S. Department of Agriculture (USDA), improving the nutritional standards of the National School Lunch Program, increasing children’s opportunities for physical activity, and improving access to high-quality foods in all U.S. communities (http://www.letsmove.gov).

This innovative multifactorial approach has potential for altering the course of the childhood obesity crisis — changing our country’s approach to eating, nutrition, and physical activity by simultaneously targeting individuals, neighborhoods, and larger communities. Current data on obesity in school-age children are sobering. Almost one third of U.S. children over 2 years of age are already overweight or obese, according to the 2007–2008 National Health and Nutrition Examination Survey (see graph), and among low-income children 2 to 5 years of age who are enrolled in federally funded health programs, the proportions range as high as 39% (see map, and the interactive map available with the full text of this article at NEJM.org).

But systematic reviews indicate that, at best, behavioral and nutrition interventions in schools or within the home have limited success in preventing weight gain in children. At as early as 3 years of age, obese children have elevated levels of inflammatory markers that have been linked to heart disease that is manifested later in life. To be a truly comprehensive and successful program, then, the Let’s Move campaign must stimulate prevention efforts targeting the youngest Americans — those under 2 years of age and preschoolers. Indeed, prevention must start as early as possible, since school-age children already have an unacceptably high prevalence of obesity and associated medical conditions.

Factors associated with increased risk for overweight or obesity in infancy and early childhood include excessive maternal weight gain or smoking during gestation, shorter-than-recommended duration of breast-feeding, and suboptimal amounts of sleep during infancy. Such exposures during early development program a person’s long-term regulation of energy balance and may have epigenetic effects. These exposures probably influence the development of hypothalamic circuits that regulate body weight, as well as endocrine pancreatic function, changes in the proportion of lean versus fat body mass, and other cycles of metabolic programming.

Interventions designed to reduce excessive weight gain and smoking during pregnancy, to increase the duration of breast-feeding, and to increase sleep duration during infancy could target U.S. children before they became overweight or obese, intervening in the cycle of metabolic programming that can be influenced by these early-life exposures. We believe that these types of interventions are crucial to include in a comprehensive obesity-prevention effort, since they affect a child’s lifetime risk of obesity.

Prevalence of Overweight and Obesity among U.S. Children 2 to 5 Years of Age, According to Ethnic Group.

Studies have shown that early interventions can potentially prevent the development of obesity in school-age children, along with associated health conditions. Wrotniak and colleagues found that the risk of having a child who was overweight at 7 years of age was 48% higher among women who gained more weight during pregnancy than recommended in the Institute of Medicine (IOM) guidelines than among women whose weight gain was within the recommended range. The World Health Organization has affirmed that the long-term benefits of breast-feeding include reduced risks of obesity and consequent type 2 diabetes mellitus, as well as lower blood pressures and total cholesterol levels in adulthood.

Ongoing public health campaigns are already addressing some of these issues, including programs aimed at reducing smoking rates and programs that attempt to increase the proportion of mothers who initiate breast-feeding and extend the period of breast-feeding. For example, the U.S. Preventive Services Task Force encourages health care professionals to inform all pregnant women about tobacco use and to provide pregnancy-tailored counseling for those who smoke. However, the Centers for Disease Control and Prevention (CDC) estimates that 14.1% of U.S. women smoke during pregnancy, suggesting that current interventions are as yet inadequate to achieve the Healthy People 2010 goal of 1% of women smoking during pregnancy. Similarly, within the U.S. subgroups of black, adolescent, and single mothers, among others, whose children are at increased risk for obesity, rates of breast-feeding exclusively at 3 months of age are under 20% — much lower than the Healthy People 2010 target of 60%. 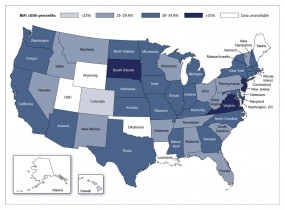 Prevalence of Overweight and Obesity among Low-Income U.S. Children 2 to 5 Years of Age Who Are Enrolled in Federally Funded Health Programs.

Overweight is defined as a body-mass index (BMI, the weight in kilograms divided by the square of the height in meters) at the 85th to less than the 95th percentile for age. Obesity is defined as a BMI at or above the 95th percentile. Data are from the Centers for Disease Control and Prevention (CDC) 2008 Pediatric and Pregnancy Nutrition Surveillance Systems (program-based surveillance systems that monitor the nutritional status of low-income infants, children, and women in federally funded maternal and child health programs). Data are based on BMI percentiles for children 2 years of age or older from CDC growth charts from 2000. The Ohio data are from the Ohio Department of Health’s Women, Infants, and Children division; the prevalence according to the Ohio Department of Health’s Bureau of Child and Family Health Services is higher (33.1%).

Efforts are also being made to address the problem of excessive weight gain during pregnancy. In 2009, the IOM issued new weight-gain guidelines for pregnant women, in which it recommended a new limit on weight gain for obese women. These recommendations were, in part, a response to data for 2006 in the CDC National Vital Statistics Report, which showed that 21% of pregnant women had gained more than 40 lb (about 18 kg) each — more than the recommended amount for women in any prepregnancy weight category. The Let’s Move campaign could synchronize its efforts more directly with these existing campaigns and try to ensure that the IOM recommendations are more widely known and followed by pregnant women.

The Let’s Move campaign may well help to improve the health of Americans through its multilevel and comprehensive approach. But pregnant women, infants, and pre–school-age children could benefit from being more explicitly incorporated into the campaign. We believe that including prevention efforts for these groups will have the longest-term effect on the obesity epidemic in the United States. As a start, the Let’s Move Web site links to the USDA’s MyPyramid Plan for Moms (http://www.mypyramid.gov/mypyramidmoms/pyramidmoms_plan.aspx) and to CDC material on the relationship between breast-feeding and overweight. Important additional components could involve support for programs that encourage health care professionals to counsel patients about the IOM’s recommendations regarding weight gain during pregnancy, that ensure pregnancy-tailored counseling for all women who smoke, that make breast-feeding easier for working mothers, and that promote healthy eating behaviors as foods are introduced to infants and toddlers. By directly emphasizing the potential risks for lifetime obesity that present in infancy and early childhood and providing the structure and direction for interventions in these areas, the campaign could increase its overall impact on reversing the childhood obesity epidemic.

Disclosure forms provided by the authors are available with the full text of this article at NEJM.org.