In the summer, Danielle Puckett swims and walks her dog around her Susquehanna Twp. neighborhood. When the weather turns cold, she just wants to hibernate.

“In the winter, I lose my energy, and I don’t want to exercise,” said Danielle, who, at 385 pounds, knows she has to combine exercise with healthy eating to combat her weight problem.

Her doctor, Ronald Williams, directs Penn State Milton S. Hershey’s Pediatric Multidisciplinary Weight Management Program, and his advice to her on what to do for exercise is simple: “Anything that gets your heart pumping.”

But doing it can be a challenge.

“I know I’ve got to try to do it,” Danielle said. “I have to basically tell myself I’ll find a way.” 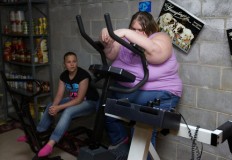 It doesn’t help that Danielle gets out of breath easily, has trouble bending over and gets pain in her lower back when she walks too far. One reason Danielle likes to swim is that she feels lighter in the water.

“Motivating Danielle to exercise is very hard,” said her mother, Dawn Keller, who is worried about her daughter’s high blood pressure. “I’m constantly trying to get her to do more.”

Danielle, who will graduate from Susquehanna Twp. High School this spring, has completed all her credits, so she no longer attends classes, which means no more gym class.

Keller, who reports her own weight at 260 pounds, tries to exercise with her daughter. They take walks together and ride bikes in nice weather. Actually, Danielle’s inactivity isn’t that unusual. Behavioral risk surveys have found that only 38 percent of Pennsylvania children are engaging in the recommended one hour per day of physical activity, according to state Secretary of Health Everette James.

Yet with statistics showing that one-third of Pennsylvania children are overweight: “You cannot afford not to find that hour,” James said.

Dr. James Mosher, a pediatrician with Jones, Daly, Coldren Associates in Camp Hill, said he often hears parents lamenting that they try to change their child’s exercise habits, but it’s not working.

“I’ll ask them: What is the one thing that’s holding you back the most?” he said. “If it’s video games, I’ll ask them to commit to cutting back one half-hour a day, and I’ll involve them in picking the activity they’ll do instead. Could they do Wii Fit or just go for a walk?” Mosher said he will acknowledge any genetic factors that might account for a child’s weight issues. But, “it doesn’t change the fact that if you remain obese, you will have health problems. We can make a dent in it.”

In an effort to do that, Highmark Inc. four years ago began covering two additional preventive office visits per year and two annual nutrition counseling visits specifically for obesity for children with a BMI (body mass index) of the 85th percentile or higher. Those with a BMI in the 95th percentile, which is considered obese, are also covered for certain laboratory studies, including a lipid profile and hemoglobin. Capital BlueCross has also expanded nutritional counseling benefits for overweight children and adults in many of its insurance contracts.

“Our data tells us that these kids represent the first generation of children who would live shorter, sicker lives than their parents,” said Dr. Robert Muscalus, senior medical director at Highmark. “By expanding our coverage to more preventive services, it sends a very strong message that we believe there is great value in interventions begun early in life. There’s also a certain level of accountability if follow-up visits are scheduled.”

Kendra Ferguson, a certified personal trainer, said the key to motivating children to exercise is to make it fun so it doesn’t seem like a chore.

“I encourage kids to get back to basics. Kids today have stopped riding bikes, playing kickball and running around outside,” said Ferguson, who addresses exercise with kids in PinnacleHealth’s KidShape program.

Ferguson encourages kids to jump rope, run around the yard or up and down steps and even do jumping jacks during TV commercials. In the winter, sledding and shoveling snow can be great exercise alternatives, she said.

For children who are obese and might have physical limitations, she suggests walking as a safe exercise.

“People think they have to do 30 to 60 minutes of hard aerobic exercise or nothing, but that’s not so. Start out with 15 minutes of moving; that’s better than 15 minutes of sitting,” she said. “Moving more is not a chore; that’s my motto.”

Williams agreed, “You can’t tell a person who is completely out of shape to work out vigorously for an hour. They can’t do it. So I say, start out walking to get your heart rate up.” Then, in addition to one hour of moderate physical activity like walking, Williams adds two minutes of inside, intense activity daily for seven days — things like dancing to music, doing an exercise video or riding a stationary bike. He increases the time by 30 seconds daily each week to slowly build up endurance and confidence.

The YMCA also offers Fit for Life, a program for overweight and obese kids ages 6 to 14. Here, the children work out in the youth fitness center, swim in the pool and even do some yoga while their parents learn about nutrition in separate parent sessions.

“We do a pre-assessment and post-assessment, and we’re averaging a full point in decrease in BMI,” Erhard said. “The best part is the kids love it, and they’re having fun without even realizing the benefit they’re getting.”

Be vigilant and patient, and efforts will pay off, experts said.

Because Danielle, who just turned 19, is making some effort to exercise and eat better, her weight has remained stable for the past year and a half — a victory in itself.

Programs to help get your kids fit and healthy:

* Join KidShape, a program run by PinnacleHealth System that is aimed at promoting healthy food choices and active lifestyles for children and their families. To participate, children must be 6 to 14 with a BMI in the 85th to 95th percentile for their age. Call 231-8900 for registration information.

* The Youth NutriFMT Program is being offered four times this summer at the Friendship Center in Lower Paxton Twp. The program is designed to help young adults improve their overall fitness and health by providing strength, flexibility and balance training and nutritional knowledge. Offered through Montgomery Wheel of Life & Build Better Health, Fitness and Wellness Specialists. Sessions are June 14-17, June 21-24, Aug. 16-19 and Aug. 23-26. Registration and information: 657-5656.

* Your municipality’s parks and recreation department or community center likely offers many activities.

—
By Body and Mind staff