GERMAN boffins have poured scorn on the medical profession’s yardstick for judging obesity saying the Body Mass Index is not the pathfinder to disease it has always been claimed.
Experts at the Ludwig-Maximilian-University in Munich now say the BMI - which divides mankind into under, normal and over-eight types and is used to determine whether individuals would run higher risk of cancers or cardiac problems as a result - is largely redundant.
Harald Schneider, who led the research team at the world renowned institute, said; “Put simply, the BMI is unsuitable for such a task. The BMI plays no role whatsoever in predicting strokes, heart attacks or other death-risks of individuals.”

Schneider and his team said a much more effective tool would be to divide a person’s waist size by their body size, arguing that is is not the quantity of fat but its overall distribution in the body that is “crucial” for being a pathfinder to certain diseases.
The BMI or Quetelet index is a statistical measure which compares a person’s weight and height. Though it does not actually measure the percentage of body fat, it is used to estimate a healthy body weight based on a person’s height. Due to its ease of measurement and calculation, it is the most widely used diagnostic tool to identify weight problems within a population with mass index defined as the individual’s body weight divided by the square of his or her height. 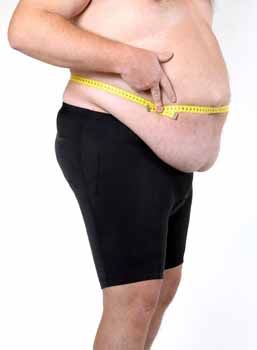 “Fat within the waist range can deliver harmful fatty acids and various chemical messengers into the body which can cause inflammations and lead to other problems,” said Schneider, saying the WHR - waist to hip ratio - is far more effective.
He also said that there is both “good” and “bad” fat within the body and it is no-ones interest to try to shed it all for the sake of vanity or perceived health benefits. ‘Good’ fat lies on a person’s hips, thighs and behind while ‘bad’ fat lies around the waist, affects the metabolism, triggers hypertension, high blood sugar and fat levels. The good fat, he says, does not lead to circulation or heart problems and may even act as a
preventor against them.
Eleven thousand guinea pigs took part in the study that spanned two periods - one of four years and one of eight and-a-half years. “So I say again; distribution of fat, not the fat itself, is the key,” added Schneider,
saying they found a categoric link between waist sizes and ill health.
The usual suspects are to blame, he said; too much butter, animal fats and saturated fats in diets.
The study will be published in the April edition of the ‘Journal of Clinical Endocrinology & Metabolism.