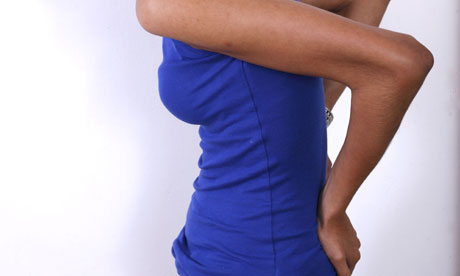 Some say that back pain is the price we pay for walking upright. Others claim that the problem of back pain only really started when humankind sat down to reflect and contemplate: a lack of exercise weakens the muscles, which is compounded with stress in our private lives or the workplace. Humans run through life hunched over with worry and the back muscles cramp up more and more. The upshot of it all: backache.

Usually, the problem can be remedied by relaxing and strengthening the back muscles. In one in seven cases, however, this doesn’t work. Even giving these patients opiates no longer helps. In these instances, a mechanical problem lurks behind the back pain and only an operation can put an end to the suffering. In severe cases, the defective vertebrae or spinal disks are bridged with a metal construction (intervertebral fusion). The fixed segment ossifies and is unable to trigger any more pain. However, this kind of reparatory operation only offers the patients a few years of relief before the problem flares up again in the neighboring vertebrae. The question is why this occurs and how this could be prevented.

A question suited for mechanical engineers
Bernhard Weisse and his team at Empa are investigating precisely these mechanical questions. In order to understand why and how quickly a vertebral joint wears out, the researchers need to know the forces that are exerted in this area. This in turn requires an exact understanding of the shape, elasticity and flexibility of the individual “elements”. It is a question for mechanical engineers, much like in bridge building, ship construction or the development of chassis components for cars.

The first step for the Empa team was to tweak the theoretical foundation: They fed the computer program “OpenSim”, a widely used simulation program for the human musculoskeletal system developed by the “National Center for Simulation in Rehabilitation Research” at Stanford University, with geometric spinal column data from 81 patients. The aim was to illustrate the biomechanics of the spinal column as accurately as possible in this computer simulation: does a spinal disk behave like a ball-and-socket joint? Or more like a rubber bearing? What influence do the muscles have? Does the rubber bearing always remain uniformly rigid or does the rigidity change depending on the angle of the curvature? Empa collaborated with the Laboratory for Orthopedic Biomechanics at Balgrist University Hospital (University of Zurich) and the Institute for Biomechanics at ETH Zurich to find the answers.

With the aid of the computer model, the scientists managed to simulate the mechanics - which is how they came closer to identifying a misalignment of the spinal column as one of the causes of increased risk of a relapse in certain patients. If these persons bends forwards to lift a load, the intervertebral joints are strained up to 34 percent more. If a spinal disk breaks and is bridged, the strain on the neighboring vertebrae carries on increasing and can be up to 45 percent higher than in healthy people. No wonder the level of wear and tear rises rapidly.

Studying a health problem using computer analysis alone is insufficient, though. The ultimate goal is to make an individual diagnosis for every patient and then recommend the appropriate therapy. As a result, Weisse’s team teamed up with US-scientists and received funding from the Swiss National Science Foundation (SNSF).

Researchers from the University of Pittsburgh developed a novel 3D X-ray video system called “Digital Stereo-X-Ray Imaging” (DSX). It can display the movement of the spinal column with 250 images per second, while the position of the vertebrae is visible down to an accuracy of 0.2 millimeters. The trick: the blurred X-ray images of the movement are combined with sharp CT images of the patient lying still on the computer.

One of the researchers who worked in Pittsburgh is Ameet Aiyangar. Having already been at Empa as a visiting scientist in 2009, he is now returning to Empa. In the US, he had 12 healthy people lift weights and produced high-resolution films of their spinal column movements. Aiyangar is currently in the process of matching the dynamic X-ray data recorded with the computer models of the individual test subjects.

Once the model for healthy people is consistent, the researchers want to use the method to study the problems associated with arthrodesis. The idea is to film the patient with the DSX system before and after the operation and analyze the alteration in this distribution of forces due to the arthrodesis. This study will help to understand the degeneration of vertebral joints much better and identify the source of pain in the lower back more accurately.

In future, this kind of computer analysis could be used for all patients who shall undergo back surgery. Doctors can decide more easily for which patients a bridging operation is advisable and for whom not.