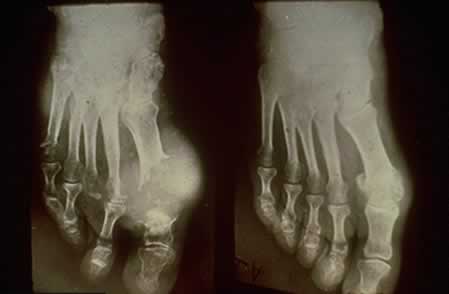 Bad news for gout sufferers who enjoy drinking the fruit of the vine - new research finds that all types of alcohol, even previously exempt wine, can bring on attacks of the painful condition.

“I don’t want to sound too dogmatic and say, ‘You must stop drinking,’” lead author Dr. Tuhina Neogi told Reuters Health. But, the Boston University rheumatologist said, “based on this study, I would counsel patients that any type of alcohol may trigger an attack.”

“It’s not just beer or hard liquor that can trigger attacks, but also wine,” she said.

Gout is a potentially debilitating form of arthritis that afflicts more than 8 million American adults, and the number is rising, Neogi’s team writes in The American Journal of Medicine.

The so-called disease of kings causes joints to swell and redden. It most often strikes overweight men’s big toes but also claims feet, ankles, knees, hands and wrists. A link between intoxicating beverages and gout has been suspected since ancient times.

A 2004 landmark study of more than 47,000 men found that drinking beer and hard liquor - but not wine - increased the risk of developing gout.

Neither has wine been shown in other studies to bring on attacks in people who already have gout, the way beer and liquor have.

Nonetheless, Neogi said, some of her patients report “they can’t even sniff wine without having a gout attack.”

To investigate the effects of all types of alcohol on the short-term risk of a gout flare-up, Neogi and her team examined survey responses from 724 adults with gout, 78 percent of them men, from across the United States between 2003 and 2012.

The more alcohol they drank, Neogi’s team found, the greater their risk of having a gout attack within 24 hours.

A five-ounce glass of wine, a 12-ounce beer or up to 1.5 ounces of liquor were considered one drink.

The researchers compared the study participants to themselves on days when they had no alcohol.

When participants had a single drink, the risk of gout attack didn’t change much. But with one to two drinks in a 24-hour period, the risk of a gout attack rose by 36 percent. With two to four drinks, the risk rose by 50 percent.

Wine was one of the worst triggers, at least for men. Regularly drinking a glass or two of wine hiked the odds of recurrent attacks by 138 percent, and drinking two to four servings of beer raised the risk by 75 percent.

“Moderate drinking,” which is one drink for women and two drinks for men, did not significantly raise women’s risk, but there were too few women in the study to estimate the effect, the researchers note.

Wine may not have raised the risk of developing gout in past studies for a variety of reasons, Neogi’s team points out in their report. People who drink only wine tend to have healthier diets and lifestyles, overall, than people who drink only beer, for example.

“They’re making healthier food choices, exercising more and not smoking as much as beer and hard liquor drinkers,” Neogi said. That may have masked wine’s effect on gout in the 2004 study.

Dr. Gary Curhan of Harvard Medical School, senior author of that study, told Reuters Health in an email, “I do think that doctors should advise their patients with gout to minimize their alcohol intake.”

Because his study controlled for diet, Curhan discounted the notion that wine drinkers’ healthier lifestyles explained differences between his and Neogi’s results.

Though Curhan’s study considered some food categories associated with gout, such as meats and seafood, it failed to include other categories, such as processed foods, or other lifestyle factors, like exercise and smoking, Neogi said.

“It just may be that without accounting for these other factors, we can’t see the true effects of wine,” she said.

Although beer and liquor have been associated with risk of incident gout, wine has not. Yet anecdotally, wine is thought to trigger gout attacks. Further, how much alcohol intake is needed to increase the risk of gout attack is not known. We examined the quantity and type of alcohol consumed on risk of recurrent gout attacks.
Methods

We conducted a prospective internet-based case-crossover study in the United States among participants with gout and who had at least one attack during the one year of follow-up. We evaluated the association of alcohol intake over the prior 24 hours as well as the type of alcoholic beverage with risk of recurrent gout attack, adjusting for potential time-varying confounders.
Results

This study included 724 participants with gout (78% men, mean age 54 years). There was a significant dose-response relationship between amount of alcohol consumption and risk of recurrent gout attacks (p

1-2 and >2-4 alcoholic beverages, respectively, compared with no alcohol consumption in the prior 24 hours. Consuming wine, beer, or liquor, was each associated with an increased risk of gout attack.
Conclusions