They keep tanning, even after turning a deep brown and experiencing some of the negative consequences. Skin cancer is among the most common, preventable types of the disease, yet many continue to tan to excess.

Research from Lisham Ashrafioun, a Bowling Green State University Ph.D. student in psychology, and Dr. Erin Bonar, an assistant professor of psychiatry at the University of Michigan Addiction Research Center and a BGSU alumna, shows that some who engage in excessive tanning may also be suffering from obsessive-compulsive (OCD) and body dysmorphic disorders (BDD). Ashrafioun and Bonar also looked at whether tanning should be classified as an addiction.

Their paper, “Tanning Addiction and Psychopathology: Further Evaluation of Anxiety Disorders and Substance Abuse,” is currently in press in the Journal of the American Academy of Dermatology and will be published later this year.

“While more research is needed regarding to idea of tanning as an addiction, this study suggests that some people who tan also experience mental health symptoms that warrant further assessment,” said Bonar. “Although tanning behavior could be separate and distinct from these concerns, it’s possible that the symptoms of OCD or BDD are contributing to the tanning in some way. For these people, prevention messages and public health campaigns may not be as helpful, but further assessment and treatment could be.”

Respondents who answered yes to at least three of the eight criteria on the Tanning-DSM were considered tanning dependent. The Tanning-DSM is a modified version of substance abuse criteria provided by the 4th Edition of the Diagnostic and Statistical Manual of Mental Disorders.

Those who answered yes to two of the four questions on the tanning-specific version of the CAGE alcohol screener were considered to have problematic tanning. 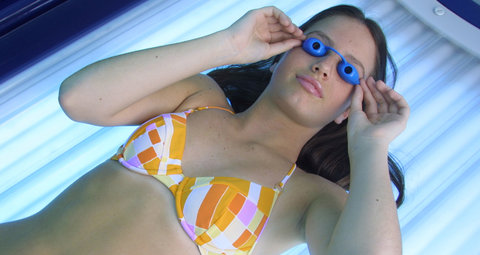 Out of 533 tanning BGSU students who took the questionnaire, 31 percent met the criteria for tanning dependence and 12 percent for problematic tanning.

How Tanning Changes the Brain
People who frequently use tanning beds experience changes in brain activity during their tanning sessions that mimic the patterns of drug addiction, new research shows.

Scientists have suspected for some time that frequent exposure to ultraviolet radiation has the potential to become addictive, but the new research is the first to actually peer inside the brains of people as they lay in tanning beds.

What the researchers found was that several parts of the brain that play a role in addiction were activated when the subjects were exposed to UV rays. The findings, which appear in the coming issue of the journal Addiction Biology, may help explain why some people continue to tan often despite awareness about risks such as skin cancer, premature aging and wrinkles.

“What this shows is that the brain is in fact responding to UV light, and it responds in areas that are associated with reward,” said Dr. Bryon Adinoff, a professor of psychiatry at the University of Texas Southwestern Medical Center and an author of the study. “These are areas, particularly the striatum, that we see activated when someone is administered a drug or a high-value food like sugar.”

“It may be that some individuals in our sample engage in excessive tanning because of obsessive thoughts about, or the compulsion to tan, or because tanning is a strategy for relaxation to decrease OCD symptoms,” explained Ashrafioun. “If problem tanning is conceptualized as an addictive disorder, obsessions and compulsions about tanning may instead represent craving to tan.”

The odds of meeting the screening criteria for problematic tanning and tanning dependence was strongest for participants who tanned at least nine times in the past 30 days.

“We have tanning addiction in the title, but we don’t jump to the conclusion automatically that tanning is and can be an addiction,” Ashrafioun said. “We’re saying that we shouldn’t necessarily rule this out especially if people are tanning excessively, even if they aren’t experiencing any OCD or body dysmorphic disorder. Because of this problem we should look at the potential for tanning addiction more.”

The researchers did admit to several limitations with their study. The rates of positive screens for OCD and BDD in this sample differed from those reported in other college samples and were higher than national prevalence estimates for either disorder. In addition, they note that the Tanning-CAGE and Tanning-DSM may overestimate the rates of problematic tanning and tanning dependence that they found. However, they say future research should evaluate relationships between excessive tanning and formal clinical diagnosis of each of these conditions.

“We see this as more potential evidence and firepower for continuing to research the conceptualizing of excessive tanning as an addiction,” Ashrafioun said. “Previously, clinicians educated patients on the harms of tanning. It’s probably more than that - most people know there are harms, but they continue to do it. We need to be more focused on intervention than just telling people it’s bad for them.

“Trying to help people whether they be dermatologists or primary care physicians to use a screen like this will help them determine if they should assess individuals further to see if they have a bigger problem with tanning.”

Studies suggest that compulsive tanning is startlingly widespread, particularly among teens and people in their early twenties. A 2008 study of Virginia college students by researchers at Fox Chase Cancer Center concluded that 27 percent had symptoms of dependence upon tanning that were similar to symptoms in alcohol and drug-addicted people. The tanning addicts who showed an increasing craving for more and more UV exposure had difficulty controlling their time in the sun or their use of tanning beds, even though they knew its potentially harmful effects on their skin. While natural sunlight held a more powerful allure than the artificial kind, about 40 percent of the tanning addicts used tanning beds, which enabled them to get their fix even on cloudy days. Some even used tanning beds on sunny days [source: Science Daily].

The Fox Chase researchers found that those addicted to tanning were also more likely to be excessively thin and smoke cigarettes than other students. And those findings dovetail other research that shows excessive tanners are more likely to consume higher levels alcohol, marijuana and other illicit drugs [source: Gardner]. This research is significant because it suggests that UV junkies may have the same sort of mental problem - that is, a brain genetically predisposed to addiction - that drug addicts have.

Tanning addiction and psychopathology: Further evaluation of anxiety disorders and substance abuse Results Both problematic tanning and tanning dependence were significantly associated with being female (P < .001 and P < .001, respectively) and with screening positive on measures of obsessive-compulsive (P < .001 and P = .005, respectively) and body dysmorphic (P = .019 and P < .001, respectively) disorders. Frequency of tanning in the past month was the strongest correlate of problematic tanning (P < .001) and tanning dependence (P < .001) when included in a model that controlled for shared variance among demographics and psychopathology. Limitations The sample was recruited from 1 university and contained only self-report measures. Conclusion Results suggest that many who engage in excessive tanning may also have significant psychiatric distress. Additional research is needed to characterize compulsive, problematic tanning and its rates, correlates, and risk factors among diverse samples. ### Lisham Ashrafioun, MA Erin E. Bonar, PhD Journal of the American Academy of Dermatology Volume 70, Issue 3 , Pages 473-480, March 2014s
Provided by ArmMed Media