Most African-Americans say they’d call 9-1-1 if stroke symptoms occurred - but few do, according to research reported in Stroke: Journal of the American Heart Association.

In a survey of 253 African-Americans in Washington, D.C., 89 percent said they’d call 9-1-1 at the first sign of a stroke. Yet, only 12 percent of 100 stroke patients surveyed in the predominantly black District of Columbia called 9-1-1 right away when faced with symptoms.

Blacks are at greater risk for stroke and are more likely to die compared to whites due to higher rates of risk factors such as high blood pressure and obesity.

Prompt hospital arrival is critical because intravenous clot-busting drugs can prevent permanent stroke damage if administered within three hours of the onset of stroke symptoms.

Among 100 real-life stroke patients in the study:

* Of those who suspected they were having a stroke, only half arrived at the hospital via ambulance.

* Of those who arrived by ambulance, 35 percent did so only because they had no other transportation.

“We found that virtually no one knew that treatment was available and that getting to the hospital quickly means right now - as in drop everything,” said Amie W. Hsia, M.D., the study’s lead author, an assistant professor in the Georgetown University Department of Neurology and medical director of the Washington Hospital Center Stroke Center in Washington, D.C. “With every minute that passes, more brain cells die.”

For the study, researchers examined whether big city residents received adequate stroke information and if they realized patients fared much better when treated immediately. They gave the volunteers scenarios that featured hypothetical stroke symptoms. They also interviewed 100 stroke patients or the people who accompanied the patients to the hospital. 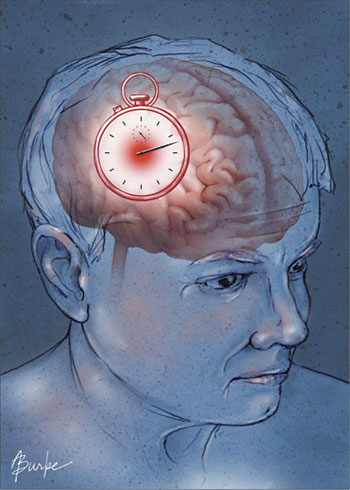 The disconnect was “striking” when comparing what volunteers said they would do hypothetically and what most people did when real stroke symptoms surfaced, Hsia said.

“Stroke doesn’t typically cause pain or cause patients to collapse, so some will go to bed and hope they feel better,” she said. “Or they want confirmation that what is happening is serious and is worthy of calling 9-1-1, so they call a family member or friend first.”

In addition to the potential of receiving clot-busters, patients arrive faster in an ambulance, the hospital can be alerted in advance by EMS and patients who arrive by ambulance are given priority in the hospital and are therefore treated sooner, Hsia said.

“That information doesn’t seem to have gotten into the D.C. community enough,” Hsia said. “If you show up in your car, the hospital has to triage and figure out how serious your symptoms are, which takes more time.”

Researchers conducted the study in an effort to identify disparities in care and outcomes between black and white stroke patients. Further research is needed to determine and conquer the barriers between “behavioral intent” and “actual behavior,” Hsia said.

The National Institute of Neurological Disorders and Stroke and the National Center on Minority Health and Health Disparities funded the research.

* Sudden numbness or weakness of the face, arm or leg, often on only one side of the body
* Sudden confusion and trouble speaking or understanding others
* Sudden difficulty seeing
* Sudden trouble walking, feelings of dizziness and loss of balance or coordination
* Sudden severe headache of unknown cause

The presence of any of these signs warrants a call to 9-1-1 for immediate medical attention.

Statements and conclusions of study authors published in American Heart Association scientific journals are solely those of the study authors and do not necessarily reflect the association’s policy or position. The association makes no representation or guarantee as to their accuracy or reliability. The association receives funding primarily from individuals; foundations and corporations (including pharmaceutical, device manufacturers and other companies) also make donations and fund specific association programs and events. The association has strict policies to prevent these relationships from influencing the science content.