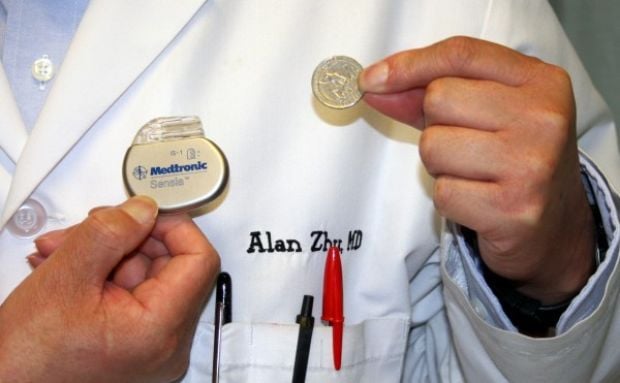 Patients are test driving a pacemaker outside the skin before deciding whether to have a permanent implant, reveals novel research presented today at EHRA EUROPACE - CARDIOSTIM 2015 by Professor Michael Giudici, director of arrhythmia services in the Department of Internal Medicine, University of Iowa Hospitals and Clinics, Iowa City, US.1

“Wow, I didn’t realise how terrible I felt. This is great. When can we schedule my pacemaker?”

The joint meeting of the European Heart Rhythm Association (EHRA) of the European Society of Cardiology (ESC) and Cardiostim is held in Milan, Italy. The scientific programme is here : http://www.flipsnack.com/Escardio/ehra-europace-cardiostim-2015-advance-programme.html

Professor Giudici said: “By doing this procedure we allow the patient to see the before and after, so they can make a much more informed decision.”

He added: “Patients have numerous concerns, such as body image issues. There will be an incision in the upper chest, perhaps some discolouration of the skin and a lump which may be visible depending on what you wear. In women there are intimacy issues with upper chest device implants and we usually consider a submammary location. Older people worry that their grandchildren will bump their heads on the pacemaker which can be uncomfortable. There are also issues with simply having a device inside the body, „am I getting old?, and „do I have a heart problem?.”

Professor Giudici came up with the idea for a test drive after using the technique successfully in patients who were already dependent on a pacemaker but needed to have it removed temporarily because of a device infection. These patients had all their hardware removed and were required to take antibiotics to clear the infection before receiving a new permanent device.

The current study was conducted in patients with bradycardia (slow heart rate). Over a period of nearly four years, six patients aged 40 to 82 years were offered a two to three week test drive to allow them to assess the potential benefits of permanent pacemaker implantation.

Procedures were conducted in an electrophysiology lab. A needle was stuck directly into the subclavian or axillary vein and a permanent pacing lead (or leads) was passed percutaneously and attached in the atrium or ventricle (or both). The leads were fixed to the skin and attached to a non-sterile permanent pacemaker which was sewn to the skin and covered with a waterproof dressing. The pacemaker was programmed to a rate-response mode at an appropriate heart rate for each patient and removed after two to three weeks.

All six patients subsequently chose to have a permanent pacemaker implanted under the skin. There were no complications associated with the initial implantation procedure, the trial period, or device removal.

Professor Giudici said: “The pacemaker is placed outside the chest and there is no incision but it is the same device used for implants, so patients experience the real impact. They tell us their exercise tolerance, quality of life, and in some people even their alertness has improved as a result of pacing. They’ve commented, „wow, I didn’t realise how terrible I felt. This is great. When can we schedule my pacemaker?”

He added: “The test drive enables patients to go into their procedure much more confident that the pacemaker is going to do them some good. It also allows the patient to make the choice, which ultimately makes them much happier than if the doctor just tells them they need it.”

Professor Giudici concluded: “This is a simple procedure that lets patients try out a pacemaker before committing to an invasive procedure. Many patients start to feel better and that outweighs any potential downsides to having it. This study was in patients with bradycardia but patients with a very irregular heart rhythm might also find test driving a pacemaker useful.”

The European Society of Cardiology (ESC) represents more than 80 000 cardiology professionals across Europe and the Mediterranean. Its mission is to reduce the burden of cardiovascular disease in Europe. The European Heart Rhythm Association (EHRA) is a registered branch of the ESC. Its aim is to improve the quality of life of the European population by reducing the impact of cardiac arrhythmias and reduce sudden cardiac death.