Non-Surgical Outpatient Procedure Treats Varicose Veins
Venous insufficiency is a very common condition resulting from decreased blood flow from the leg veins up to the heart, with pooling of blood in the veins. Normally, one-way valves in the veins keep blood flowing toward the heart, against the force of gravity. When the valves become weak and don’t close properly, they allow blood to flow backward, a condition called reflux. Veins that have lost their valve effectiveness, become elongated, rope-like, bulged, and thickened. These enlarged, swollen vessels are known as varicose veins and are a direct result of increased pressure from reflux. A common cause of varicose veins in the legs is reflux in a thigh vein called the great saphenous, which leads to pooling in the visible varicose vein below.

How Common Is This Condition?

Chronic venous disease of the legs is one of the most common conditions affecting people of all races. 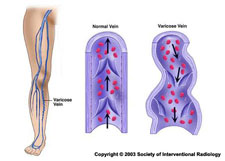 Symptoms caused by venous insufficiency and varicose veins include aching pain, easily tired legs, and leg heaviness, all of which worsen as the day goes on. Many people find they need to sit down in the afternoon and elevate their legs to relieve these symptoms. In more severe cases, venous insufficiency and reflux can cause darkening of the skin and wounds that may be very difficult to treat. One percent of adults over age 60 have chronic wounds known as ulcers.

People who have venous insufficiency can have symptoms even without visible varicose veins. The symptoms are caused by pressure on nerves by dilated veins.

An interventional radiologist, a doctor specially trained in performing minimally invasive treatments using imaging guidance, will use duplex ultrasound to assess the venous anatomy, vein valve function, and venous blood flow changes, which can assist in diagnosing venous insufficiency. The doctor will map the great saphenous vein and examine the deep and superficial venous systems to determine if the veins are open and to pinpoint any reflux. This will help determine if the patient is a candidate for a minimally invasive treatment, known as vein ablation.

Vein Ablation
This minimally-invasive treatment is an outpatient procedure performed using imaging guidance. After applying local anesthetic to the vein, the interventional radiologist inserts a thin catheter, about the size of a strand of spaghetti, into the vein and guides it up the great saphenous vein in the thigh. Then laser or radiofrequency energy is applied to the inside of the vein. This heats the vein and seals the vein closed.

Reflux within the great saphenous vein leads to pooling in the visible varicose veins below. By closing the great saphenous vein, the twisted and varicosed branch veins, which are close to the skin, shrink and improve in appearance. Once the diseased vein is closed, other healthy veins take over to carry blood from the leg, re-establishing normal flow. 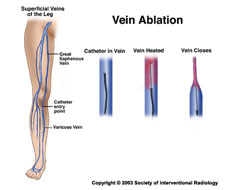 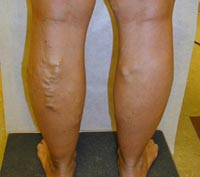 Many insurance carriers cover the vein ablation treatment, based on medical necessity for symptom relief.

Surgical Treatment of Veins
Traditionally, surgical ligation or vein stripping was the treatment for varicose veins, but these procedures can be quite painful and often have a long recovery time. In addition, there are high rates of recurrence with the surgical procedures. One study found a 29% recurrence rate after ligation and stripping of the greater saphenous vein, and a rate of 71% after high ligation. These recurrence rates are similar to those reported in other studies. 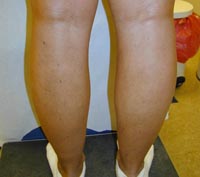 Additional Treatments for Varicose Veins
Ambulatory phlebectomy is a minimally invasive surgical technique used to treat varicose veins that are not caused by saphenous vein reflux. The abnormal vein is removed through a tiny incision or incisions using a special set of tools. The procedure is done under local anesthesia, and typically takes under an hour. Recovery is rapid, and most patients do not need to interrupt regular activity after ambulatory phlebectomy.

Injection sclerotherapy can also be used to treat some varicose and nearly all spider veins. An extremely fine needle is used to inject the vein with a solution which shrinks the vein.

Ultrasound-guided sclerotherapy involves an interventional radiologist passing a thin tube called a catheter into the vein using ultrasound guidance and injecting substance that causes the veins to scar and close – rerouting the blood to healthier veins. The affected vein forms a knot of scar tissue that is absorbed by the body over time.

Behavioral changes can help prevent the formation of varicose veins.

Endoscopic repair is performed in advanced cases of vascular disease involving sores or ulcers on the legs. Surgeons insert an endoscopic camera into the varicose vein via small incisions to visualize and treat the defects.